Ram Temple in Ayodhya: Jagdish Sewhani, President of the American India Public Affairs Committee said that they were celebrating a 'once in a mankind' event 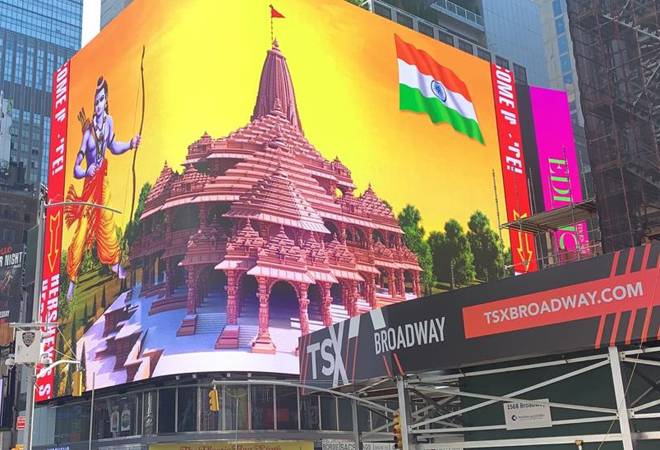 Jagdish Sewhani, President of the American India Public Affairs Committee that organised the Times Square celebrations and bought the prime billboard space disputed reports that the advertisement was to be cancelled. Sewhani told Associated Press that they were just celebrating a "once in a mankind" event and that the celebrations were not against anyone. "This is a once in a mankind event and we thought what better place for it than Times Square," he said.

As described by Sewhani, the American India Public Affairs Committee is a group of people concerned with India-US relations. The committee does not have a website and there is no corporation registered under its name, as stated by the report in Associated Press. Sewhani had also earlier described himself as one of the founders of the US wing of the Bharatiya Janata Party, in an interview to South Asian Insider Show.

The coalition opposing the advertisements had written to New York Mayor Bill de Blasio asking him to stop the display. Shaik Ubaid, President of Indian Minorities Advocacy Network told the news agency that the ads glamorise a cruel act. "They are so confident they are doing this in Times Square, the heart of America," he told the news agency.

Prime Minister Narendra Modi took part in the bhoomi pujan or the groundbreaking ceremony on Wednesday. The PM first visited the Hanumangarhi Temple to offer his prayers. He also offered prayers to Ram Lalla before laying the foundation stone.

Also read: Ram Mandir Bhoomi Pujan Highlights: With temple construction, history is not only being made but repeated, says PM Modi