Ram Mandir Bhoomi Pujan Highlights: With temple construction, history is not only being made but repeated, says PM Modi

Ayodhya Ram Mandir Bhoomi Pujan Live: "I believe the grand Ram Temple in Ayodhya, like the name of Shri Ram, will reflect the rich heritage of Indian culture and inspire the entire humanity till eternity," says PM Modi Ram Mandir Bhumi Pujan in Ayodhya: Every heart is illuminated; it's an emotional moment for the entire country, says PM Modi

Prime Minister Narendra Modi, during the foundation laying ceremony of Ram Temple in Ayodhya on Wednesday, said a grand temple will now be built for Ram Lalla who, he said, had been staying in a tent for years. He also said that today, Ram Janmbhoomi breaks free of the cycle of breaking and getting built again, which had been going on for centuries. The PM said Ram Temple will become the modern symbol of India's rich traditions, devotion and national sentiment. He said with the construction of this temple, not only history is being made, but is being repeated. "We'll have to remember that whenever mankind believed in Lord Ram, progress took place. Whenever we deviated from path, doors to destruction opened. We'll have to keep everyone's sentiments in mind. We've to ensure everyone's development with support & trust of all," he said.

Check out all the latest updates on Ayodhya Ram Mandir Bhumi Pujan on BusinessToday.In live blog

2.15 PM: Ram showed us how to perform our duties, he showed us the path of self-relialisation, says PM Modi

2.10 PM: We have to ensure everyone's progress by taking all everyone along, says PM Modi

I believe this grand Ram Temple built in Ayodhya, like the name of Shri Ram, will reflect the rich heritage of Indian culture, says PM.

1.58 PM: Due to the conditions created by the coronavirus, this programme of Bhoomi Pujan is taking place amidst many limitations, says the PM.

1.57 PM: Today is the proof of the truth and resolve of crores of devotees, says the PM

1.56 PM: This process of construction of Ram temple is an attempt to connect the nation, says PM Modi

The PM has said the Ram Temple in Ayodhya will become the modern symbol of India's rich traditions. "It'll become a symbol of our devotion, our national sentiment. This temple will also symbolise the power of collective resolution of crores of people," he said.

It's my fortune that I have been invited to take part in this historic event. I thank the Shri Ram Janmabhoomi Trust for this. Today, the entire country is immersed in Lord Ram, says PM Modi

"A grand temple will now be built for our Ram Lalla who had been staying in a tent. Today Ram janmbhoomi breaks free of the cycle of breaking and getting built again - that had been going on for centuries," says PM Narendra Modi. - ANI

Prime Minister Narendra Modi says the 'Jai Siyaram' call is resonating not only in the city of Lord Ram but throughout the world today. "I express gratitude to all citizens of this nation, Indian diaspora across the world and all the devotees of Lord Ram on today's pious occasion."

1.28 PM: Advani ji must be at his home watching this: Bhagwat

1.26 PM: India has shown how matters be resolved peacefully: Yogi

Under the leadership of PM Narendra Modi, the power of India's democratic values and its judiciary has shown the world that how can matters be resolved peacefully, democratically and constitutionally, says UP CM Yogi Adityanath.

Maryada Purushottam Lord Ram is the manifestation of the best human qualities. They are the core of humanity in the depths of our mind, says Rahul Gandhi.

A grand temple will now be built for our Ram Lalla who had been staying in a tent. Today Ram janmbhoomi breaks free of the cycle of breaking and getting built again - that had been going on for centuries: PM Narendra Modi. #RamMandirpic.twitter.com/xohyQreFs6

1.14 PM: It defines our spirit of social harmony: President

Felicitations to all for the foundation laying of Ram Temple in Ayodhya. Being built in tune with law, it defines India's spirit of social harmony and people's zeal, says President Ram Nath Kovind.

The Shiv Sena on Wednesday said those who forget the sacrifices of 'kar sevaks' at the time of 'bhoomi pujan' of the Ram temple construction in Ayodhyawill be "Ram drohi". The 'bhoomi pujan' event is of the entire country and Hindus. But what is this adamant stand that nobody should get credit, the Sena wondered in an editorial in party mouthpiece 'Saamana'. - PTI

From Sri Rama Temple Rajajinagar, Bengaluru, to prayers in BJP office at Kamalalayam, Tamil Nadu, prayers are being offered in different parts of the country to mark the ground-breaking ceremony at the Ram Temple in Ayohya.

"Nine bricks are kept here. These were sent by devotees of Lord Ram from around the world in 1989. There are 2 lakh 75 thousand such bricks out, of which 100 bricks with 'Jai Shri Ram' engraving have been taken," says Priest at Ram Temple 'Bhoomi Pujan'. (ANI)

Felicitations to all for the foundation laying of Ram Temple in Ayodhya. Being built in tune with law, it defines India’s spirit of social harmony and people’s zeal. It will be a testimony to ideals of RamRajya and a symbol of modern India.

As per the tradition, Prime Minister Narendra Modi offers prayers at Hanuman Garhi Temple before proceeding to Ram Janmabhoomi site. UP CM Yogi Adityanath will also accompanying him. Before 'Bhoomi Pujan', the PM will plant a Parijat (night-flowering jasmine) sapling.

RSS Chief Mohan Bhagwat has reached the Ram Janmabhoomi pujan site in Ayodhya. He will also take part in the ceremony along with PM Modi and others.

PM Modi after reaching Ayodhya will first visit the 10th century Hanumangarhi Temple, to offer prayers to Hanuman as per tradition. The premises of the temple were sanitised earlier today. After praying at the temple, PM Modi will proceed to Ram Janmabhoomi site to offer prayers to Ram Lalla and lay the foundation stone for Ram Mandir.

11.09 am: Patanjali to make gurukul at Ayodhya, says Baba Ramdev

Baba Ramdev says that it is "India's biggest fortune that we are witnessing the Ram Mandir event" adding that to establish Ram Rajya in India, "Patanjali Yogpeeth will construct a grand gurukul in Ayodhya" and people from all over the world "will be able to study Ved, Ayurved here."

Madhya Pradesh Chief Minister Shivraj Singh Chouhan said on Wednesday that "PM will lay the foundation stone of Ram Mandir today in Ayodhya. The 'mahayagya' which started 500 years ago, is culminating today. The willpower and resolve shown by PM Narendra Modi has today made him the tallest leader of India in the last 500 years."

10.56 am: Uma Bharti tweets ahead of Ram Mandir Bhoomi pujan

BJP leader Uma Bharti has reached the Ram Janmabhoomi site in Ayodhya for the foundation laying ceremony. She had earlier said she would skip the event and visit the site sometime later. In a tweet she said, "I am devoted to Lord Ram. I am here on the orders of Ram Janmabhoomi Nyas."

10.48 am: Ayodhya all decked up ahead of Ram Mandir Bhoomi pujan; see visuals here 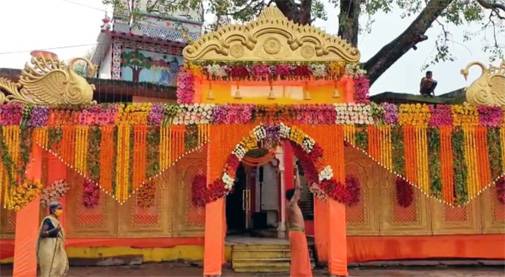 PM Modi has reached the Lucknow airport from where he will fly to Ayodhya in a chopper.

Iqbal Ansari, one of the key litigants in the Ayodhya land dispute case, has reached Ayodhya for the Ram Mandir Bhoomo Pujan ceremony. Ansari was one of the first persons to be invited by the Ram Janmabhoomi Trust for the event.

UP CM Yogi Adityanath has reached Ayodhya to take part in Ram Janmabhoomi Pujan ceremony. PM Modi who is enroute to Lucknow, will land at Lucknow airport soon from where he will take a chopper to Ayodhya.

Lucknow Police Commissioner Sujeet Pandey has reached the Lucknow airport to take stock of security arrangements and preparedness. PM Modi is scheduled to land at the Lucknow airport shortly from where he will take a chopper to reach Ayodhya to lay the foundation stone of Ram Temple.

Congress MP Shashi Tharoor tweets: Lord Shri Ram epitomises justice for all, righteous conduct, fairness&firmness in all dealings, moral rectitude &courage. These values are much needed in such dark times. If they spread throughout the land, Ram Rajya would not be an occasion for triumphalist bigotry. #JaiShriRam!

10.12 am: Locals in Ghaziabad sing bhajans

Members of Indian community in USA assembled outside the Capitol Hill in Washington DC to celebrate the foundation laying ceremony of Ram Temple in Ayodhya.

The ground breaking ceremony for laying the foundation of Ram Lalla Mandir at Ram Janmabhoomi in Ayodhya is set to begin shortly. PM Modi has already left for Lucknow from where he will fly to Ayodhya in a chopper. UP Chief Minister Yogi Adityanath and Governor Anandiben Patel along with several other dignitaries are also slated to take part in the ceremony. Check the pooja time, guest list, estimated cost, and other details in the link below.

Prime Minister Narendra Modi has left for Ayodhya in a special jet. He will land in Lucknow at 11.30 am from where he will take a chopper to fly to Ayodhya.

PM Modi's Convoy starts off for Ayodhya from his residence 9.22 am: Ram mandir bhoomi pujan: Who all will share stage with PM Modi

9.14 am: UP CM Yogi Adityanath leaves for Ayodhya

Uttar Pradesh Chief Minister Yogi Adityanath leaves has left for Ayodhya to be a part of the ceremonial rituals of Ram Mandir Bhoomi Pujan. Adityanath will attend the event along with PM Modi and RSS Chief Mohan Bhagwat.

9.06 am: Ram Janmabhoomi: 'Babri Masjid was and will always be a Masjid,' tweetsAll India Muslim Personal Law Board

Babri Masjid was and will always be a Masjid. #HagiaSophia is a great example for us. Usurpation of the land by an unjust, oppressive, shameful and majority appeasing judgment can't change its status. No need to be heartbroken. Situations don't last forever.

Lord ShriRam epitomises justice for all, righteous conduct, fairness&firmness in all dealings, moral rectitude &courage. These values are much needed in such dark times. If they spread throughout the land, Ram Rajya would not be an occasion for triumphalist bigotry. #JaiShriRam!

USA: Members of the Indian community gathered outside the Capitol Hill in Washington DC to celebrate the foundation laying ceremony of #RamTemple in #Ayodhyapic.twitter.com/NofEWuM3E5

8.56 AM: Sachin Pilot on Groundbreaking Day

#BabriMasjid was and will always be a Masjid. #HagiaSophia is a great example for us. Usurpation of the land by an unjust, oppressive, shameful and majority appeasing judgment can't change it's status. No need to be heartbroken. Situations don't last forever.#ItsPoliticspic.twitter.com/nTOig7Mjx6

8.45 AM: It's an auspicious day. May the entire world prospers: Shivraj Singh Chouhan

"Original document of the Constitution of India has a beautiful sketch of Lord Ram, Mata Sita and Laxman returning to Ayodhya after defeating Ravan. This is available at the beginning of the chapter related to Fundamental Rights," says the minister.

8.35 AM: When and where to watch live telecast

One can watch the live telecast of the much-awaited ceremony at the Doordarshan TV channel. India Today TV and Aaj Tak will provide detailed coverage of the event. One can also watch on India Today Live TV or AajTak Live TV on YouTube. Moreover, BusinessToday.in will provide you with all the latest updates.

The entire ceremony will be six-hour-long, starting at 8 AM and continuing till 2 PM. The actual Bhumi Pujan will begin at 12:30 PM and Prime Minister Narendra Modi will lay the foundation stone at 12:40 PM.

Prime Minister Narendra Modi will be the main guest for the Bhumi Pujan ceremony, accompanied by Uttar Pradesh Governor Anandben Patel and Chief Minister Yogi Adityanath. Several other leaders and political dignitaries, sages and seers will also attend the event in Ayodhya.

8.12 AM: Security and COVID-19 protocol to be followed at Ayodhya's Hanuman Garhi temple, say  authorities