While the RBI cut repo rate by 2.6 per cent since 2014, SBI cut its floating rate by 1.1 per cent only; experts cite a slowdown in household savings, bad loans, and persistent liquidity crunch in NBFC as reason for slow transmission The Reserve Bank of India (RBI) reduced the repo rate by 35 basis points to 5.4 per cent on Wednesday, its fourth straight cut since February 2019, but banks have not matched the benefit in the loan rates offered to their customers. The high-powered Monetary Policy Meet, chaired by RBI governor Shaktikanta Das, in February saw repo rate cut of 25 basis points to 6.25 from 6.5 per cent. Since then, the MPC has done four consecutive repo rate cuts. However, banks have shied away from reciprocating the benefit to ease the burden on customers.

Ideally, banks are supposed to pass on the benefit immediately after the repo rate cut, which can bring the interest rates on loans, including home loan EMIs, down significantly. Experts cite the slowdown in household savings, bad loans, and persistent liquidity crunch in the NBFC (non-banking finance companies) sector as the major reasons behind banks not adjusting lending and deposit rates. 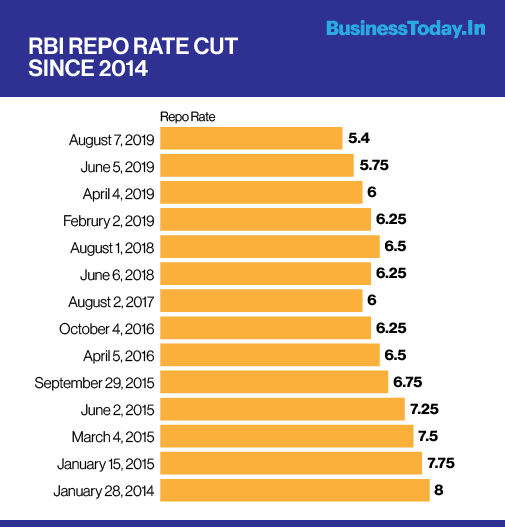 Also read: RBI repo rate cut: How much will your home and car loan EMIs reduce?

The RBI, however, is hopeful. In its bi-monthly meeting held today, the RBI said the transmission of policy repo rate cuts on fresh rupee loans had improved marginally in the past two months.  "Overall, banks reduced weighted average lending rates (WALRs) -- the aggregate rate of interest paid on all debts -- on fresh rupee loans by 29 basis points during February-June 2019 period," said the MPC.

Meanwhile, immediately after the RBI rate cut on Wednesday, State Bank of India reduced lending rates (MCLR) by 15 bps across all tenors effective August 10. The bank has also reduced one-year lending rates to 8.25 per cent from earlier 8.4 per cent. Before this, SBI reduced interests offered on time deposits of up to 179 days by 50-75 basis points, effective from August 1. The SBI also slashed interest rates on retail deposits by 20 bps and 35 bps in the wholesale segment.

Surendra Hiranandani, Chairman and Managing Director, House of Hiranandani, stated that going forward, "it is imperative for banks to reduce the lending rates and ensure that the home loan borrowers reap the benefits of this move". Real estate, he noted, is a highly cost sensitive sector. "Demand will only pick up if the cut is substantial to result in significant cost savings".