The statement came days after Prime Minister Narendra Modi said that a mutually beneficial RCEP, in which all sides gain reasonably, is in interests of India and of all the partners. 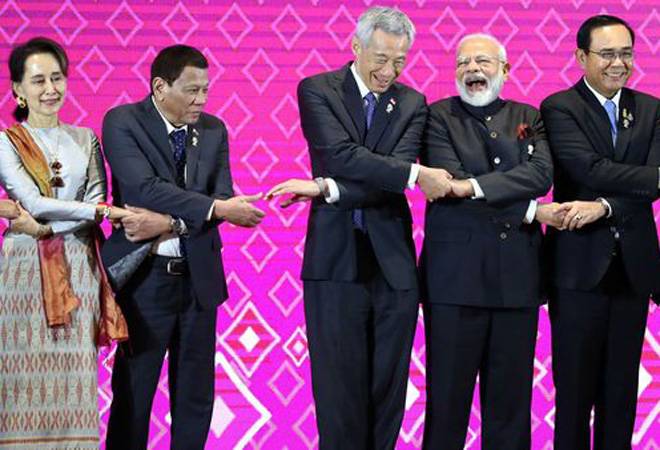 China on Monday said negotiations to firm up the RCEP deal during the ASEAN meeting in Bangkok have made "inspiring progress" though they may not fully meet the expectations of all the parties.

The statement came days after Prime Minister Narendra Modi said that a mutually beneficial Regional Comprehensive Economic Partnership (RCEP), in which all sides gain reasonably, is in interests of India and of all the partners.

The RCEP agreement is being negotiated among 10 ASEAN members -- Brunei, Cambodia, Indonesia, Laos, Malaysia, Myanmar, the Philippines, Singapore, Thailand, and Vietnam -- and their six trade partners which are Australia, China, India, Japan, South Korea and New Zealand to create a free trade pact covering a third of the world's economy.

Prime Minister Modi and leaders of 15 Asia-Pacific countries are holding talks in Bangkok for the successful conclusion of seven-year negotiations to create the world's largest free trade region.

Asked about reports of delay in finalising the agreement among the 16 countries, Chinese Foreign Ministry spokesman Geng Shuang told a media briefing here that "as I understand the progress made may not fully meet the expectations of all parties but we have seen inspiring progress and all parties also say they will make joint efforts for conclusion of the treaty.

"I shall say that this sent out a positive signal from the East Asian countries in support of multilateralism and free trade, and we hope all parties will continue to engage in negotiations in a constructive way and work together to achieve substantial and final results for the negotiations".

Geng said the RCEP is the largest and most important trade agreement in the Asia Pacific region.

"This FTA (Free Trade Agreement) will inject strong impetus into the regional economic integration. With the joint efforts of our members the RCEP negotiations made important progress. Now all parties are in close contact and we will hold the third leaders meeting later on," he said.

Reports from Bangkok said the possible delay in firming up the RCEP during the three-day ASEAN summit in Bangkok has been attributed to India's "new demands" on market access and tariff related issues.

India has been forcefully raising the issue of market access as well as protected lists of goods mainly to shield its domestic market as there is fear that the country may be flooded with cheap Chinese agricultural and industrial products once it signs the deal.

Prime Minister Modi on Saturday said addressing India's concerns over unsustainable trade deficits remained important and that opening the vast Indian market must be matched by openings in some areas where Indian businesses can benefit.

"We have put forward reasonable proposals in a clear manner and are engaged in negotiations with sincerity. We would like to see commensurate levels of ambition on services from many of our partners, even as we are ready to address their sensitivities," Modi said in an interview to Bangkok Post newspaper.

"Overall, we are clear that a mutually beneficial RCEP, in which all sides gain reasonably, is in interests of India and of all partners in the negotiations," he said.

Tata Power creates a new arm to set up 10,000 microgrids in India