India Brazil bilateral ties: After wide ranging talks between PM Modi and President Bolsonaro, India and Brazil are reported to have a bilateral trade of $15 billion by 2022 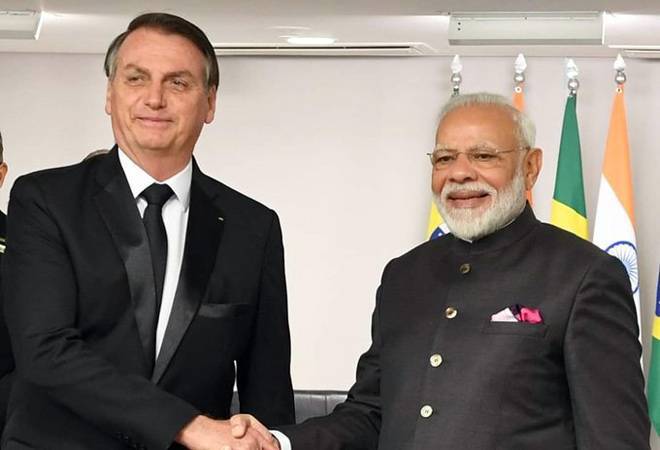 India Brazil ties: Cooperation is likely to be expanded in sectors such as oil,gas and mining

Hit by economic slowdown, India and Brazil on Saturday drew up an ambitious plan to boost their stuttering economies by significantly expanding cooperation in key sectors like oil, gas and mining, while setting a target of USD 15 billion in bilateral trade by 2022. The decisions were taken during wide-ranging talks between Prime Minister Narendra Modi and Brazilian President Jair Messias Bolsonaro.

On Brazil approaching the WTO against India for extending support to sugarcane growers, sources said it was agreed to address the issue through bilateral consultations. The two leaders recognised that there were great synergies between India and Brazil, the two large economies with a combines GDP of around USD 4.5 trillion and having a total population of 1.5 billion. The volume of bilateral trade in 2018-10 was USD 8.2 billion which included USD 3.8 billion worth of Indian exports to Brazil and USD 4.4 million as imports by India. The two sides inked an investment cooperation and facilitation treaty providing for a framework to increase trade and investment in high growth areas.

A separate pact was inked for cooperation in the field of oil and natural gas while another one was sealed in the bio-energy sector. "There is significant potential for further strengthening the energy partnership taking into account that India is one of the leading countries in global oil demand growth and that Brazil is expected to sharply increase its oil production in the next decade," according to a joint statement issued after Modi-Bolsonaro talks.

It said the two leaders committed to explore ways of deepening bilateral relations in the energy field. Apart from oil and gas, the other areas identified for expansion of cooperation included agriculture, bio-fuels, animal husbandry, health and science and technology.

"The two sides also agreed to set a target of USD 15 billion in bilateral trade by 2022 given the complementarities between the two economies," External Affairs Ministry Spokesperson Raveesh Kumar said. In the talks, the two sides also agreed that there was a great potential for increased ethanol production and uptake in India's fuel mix and looked forward to further collaboration in the area.

It was decided that both sides will encourage their companies to explore ways for promoting investments and cooperation in the upstream, midstream and downstream areas, through sharing of experience including through joint development activities in oil and gas projects in India, Brazil and in third countries. "It was noted that Indian oil and gas sector offers investment opportunities to Brazilian companies in exploration and licensing of upcoming fields, operationalization of already discovered fields and related projects," the joint statement said.

In the mining sector, the two sides agreed that mining activities and investments offered a significant potential for enhancing bilateral cooperation in this sector. During the talks, Prime Minister Modi invited Brazilian industry to explore business opportunities in India in infrastructure, food processing, bio-fuels and other renewable energy sources, animal husbandry and agro sectors.

President Bolsonaro also called upon Indian industry to identify business opportunities, including in Brazil's automotive, leather, oil and gas, including oil refining, and pharmaceutical sectors. The two leaders also welcomed the signing of a social security agreement and hailed it as an important step to facilitate movement of professionals and business persons between India and Brazil.

"Both leaders emphasized that World Trade Organization as a central element in supporting growth in developing countries. Recognizing the complementary nature of trade and investment, they also agreed that established bilateral mechanisms could be suitably utilized to stimulate greater cooperation," said the joint statement. The two sides also agreed to cooperate in the field of animal husbandry.