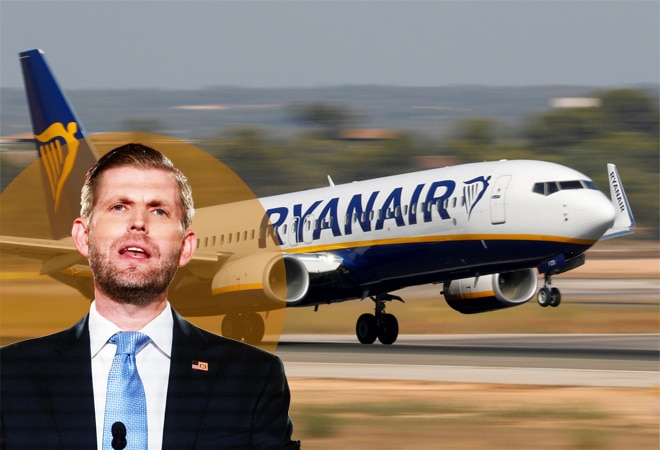 Budget airline Ryanair took a dig at President Donald Trump's son Eric Trump after he made an appearance in Pennsylvania with Rudy Giuliani. The airline mocked him and said that he might not have access to Air Force One anymore and hence could take low-budget commercial flights.

Ryanair tweeted a picture of an emotional Eric Trump and said, "The look of a man who might not have access to Air Force One in the future and will have to fly commercial. Don't worry Eric, we have 9.99 euro fares next time you're in Europe."

don't worry Eric, we have €9.99 fares next time you're in Europe#Election2020pic.twitter.com/4acb5ZiJt4

Pennsylvania is one of the remaining states where Trump was leading as on Thursday and would like to keep it that way. "This is absolute fraud, we've seen it in Philadelphia before, they're trying to make a mockery of the election of this country," said Eric Trump during his appearance.

But social media is a double-edged sword, as Ryanair soon found out. Twitterati lashed back on the airline and said that getting a simple refund from the airline is such a task and criticised it for vocally supporting one candidate over another.

"The look of a man that just spent half an hour on the phone trying to speak to your Customer Service and got told they picked the wrong option and will need to speak to another member of the team to sort out the refund they've been waiting for months," said a user, while another added, "He will have to make sure he has more money to book another flight because he could wait 6 months to get a refund - impossible time get a response to DMs etc."

"The look of an online refund request form that is designed specifically not to allow refunds - it is permanently blocked. Some customers try to do things properly and follow procedures, but Ryanair you don't seem to care," criticised yet another customer. Soon a barrage of complaints poured in on Ryanair's timeline, with a lot of people complaining about their customer service and many asking for their pending refunds.

Meanwhile, Democrat Joe Biden is swiftly closing in in Pennsylvania and has narrowed the gap to around 26,000 votes. Losing Pennsylvania would be tantamount to a death blow to Trump's campaign. So far, according to The Associated Press, Biden has secured 264 of the 270 electoral votes, while Trump is trailing at 214.

Delhi's AQI in 'severe category', worst of the season

COVID-19 pandemic does what demonetisation couldn't!