Sushma Swaraj death: Sushma Swaraj's mortal remains will be kept at BJP headquarters from 12 pm to 3 pm. Her last rites will be performed at Lodhi crematorium 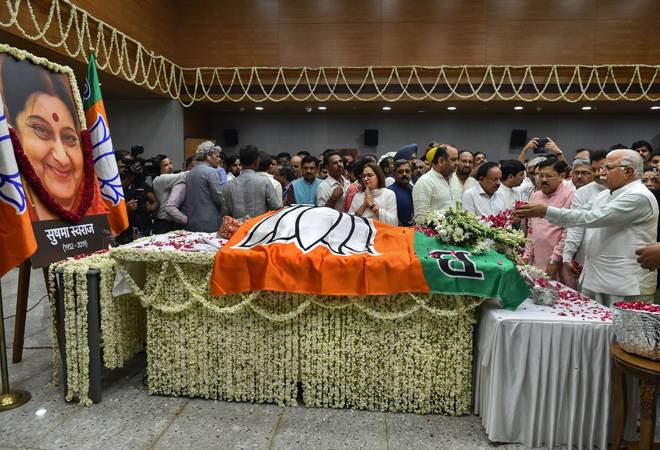 Swaraj died late on Tuesday night at the All India Institute of Medical Sciences (AIIMS) after suffering a cardiac attack, doctors said. She was 67.

Swaraj was taken to the AIIMS at around 9:30 pm yesterday in a critical condition and was straight away taken to the emergency ward where a team of doctors attended to her but could not revive her.

BJP leaders on Tuesday condoled the death of former Union minister Sushma Swaraj, with party president Amit Shah saying that she left an indelible mark in the national politics.

She started her political life with the Akhil Bharatiya Vidyarthi Parishad (ABVP), the RSS' student wing, and later joined the BJP.

She was the Information and Broadcasting Minister in the 13-day Atal Bihari Vajpayee government in 1996 and got the Cabinet portfolio again after he led the BJP to power in 1998.

Swaraj was external affairs minister from 2014 to 2019, leader of the Opposition in the Lok Sabha from 2009 to 2014, minister for information and broadcasting in Vajpayee government from 2000-2003. She served as Chief Minister of Delhi in 1998.