The government had budgeted for a gross tax collection of Rs 24.6 lakh crore for the current financial year against the revised estimate of Rs 22.5 lakh crore for 2018-19, an estimated 9.5 per cent growth in 2019-20 The Centre's gross tax revenue collection is facing a shortfall of over Rs 2 lakh crore and the government seems to have communicated to the Finance Commission, an autonomous body that defines the terms and oversees the distribution of tax proceeds between the states and the centre.

The government had budgeted for a gross tax collection of Rs 24.6 lakh crore for the current financial year against the revised estimate of Rs 22.5 lakh crore for 2018-19, an estimated 9.5 per cent growth in 2019-20. However, the provisional collection in 2018-19 was around Rs 21 lakh crore. It means the tax collection this year have to grow at 18 per cent, a difficult task given the slowing economy and poor GST collections. 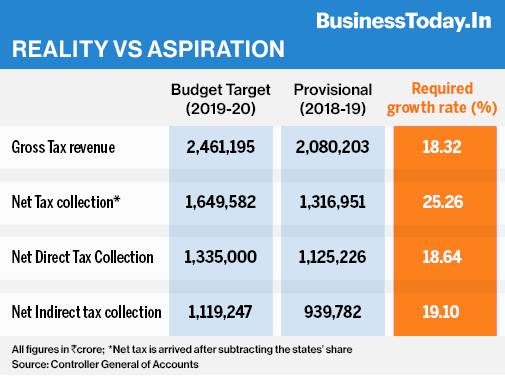 What makes the matter worse for the government is the fact that it had to take a dent of another Rs 1.45 lakh crore due to its recent announcement to cut corporate tax rate drastically from 30 per cent to 22 per cent. Even though some experts feel the likely impact (the revenue foregone of Rs 1.45 lakh crore) of the tax cut is overstated, it could yet be anywhere between Rs 1-1.25 lakh crore. 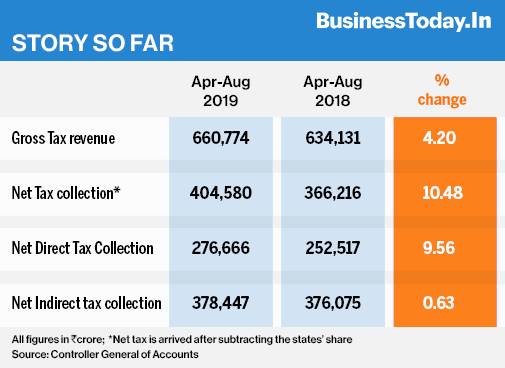 Around 2.45 lakh companies, which accounted for 69 per cent of the corporate tax, paid taxes at an effective rate of higher than 25 per cent in 2017-18. Companies that opt for 22 per cent basic corporate tax rates will have to pay an effective tax rate of 25.17 per cent after including the surcharge and cess.

According to a Kotak Economic Research report, after accounting for a reduction in corporate tax rates, weak GST and income tax collections in 2019-20, the net tax shortfall is likely to be around Rs 1.7 lakh crore.