TSSIA is meeting tomorrow to decide the future course of action, which includes a meeting of all Gramapanchayath heads and other authorities and the possibility of legal remedies: Ninad Jaywant 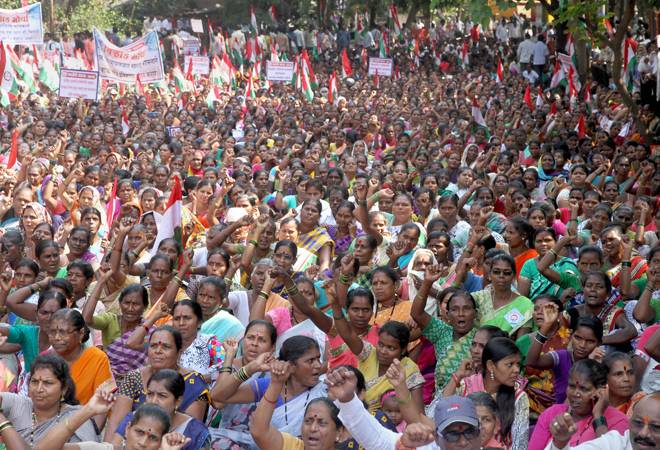 Thousands of industrial units, mainly warehouses of corporates and small-scale units spread over 14 crore square feet of industrial space spread across 62 villages in Bhiwandi, the textile and warehousing hub near Mumbai, are facing an imminent crisis. Over 20 lakh direct and indirect workers are employed in these units and are staring at job loss.

Sources told Business Today that the MMRDA (Mumbai Metropolitan Region Development Authority), Bhiwandi-Nizampur City Municipal Corporation and the state revenue department last week initiated demolition of illegal constructions in eight of these 62 villages, based on a verdict by the Bombay High Court in May and a survey conducted thereafter to demolish buildings and structures illegally constructed on agricultural farm lands. However, the authorities had to return as protesting residents and workers blocked the roads. Hundreds of protesting locals and workers yesterday marched to the District Collectorate. The local transporters union will observe a bandh tomorrow in Bhiwandi, as the authorities may seize goods transported out of the 'illegally' termed godowns, they said.

"The region supplies everything for Mumbai and Pune, as all the major e-commerce ventures such as Amazon and Flipkart to major corporates, pharmaceutical and FMCG companies have their warehouses in Bhiwandi. Out of the 14 crore square feet of constructed space in these villages, 75-80 per cent are warehouses and the remaining 20-25 per cent are manufacturing units in power looms, engineering, printing and packaging units," said Ninad Jaywant, Chairman, Bhiwandi Chapter of the Thane Small Scale Industries Association (TSSIA).

TSSIA is meeting tomorrow to decide the future course of action, which includes a meeting of all Gramapanchayath heads and other authorities and the possibility of legal remedies, he said.

Jaywant said most of these units were constructed about 20 years ago when numerous units in Mumbai were relocating to the outskirts. Companies like Raymonds have 2.5 lakh square feet and Godrej about 2 lakh square feet of warehousing space in the region. E-commerce companies such as Amazon has nearly 10 lakh square feet.

"At present, it is not clear how many of these units have been termed illegal as MMRDA has not issued individual notices and had just given a public notice sometime ago. Their stipulation is that anything will be illegal if it is an agricultural land and beyond two on floor space index (FSI), that is, if you have land of 10 acres, construction space will be limited to two acres. We are helpless in this as these constructions were done by obtaining all the then prevailing permissions from the Gramapanchayaths.  It is like purchasing a flat, wherein the flat belongs to the society and you own just the flat," he said.

In 2007, the MMRDA took over the region as part of developing an industrial belt upto Palghar and since 2012, the rules were made stringent. "Now to get a factory licence, one has to get Maharashtra Pollution Control Board (MPCB) clearance and from numerous other departments, from at least 25 including forest, highways and railways etc. It is practically impossible for small units. They are harassing us and deny the licence saying the constructions are illegal, in agricultural lands," says Jaywant.

Mohammed Bamboat, CEO and his father Huzaifa I Bamboat, Director of Bamboat Press, makes packaging material and labels  for many companies such as drug firm Wockhardt. They had invested over Rs 7 crore, importing latest machines from the US and UK. But, the MMRDA is reluctant to give a factory licence. "We had over 30 corporate clients but since they term us 'illegal', orders have stopped. We don't know how to go on from here," says  Bamboat.

G.Rajaram, owner of Dhanalakshmi Plastics, which makes plastic packaging material for industrial purpose, says his firm has also been termed 'illegal' as the company do not have a factory licence from MMRDA. The unit was closed for over seven months and just recently restarted after running from 'pillar to post'. Same is the story of Nitin Vora, another plastic manufacturer who makes plastic covers above 100 microns. "My business is not even 30 per cent of what it was earlier, and faces closure," says Vora. Satheesan of Expo Engineering, a 100 per cent exporter of nuts and bolts to petrochemical companies, is also in trouble because of the issue of factory license from MMRDA. "I am planning to shift to Daman," he says. Similarly, Dinesh Gajria, chairman and managing director of Print Plus, a Rs 50 crore-plus revenue earning stationary and printing unit for corporates,  is also facing the same issue. The unit employs about 800 people at any point of time.

Also Read: Ind-Ra revises India's GDP forecast, cuts it down to 5.6% for FY20