FM Sitharaman answers questions on the Union Budget 2019 and decode the plans for Indian economy mentioned therein at the Budget Roundtable. 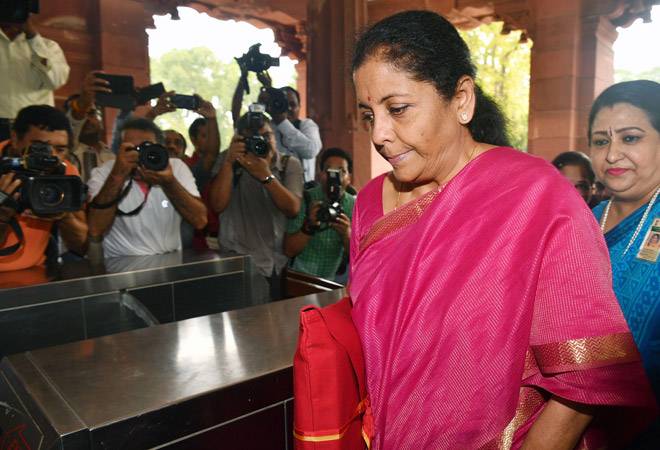 Interacting with prominent economists and the who's who of the Indian corporate world at the Budget Roundtable, Finance Minister Nirmala Sitharaman stated that the government stands with India Inc. India is still the fastest growing country and it is because of you, the Finance Minister said while addressing the representatives from various sectors.

In response to a question by India Today's Rahul Kanwal, FM Sitharaman said that the government trusts India Inc and has taken measures to ensure that this trust is reciprocated.

Finance Minister Nirmala Sitharaman presented her first Union Budget before the Parliament on Friday last week. Three days after delivering her first Budget speech, the Finance Minister met the representatives from the Indian corporate sector and economists for the Budget Roundtable.

During the Budget Roundtable, FM Sitharaman answered questions on the Union Budget 2019 and decoded the plans for Indian economy mentioned therein. She was joined by veteran banker Uday Kotak and Sanjiv Goenka, chairman of RP-Sanjiv Goenka Group, economist Ila Patnaik, CII Director General Chandrajit Banerjee, along with others.

Follow the updates from the Budget Roundtable on BusinessToday.In:

9:05 pm: "We are making sure that those who cannot afford it, government stands by them. Ayushman Bharat comes from the point that preventive and curative healthcare should be available for the poorest of the poor," FM Sitharaman said on healthcare. She also invited suggestions from the healthcare industry to boost investment.

9:02 pm: "I think never before the Prime Minister has taken a look at the efficiency of schemes using technology. This has actually saved money" Ajit Ranade, Chief Economist, Aditya Birla Group,

9:01 pm: The targets in the Budget, including the disinvestment target, are not unachievable, FM Sitharaman said.

9:00 pm: On the question of how does being India's Finance Minister compare to being India's Defence Minister, FM Sitharaman replied in a lighter tone, "I'm sure none of you are going to like this answer, but dealing with armed forces is simpler. And they are thorough-going gentlemen."

On a more serious note, Sitharaman said,"This (being Finance Minister) is a lot more challenging."

8:51 pm: In response to a question by Chandrajit Banerjee, Director General, CII, about bringing the states on board for pushing reforms, FM Sitharaman said that the engagement should not stop with the Government of India. "Institutions like CII cannot now any longer satisfy themselves by dealing with union ministers, or even at the level of chief ministers in the state. There has to be more engagement with institutions within every state," she said.

8:43 pm: 'We might to, for some more time, bear with a not-so-equitable tax structure. That's not to say I'll rip-off the rich. Look at the benefits which have been given back also. And that not just for the poor or the rich, that is for everyone," the FM said.

"I invite you to stay back here to do business and say, all right we've done enough, tell me when are you going to reduce rates," she further added.

8:36 pm: "You have taken a step towards changing the cap for corporate tax. Should we expect that this is the direction this directional Budget will go?," asks economist Ila Patnaik. In her reply, FM Sitharaman said that this would be done at the earliest. "Other south-east Asian nations with whom we compete are coming down from 25 per cent to touch 20 per cent (in corprate tax). We certainly do not want to go where we are already reasonably treated... and trample," she said.

8:28 pm: On favouring the bahi-khaata over the conventional brown briefcase, FM Sitharaman said that it was not planned. To this day, I cannot pronounce that word (bahi-khaata), the FM said. "It changed because I didn't want the briefcase. Briefcase brought a very negative connotation for me. I said this government will never get into the briefcase-suitcase business. And second, of course, I wanted to get over this colonial hangup," the FM said.

8:26 pm: "We placed a lot of emphasis to understand what should on the developmental financing," says the FM.

8:22 pm: "I look forward to a very positive engagement with the Reserve Bank. I think we have today in the Reserve Bank a very understanding and also we want to exchange a lot of thoughts with them. There will definitely be a certain positive energy between the two institutions (the RBI & the government)," says FM Sitharaman

8:18 pm: Indian industry, if it gets significant improvement in interest rates, that will certainly help animal spirits, said Uday Kotak.

8:12 pm: My fiscal discipline is something that I will have to follow. But that does not mean that I have watered down my commitment to infrastructure growth, says FM Sitharaman.

8:11 pm: I have set the direction, touched the areas that needed immediate attention (in the Union Budget 2019), says FM Sitharaman.

8:09 pm: FM Nirmala Sitharaman acknowledged the role India Inc has played in the growth of the Indian economy and showed enthusiasm towards sugestions from the Indian corporate sector. She stated that the government trusts India Inc and steps have been taken to ensure that the India Inc trusts the government.

"India still is the fastest growing country, and it is becasue of you," says the Finance Minister.

8:03 pm: The Union Budget 2019 was centred on making India a $5 trillion economy and talked of measures to achieve this goal.

7:45 pm: The stage is set. Finance Minister Nirmala Sitharaman will soon meet who's who of India Inc and economists to decode the Union Budget 2019.