Asserting that the People's Liberation Army's activities in the region are "destabilising", he said that it "continues its aggressive behaviour in the East and South China Seas." 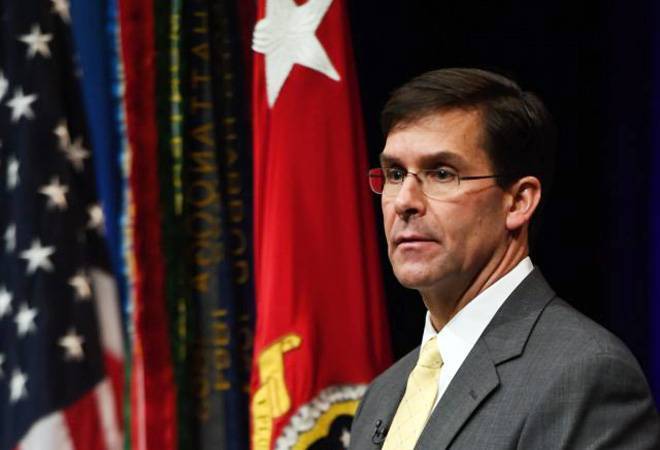 US Secretary of Defence Mark Esper

Describing the Chinese military''s aggressive activities in the region as "destabilising", US Secretary of Defence Mark Esper on Tuesday said America was "very closely" monitoring the situation between India and China along the Line of Actual Control.

Esper also highlighted the "increased" military cooperation with India and called it as "one of the most important defence relationships of the 21th century." He made the remarks during his interaction with London-based think-tank International Institute for Strategic Studies amid China's renewed military assertiveness in eastern Ladakh as well as in the South China Sea.

"We are obviously monitoring the situation between India and China very closely, what's happening along the Line of Actual Control and we are very pleased to see both sides are trying to de-escalate the situation," Esper said in response to a question on the tension between the two neighbours.

Asserting that the People's Liberation Army's activities in the region are "destabilising", he said that it "continues its aggressive behaviour in the East and South China Seas." In the midst of India''s border row with China, a US Navy carrier strike group led by nuclear-powered aircraft carrier USS Nimitz carried out a military drill with a fleet of Indian warships off the coast of Andaman and Nicobar Islands on Monday.

"I want to highlight our increased defence cooperation with India, one of the most important defence relationships of the 21th century. We conducted our first-ever joint military exercise last November. As we speak today, USS Nimitz is conducting a combined exercise with Indian Navy in the Indian Ocean, demonstrating our shared commitment to stronger naval cooperation and support to a free and open Indo-Pacific," he said.

"We firmly believe no single nation can - or should - dominate the public commons, and we will continue to work alongside our allies and partners to support a prosperous and secure Indo-Pacific for all," he said. "We also continue to grow our defence sales and look forward to a robust 2+2 ministerial dialogue later this year to build on this progress," he said on US-India defence cooperation.

Under promoting a more networked region, Esper said that the US is encouraging Indo-Pacific nations to expand their own interregional security relationships and networks of like minded partners.

For example, over the past several years, Japan has provided maritime vessels to the Philippines, Vietnam, Malaysia and Bangladesh bolstering their maritime security. "In June, Australia and India finalised an important logistical support in agreement," he said. "Our carriers have been in the South China Sea and Indo-Pacific since World War II. We will back the sovereignty of our friends and partners," he added.

Esper said that to support its Indo-Pacific strategy, the Trump Administration looks forward to working with the Congress to establish a Pacific Deterrence Initiative that will prioritise its investments, maintain a credible deterrent and demonstrate and enduring whole of government commitment to the region.

"The US efforts across the Indo-Pacific and prepared it well to respond to the prevailing crisis: the COVID-19 pandemic. The US government has committed more than USD 325 million in coronavirus released support for its Indo Pacific partners," he said. When asked, how much is the US worried about nuclear and crisis stability between India and Pakistan, Esper said that obviously, when there are two countries with nuclear capabilities and tension between them, it''s something the US watches very closely.

"I also talk to my Indian and Pakistani counterparts fairly routinely. This is just something that you got to keep a close watch on because nobody wants to see a conflict between two countries. And certainly not one that could escalate. I don''t see any indications right now that that''s happening at all. But, it is something that we watch, not just in that part of the world, but in other parts of the world," he said.

Esper said China's unlawful land reclamation and military exercises on and around disputed features in the South China Sea are patently inconsistent with its commitments set out in the 2002 Declaration on the Conduct of Parties in the region. "The Chinese Communist Party continues to engage in systemic rule-breaking, coercion and other malign activities," he said.

China is engaged in hotly contested territorial disputes in both the South China Sea and the East China Sea. Beijing has built up and militarised many of the islands and reefs it controls in the region. Esper asked the Chinese leaders to abide by the international laws and norms that China - and the Chinese people - have benefited greatly from over the years. "And while we hope the CCP will change its ways, we must be prepared for the alternative," he cautioned.

Relations between the US and China have taken a turn for the worse in recent months over Beijing's handling of the coronavirus pandemic. Fresh concerns over China''s crackdown of its Uygur Muslim community in Xinjiang and Beijing imposing a controversial national security law in Hong Kong have also raised tensions.