Speaking at World Economic Forum (WEF) India Summit, Hasina said that Bangladesh has the most liberal investment policy in South Asia, and it includes protection of foreign investment by law; generous tax holiday; concessionary duty on import of machinery and unrestricted exit policy 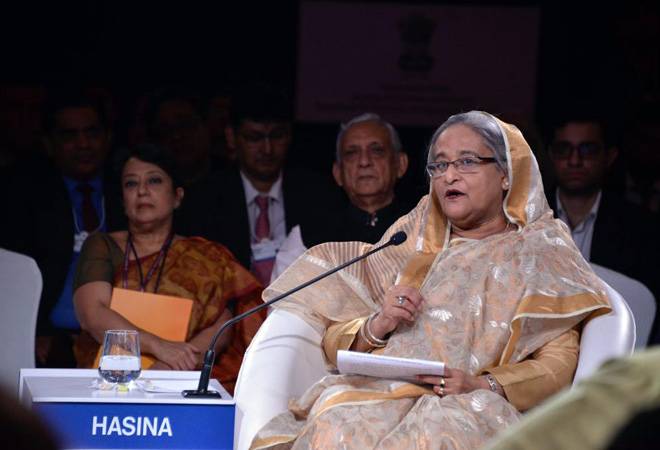 Bangladesh Prime Minister Sheikh Hasina on Friday said that the strategic location of Bangladesh provides tremendous potential for becoming the economic hub of the region. With India on the west, China on the north and Southeast Asia on the east, Bangladesh is geographically positioned to create a bridge between Asian countries, said Hasina while addressing India-Bangladesh Business Forum, which was organised by industry chambers, including CII and Assocham.

"Bangladesh can be a hub for connectivity," said Sheikh Hasina, who is on her first visit to India after she became the prime minister for the third consecutive term after landslide victory in December last year.

"The balance of trade, however, is still largely in India's favour. The volume of trade between two countries is nearly USD 10 billion. In 2018, Bangladesh was India's eighth largest export destination with USD 8.8 billion export and our export to India also crossed USD 1 billion mark for the first time last year. So, the progress is visible, but there is lot of scope for further deepening our relations in the area of trade and investment," she said.

"The fundamental way in moving ahead is to celebrate our region's diversity, ethnicity and language. We need to hold hands across South Asia to build mutual trust and respect," she added.

Speaking at World Economic Forum (WEF) India Summit, Hasina also spoke about how Bangladesh was providing refuge to over a million people from neighbouring Myanmar. "We have 1.1 million refugees from Myanmar. We are discussing this issue with them."

"The main concern of our region is poverty and we all need to work together to eradicate it. We need to build confidence among people that we all can fight it together."

On Bangladesh foreign policy, she said that the country maintains a policy of "friendship to all, malice to none".

Commenting on Indian government's decision to stop onion exports, the Bangladeshi prime minister said that the move has led to a bit of difficulty for her countrymen. Last Sunday, India banned exports of onion to increase the availability of the commodity in the domestic market and contain spiralling prices.

Pitching for boosting trade and investments between the two countries, she said huge potential exists in Bangladesh for the Indian business community in different sectors. She said that Bangladesh has the most liberal investment policy in South Asia, and it includes protection of foreign investment by law; generous tax holiday; concessionary duty on import of machinery; unrestricted exit policy; full repatriation of dividend and capital on exit, to name a few.

"We also want to see trade and investment together where Indian big investors can set up industries in Bangladesh and export the products to the north-eastern states of India and South-east Asian countries taking advantage of the improved connectivity between us," Hasina said.