Gold price hike: The uncertainty on the US-China tariff war front, volatile oil market, murmurs of a recession, weak rupee and foreign funds outflow from India have all fuelled demand for this safe haven asset. 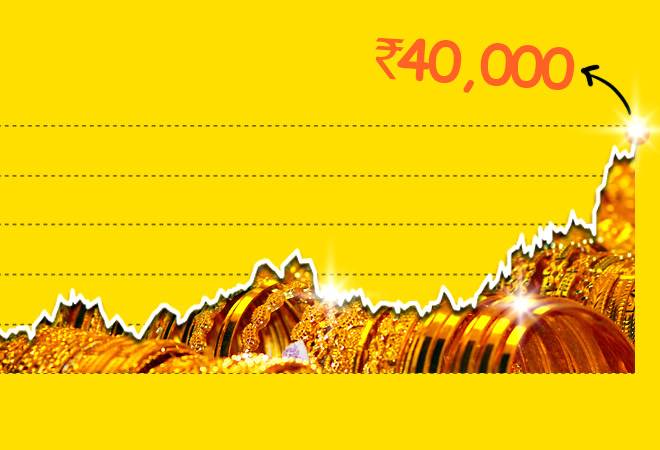 According to experts, gold's next bull cycle is underway and spot gold prices may even shoot past the $1,950 per ounce level from the current $1,528.10 mark

Gold prices hit a new six-year high of over Rs 40,000 per 10 gm on Monday, and the pundits predict that the yellow metal could soar to Rs 40,000-41,000 in the near future. The uncertainty on the US-China tariff war front, volatile oil market, the bleak global market scenario and murmurs of a recession have all fuelled demand for this safe haven asset. After all, gold is a financial instrument which will not lose its value in a crisis, and hence the metal's prices tend to shoot up in turbulent times.

According to Kotak Commodities head Ravindra Rao, gold's next bull cycle is underway and spot gold prices may even shoot past the $1,950 per ounce level from the current $1,528.10 mark. "Gold prices are indicating that the global worries are still intact. This worry has started since last 2-3 years, now that is escalating. If we compare gold with S&P and gold with bond yield, still the ratio is very low, so gold has a lot of steam left to go much higher," Rao told IANS.

Gold, in fact, is proving to be the best bet in 2019 when compared to other investment avenues, beating returns derived from mutual funds, equities, real-estate and fixed deposits. Here are five reasons why gold is suddenly so expensive:

The mixed signals being sent out by the US on the tariff war only fans investor concerns, making gold all the more in demand. The tit-for-tat battle between the world's two biggest economies took a dramatic turn for the worse last week when with US President Trump announced an additional duty on some $550 billion of targeted Chinese goods, hours after China unveiled retaliatory tariffs on $75 billion worth of US goods. Then on Monday, he flagged the possibility of a trade deal with China, adding that he believed Beijing was sincere in its desire to reach an agreement. "Great respect for the fact that President Xi & his Representatives want "calm resolution." So impressed that they are willing to come out & state the facts so accurately," he tweeted, adding that "talks are continuing".

In a similar vein, Chinese Vice Premier Liu He, who has been leading the talks with Washington, said on August 26 that China opposed any escalation in trade tensions. This sign of a thaw - along with Trump's decision to delay imposing a 10% import tariff on select Chinese products - prompted gold prices to retreat somewhat from Monday's peak.

However, just last week, US Vice President Mike Pence had urged China to respect the integrity of Hong Kong's laws and warned that it would be harder for Washington to make a trade deal with Beijing if there was violence in the former British territory. More recently, on August 25, the White House said that Trump regretted not raising the tariffs on China even more. Courtesy this yo-yoing stance, experts say gold is likely to stay overvalued in the short term at least.

Furthermore, the weakness in the Chinese yuan signals that the trade wars are far from over since the country has used devaluation as a policy tool to offset the impact of the tariffs. The People's Bank of China has let its currency weaken beyond the psychologically important point of 7 renminbi to a dollar for the first time in over a decade.

Global economic outlook is weak for the year 2019 as the world is expected to grow at 3.2 per cent in 2019 and 3.5 per cent in 2020 as per July's World Economic outlook report (WEO). Since April WEO projections, both these numbers have been downward revised by 0.1 per cent. Moreover, nine major economies around the world, including the UK, Germany, Russia, Singapore and Brazil, are on the brink of recession or already there. And speculation is rife that the US is likely to follow soon. In the bargain, demand for safe haven gold goes up further.

The economic slowdown at home is a key factor, too. Credit rating agency CRISIL has lowered gross domestic product (GDP) growth forecast for India by 20 basis points to 6.9 per cent for this fiscal, citing weak monsoon and slowing global growth. Sluggish GDP data for the first quarter was also taken into account for lowering India's growth estimates. The International Monetary Fund (IMF), on the other hand, cut India's growth by 30 basis points for the calendar years 2019 and 2020 to 7 per cent and 7.2 per cent, respectively.

Asian markets have not performed as per the expectations of investors. The major exchanges bled across Asia as investors looked for safer investment avenues. Asian markets fell more than 1.6 per cent on Monday, and Hong Kong's Hang Seng closed 2.9 per cent lower. At home, the BSE and NSE tumbled by 1.13 per cent and 1.23 per cent respectively. Asian markets were in a turmoil following the Wall Street's reaction to the trade tensions.

The rupee on Monday closed below the 72 level against the US currency for the first time in nine months, hit by a 'flash crash' in global currencies due to uncertainty over the trade front. The domestic currency opened at 72.03 and later fell to 72.08 against the US dollar, showing a decline of 42 paise over its previous closing.

Although it managed to gain in early trading on Tuesday - appreciating by 32 paise to 71.70 against the greenback - amid revival of US-China trade talk hopes and gains in domestic equity market, the short-term outlook is not optimistic with rising crude oil prices and foreign fund outflows weighing on the currency. The weaker rupee has also contributed to the rise in the yellow prices as it made imports costlier.

"In the second half of the year, what we are looking for is some sort of positive news on the US-China trade war and maybe a little bit more [rupee] gains if the sovereign bonds issuance comes through," Sakshi Gupta, senior Treasury economist at HDFC Bank, told Reuters.

Foreign investors turned net sellers in the month of July 2019, pulling out close to Rs 11,000 crore from the Indian equities market and over Rs 9,000 crore on a net basis in the first half of August. This further hurt the rupee. The higher tax imposed on super rich as well as the income tax outgo for Foreign Portfolio Investors (FPIs) in Budget 2019 was a strong contributor leading to FII's selling spree. Although Finance Minister Nirmala Sitharaman revoked this decision on Friday, FIIs remained net seller by Rs 752.90 crore on Monday.

IRCTC's Tejas Express fares to be 50% less than flights on same routes; no concession, quota for VIPs