Corporates accounted for about 1.6 per cent of total taxpayers, as per the tax returns for assessment year 2017/18 but they contributed over 55 per cent to income taxes during the same year A fiscal stimulus of Rs 1.45 lakh crore in the form of tax exemptions has finally brought cheers to both corporate and the stock market, as the government on Friday cut corporate tax rates for domestic companies that do not avail of any tax incentive to 22 per cent from the existing 30 per cent. Effective corporate tax rate after surcharge will amount to 25.17 per cent. For new manufacturing companies, the existing tax rate of 25 per cent has been brought down to 15 per cent.

Corporates accounted for about 1.6 per cent of total taxpayers, as per the tax returns for assessment year 2017/18 but they contributed over 55 per cent to income taxes during the same year. "It is a bold move by the government, considering the fact that there has been a dip in GST collections. This could be a good move to break the catch-22 situation and the improvement in business is likely to increase tax collections," says Aakash Uppal, Partner/ Tax & Regulatory Services, BDO India.

Data showed only 20 Nifty companies in 2018/19 paid more than 30 per cent effective tax rate and accounted for 43 per cent of overall net profits. The effective tax rate of Nifty companies on an aggregate basis stood at 26 per cent, which will now come down to 25.17 per cent, according to a report by Kotak Securities. "Any company paying 33 per cent tax rate will see its earning go up by 12 per cent. Overall, we can see Nifty earnings going up by nearly 5-6 per cent in FY20 as the effective tax rate was already lower at 26 per cent. Add the sentiment booster angle and the way this will be taken positively by FIIs and local investors, we can expect the Nifty to rally by 9-10 per cent from today's low of nearly 10,700. Hence, 11,500-11,600 is very much possible on the Nifty without considering any other factor," said Rusmik Oza, Head of Fundamental Research, Kotak Securities.

The corporate income tax has undergone significant changes over the past few years. The distinction between closely held and widely held companies was done away with and tax rates were unified at 40 per cent in 1993/94. The corporate tax rate was brought down to 35 per cent in 1997/98 and the levy of tax on dividends in the hands of shareholders was eliminated. However, a new dividend distribution tax was introduced and levied on firms. 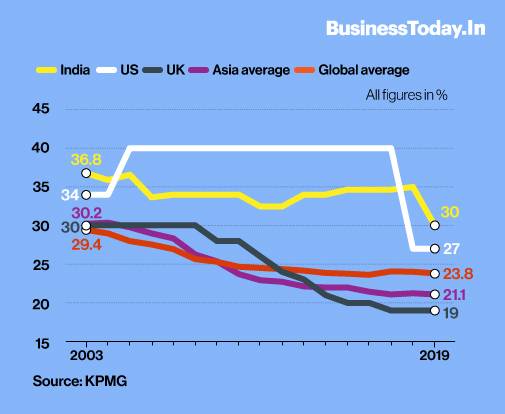 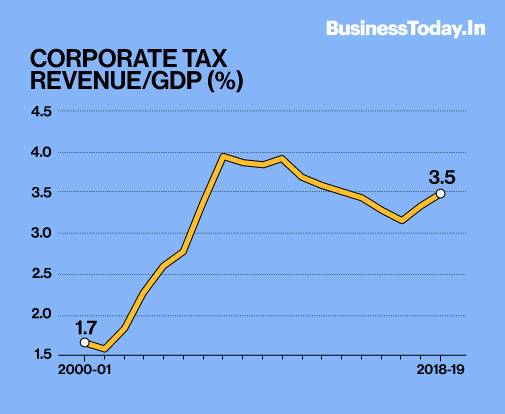