Subramanian explains how after the NBFC crisis, banks turned cautious and stopped lending to small businesses, leading to a major fall in credit flow from Rs 20-lakh crore in FY19 to 'virtually nothing' in current fiscal 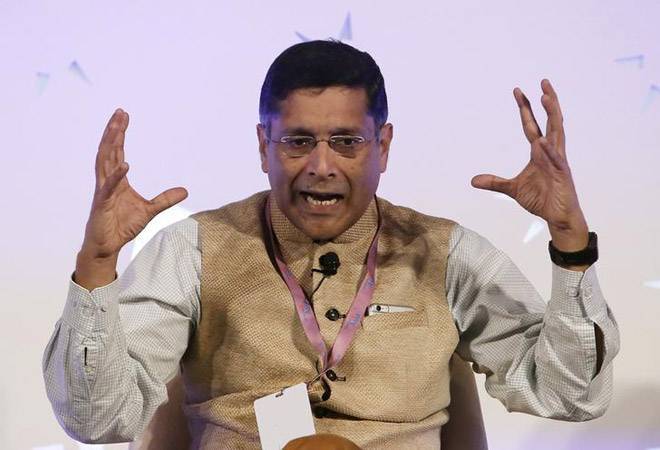 Subramanian says the Rs 90,000-crore IL&FS crisis in 2018 was a "seismic event" as it led to a reassessment of the entire NBFC sector

Former Chief Economic Adviser Arvind Subramanian has said the Indian economy was headed towards an "intensive care unit" and that a "Great Slowdown" was imminent. The former chief economic adviser said the country was experiencing what he calls the "second wave" of Twin Balance Sheet (TBS) crisis, which will further lead to an even bigger damage to the economy.

"Look at electricity generation growth, it's falling off the bottom, and it's never been like this ever. So this is the sense in which I would say this is not just any slowdown, this is the great slowdown that India is experiencing and we should look at it with all seriousness ...and the economy seems headed for the intensive care unit," Arvind Subramanian said during a discussion on his draft working paper published at the Harvard University's Centre for International Development said.

Subramanian has co-authored the paper with the former head of the International Monetary Fund's India office, Josh Felman. In this paper, Subramanian and Felman have termed India's current economic crisis as "TBS-2" crisis.

Subramanian, who currently teaches at Harvard Kennedy School, had highlighted the TBS problem for the first time -- the issue of private companies turning into NPAs (non-performing assets) -- way back in December 2014 when he was the CEA under the previous Modi government.

While in TBS-1, loans were offered to big corporates in steel, power and infrastructure sectors, which later turned into NPAs, TBS-2 emerged after demonetisation, maintains the paper.

Subramanian says the Rs 90,000 crore IL&FS crisis in 2018 was a "seismic event" as it led to a reassessment of the entire NBFC sector.

Equating India's real estate crisis with the United States' housing bubble, Subramanian's paper says after the IL&FS crisis, it came to the fore that the real estate sector got a major chunk of loans from NBFCs, which resulted in a huge unsold inventory of over 10 lakh houses, valued at over Rs 8 lakh crore, across top 8 cities of India alone. "In some ways, this may have been India's version of the US housing bubble," he argued.

The paper explains how after the NBFC (non-banking finance companies) crisis, banks turned cautious and stopped lending to small businesses, leading to a major fall in credit flow from Rs 20-lakh crore in FY19 to "virtually nothing" in the current fiscal.

The unaddressed TBS problem, coupled with latest TBS-2 crisis, has now pushed the economy further down, elaborates the paper.

"What I find is quite unusual. We look at three-four major engines of growth from a macro-economics side -- consumption, investment, trade and government. All these numbers are either in negative growth territory or things are in barely positive territory. This tells you something serious is going on. We asked ourselves: does this resembles the NDA-1 slowdown of 2000-2002? But all that does not resembles the NDA period ...slowdown seems closer to the 1991 balance of payments crisis," Subramanian said.

In July this year, Subramanian, in his research paper published at Harvard University, said India's GDP growth estimate had been exaggerated by around 2.5 percentage points between 2011-12 and 2016-17, a period that spans both UPA and NDA governments. He pegged the actual GDP growth at around 4.5 per cent, as against the official estimates of nearly 7 per cent growth during the said period.