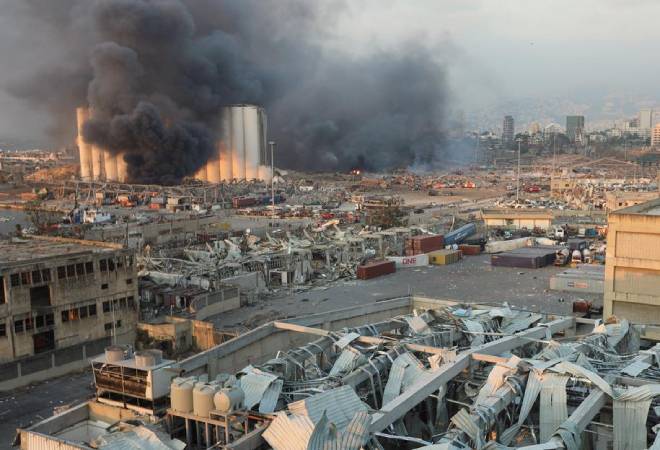 A massive explosion in the port warehouse district of Beirut, the capital city of Lebanon, sent shockwaves across the city. The explosion was so strong that cars driving in the vicinity were damaged, whereas doors and balconies collapsed in homes, offices and religious places.

The explosion in Beirut's port area claimed 25 lives, while more than 2,500 people were injured, informed Lebanon's health minister. The number of casualties is expected to rise as emergency workers dig through the debris to rescue trapped people and remove the dead. The Beirut port sustained severe damages.

Lebanon's interior minister said initial information indicated highly explosive material, seized years ago, that had been stored at the port had blown up. The minister later told Al Jadeed TV ammonium nitrate had been in storage there since 2014.

"What we are witnessing is a huge catastrophe," the head of Lebanon's Red Cross George Kettani told broadcaster Mayadeen. "There are victims and casualties everywhere - in all the streets and areas near and far from the explosion."

Three hours after the blast, which struck shortly after 6 pm local time, a fire still blazed in the port district, reported Reuters, casting an orange glow across the night sky as helicopters hovered and ambulance sirens sounded across the capital.

A security source told the news agency that victims were being taken for treatment outside the city because Beirut hospitals were already packed with wounded. Red Cross ambulances from the north and south of the country and the Bekaa valley to the east were called in to cope with the huge casualty toll.

However, it was not immediately clear as to what caused the explosion.

Notably, this explosion happened three days before an UN-backed court is due to deliver a verdict in the trial of four suspects from the Shi'ite group Hezbollah over a 2005 bombing which killed former Prime Minister Rafik al-Hariri and 21 others. The blast that killed Harari also occurred close to the waterfront, caused by a truck bomb.

Videos shared on social media shows a column of smoke rising from the port warehouse district. A few sparks at the base of the smoke column were followed by a huge explosion that sent a ball of white smoke and fire across the city. People as far as 2 km from the site of the explosion were physically thrown back from the shockwaves that swept through the city, Reuters reported. The seismic waves were so prominent that residents initially thought it was an earthquake. The port area was severely damaged.

"I saw a fireball and smoke billowing over Beirut. People were screaming and running, bleeding. Balconies were blown off buildings. Glass in high-rise buildings shattered and fell to the street," a witness told Reuters.

Residents said glass was broken in houses from Raouche, on Beirut's western tip, to Rabieh 10 km east. In Cyprus, a Mediterranean island 180 km across the sea from Beirut, residents heard the blast bangs. One resident in Nicosia said his house and window shutters shook. Parents clutched their wards and rushed to safety as the city was swept by shockwaves.

2020 just keeps getting worse. This looks like something you would see at the end of a movie. Let's keep everyone over in #Beirut in our thoughts. 💔 pic.twitter.com/tr0esag1mk

#BREAKING - INSANE CCTV footage from an office in #Beirut, #Lebanon during the MASSIVE explosion. pic.twitter.com/yVpUppaawH

The port of #Beirut has been completely destroyed in today’s massive explosion. This is #Lebanon’s main economic lifeline.

The economic crisis in our country - already worsened by US sanctions - is about to get much worse. pic.twitter.com/vxycOYVrCm

So many lives injured and killed by this massive multiple explosions in #Beirut Thoughts and prayers are for the loved one... pic.twitter.com/L4Nx0WO212

This video of a father in #Beirut trying to comfort and protect his son from the blast moved me to tears. pic.twitter.com/BTkls3MSxI