Doland Trump's comments came as he and Modi have agreed to meet on the sidelines of the G20 Summit in Osaka, Japan, on June 28-29 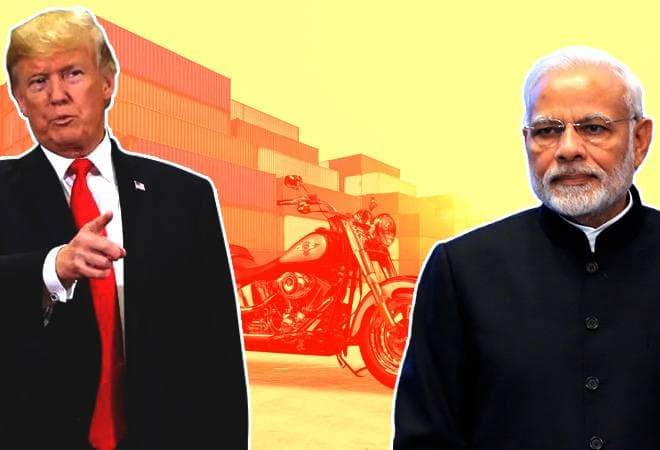 Trump, who looks at every bilateral relationship from the prism of economy, has called India a 'tariff king'.

Ahead of his meeting with Prime Minister Narendra Modi, US President Donald Trump has again criticised India's high import tariff on the iconic Harley Davidson motorcycles as "unacceptable", though he acknowledged that his "good friend" slashed the duty by half from 100 per cent. Trump's comments came as he and Modi have agreed to meet on the sidelines of the G20 Summit in Osaka, Japan on June 28-29.

Trump, who looks at every bilateral relationship from the prism of economy, has called India a "tariff king" and threatened to impose reciprocal tariffs on Indian products. Trump, in an interview to CBS News on Monday, said the United States, under his leadership, is a country that can no longer be fooled. "We're not the foolish country that does so badly. You look at India, very good friend of mine, Prime Minister (Narendra) Modi, you take a look at what they've done, 100 per cent tax on a motorcycle. We charge them nothing," Trump said.

Trump was referring to the import tariff on the Harley Davidson motorcycles, an issue that has been close to his heart and wants India to reduce the duty to zero. "So, when Harley sends over there, they have 100 per cent tax. When they (India) send in they make a tremendous number of motorcycles when they send them in, no tax. I called him. I said it's unacceptable," Trump said, referring to his conversation with Prime Minister Modi.

"He (Modi) reduced it by 50 per cent with one phone call. I said it's still unacceptable because it's 50 per cent versus nothing. It's still unacceptable. And they're working on it," he said, indicating that the two countries are still in talks to resolve the issue of import tariffs on American motorcycles. India had last February slashed the customs duty on imported motorcycles like Harley-Davidson to 50 per cent after Trump called it "unfair" and threatened to increase the tariff on import of Indian bikes to the US.

The US President has repeatedly claimed that India imposes "tremendously high" tariffs on American products. "But if I didn't, if we didn't have the power of what we have, and if we weren't the bank -- well, if we weren't the bank we wouldn't even be talking about it because nobody would care. "But we're the bank that everybody wants to rob, and that's what they've been doing for a long period of time. USD 800 billion we have in trade deficits with other countries. So you tell me who made those deals, he said in response to a question.

Trump's comments also came as the US media on Friday reported that India could soon become the next target of President Trump's aggressive policy, including launching the so-called Section 301 investigation against India. Under Section 301 of the Trade Act of 1974, the administration can take action, including tariffs, to counter another nation's policies that restrict US commerce.

Trump has invoked that previously little-used provision to impose or threaten tariffs on virtually all goods imported from China, Politico reported. "What happened with China is a road map for what you could see in India," the report quoted one business source close to the issue as saying.  "There's concern that recent restrictions adopted by the Indian government on e-commerce and data localisation have negatively impacted US companies and the overall investment climate," a senior White House official told PTI on condition of anonymity.

"The United States is hopeful that, with the election over, Prime Minister Modi will have a freer hand to pursue some of the tough economic reforms that will help create a more business-friendly environment and encourage new foreign investment," the official said recently. Immediately after Modi was sworn in for second term, President Trump informed the US Congress of his decision to terminated India's designation as a beneficiary developing nation under the key GSP trade programme after determining that it has not assured the US that it will provide "equitable and reasonable access to its markets."

The Generalised System of Preference (GSP) is the largest and oldest US trade preference programme and is designed to promote economic development by allowing duty-free entry for thousands of products from designated beneficiary countries.

No change in Pakistan's defence budget amid govt's austerity drive

After row, Karnataka CM says state to reconsider decision on sale of land to JSW Steel