Kamala Harris' ode to her mother, mention of 'chithis' fill Indians with pride

Senator Kamala Harris also spoke at length about her mother Shyamala Gopalan who raised her on her own in the US. Harris said that her mother worked around the clock to make it work for her and her sister Maya 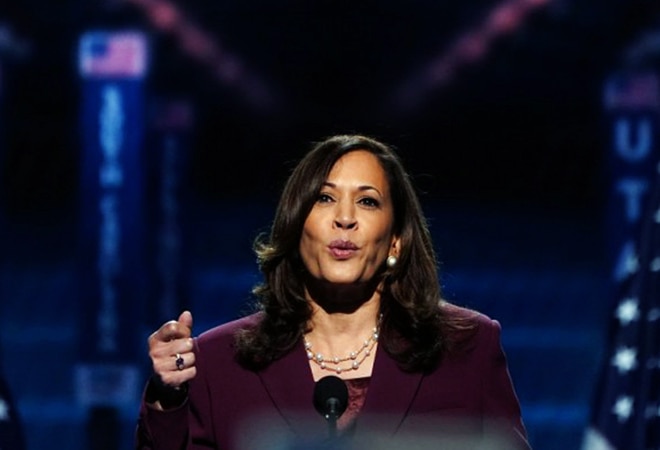 US Senator Kamala Harris' who became the first Black and Indian American woman to receive a major party's presidential ticket addressed the Democratic National Convention in Milwaukee on Wednesday. The Senator spoke about her Indian American heritage, her mother, the Black Lives Matter movement, structural racism, impact of the pandemic and her vision for how the US' President should be. In her powerful speech of 17 minutes, what stood out for the desis was her shout-out to her 'chithis' or aunts. Desi Twitter erupted with joy at Harris' mention of her chithis.

The Senator also spoke at length about her mother Shyamala Gopalan who raised her on her own in the US. "There's another woman, whose name isn't known, whose story isn't shared. Another woman whose shoulders I stand on. And that's my mother -- Shyamala Gopalan Harris. She came here from India at age 19 to pursue her dream of curing cancer. At the University of California Berkeley, she met my father, Donald Harris -- who had come from Jamaica to study economics," she said.

Her father and mother fell in love during the civil rights movement in the 1960s, she said. Harris said that her parents split up when she was 5 year old, following which Shyamala Gopalan raised her on her own. Reminiscing about her mother's tough life, Harris said that she worked around the clock to make it work for her and her sister Maya. "She made it look easy, though I know it never was," said Kamala Harris during her speech.

Kamala Harris said that her mother taught her to keep family at the centre but also to see the world beyond themselves. She said her mother taught her to be conscious and compassionate about the struggles of people and that public service is a noble cause. "That led me to become a lawyer, a district attorney, attorney general and a United States Senator," she said.

"My mother taught me that service to others gives life purpose and meaning. And oh, how I wish she were here tonight but I know she's looking down on me from above. I keep thinking about that 25-year-old Indian woman - all of five feet tall - who gave birth to me at Kaiser Hospital in Oakland, California. On that day, she probably could have never imagined that I would be standing before you now speaking these words: I accept your nomination for vice president of the United States of America," she said.

Kamala Harris pushed for Joe Biden's presidency. She said that Joe Biden and she can rejuvenate a country that has felt the severe impact of the pandemic and deeply affected by inequity in education and technology, injustice in reproductive and maternal health care, and excessive use of police force. "There's no vaccine for racism," she said.

The mention of chithis -- probably the first time a Tamilian word has been used during a US Democratic speech -- sent viewers globally to look up the meaning of the world.

On the other hand, Indian Twitter could not stop itself from gushing on the Senator.

As someone who has a deceased Indian mother and scientist who was my best friend, I can’t believe this is our candidate for Vice President. How in my lifetime? How? @SenKamalaHarris

I literally have tears in my eyes. @KamalaHarris just said “chithis” which means auntie. My heart is so full right now

Kamala Harris, You had me on “chitti” (Tamil word for aunt)! 😆Seriously though, why aren’t we voting for her to be president!? https://t.co/z94317Dk3i

Every Tamilian signs up to vote

I'm a chitti and I approve this message.