The meeting on the sidelines of the Shanghai Cooperation Organisation (SCO) Summit here is their first interaction after Modi's re-election following the stunning victory of the BJP in the general elections last month. 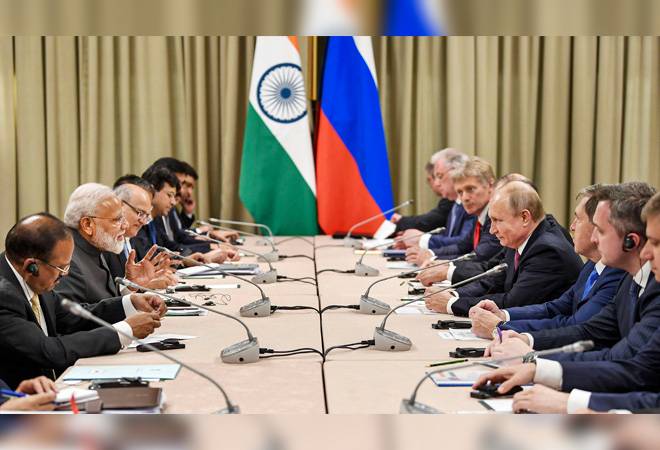 After the meeting, Foreign Secretary Vijay Gokhale said that it was a "brief but very very rich" meeting in terms of content. Photo credit: PTI

Prime Minister Narendra Modi on Thursday said he had an "excellent" meeting with Russian President Vladimir Putin and they reviewed all aspects of bilateral relations to further boost the strategic relationship.

The meeting on the sidelines of the Shanghai Cooperation Organisation (SCO) Summit here is their first interaction after Modi's re-election following the stunning victory of the BJP in the general elections last month.

"PM @narendramodi and President Putin had a wonderful meeting in Bishkek. Various subjects pertaining to India-Russia relations were discussed during the meeting," the Prime Minister's Office tweeted.

Prime Minister Modi said that the meeting with President Putin was "excellent."

"We had wide-ranging discussions on ways to further boost the India-Russia strategic relationship. We look forward to increased trade and people-to-people linkages with Russia," he said.

The meeting began with Putin congratulating Modi over his election victory.

Briefing the media after the meeting, Foreign Secretary Vijay Gokhale said that it was a "brief but very very rich" meeting in terms of content.

He said that defence and energy were key focus during their talks. The two leaders also reviewed trade and investment ties and noted that they're on an upward trajectory.

ALSO READ:Pakistan extends airspace ban along its eastern border with India till June 28

Prime Minister Modi thanked the Russian President for his support for the AK-203 Kalashnikov rifles manufacturing unit in Amethi, an India-Russia joint venture. The unit was inaugurated by Modi in March in Korwa, near Amethi.

"If we really set our minds to achieving something, we can do a great deal within a very definite timeframe. This (unit) is an excellent example of what we both were able to accomplish," Modi told Putin.

Russia has been one of India's key suppliers of arms and ammunition.

President Putin recognised Prime Minister Modi's personal contribution in strengthening bilateral relations and said that Russia awarded its highest state honour 'Order of St Andrew the Apostle' to him for initiatives he has taken to develop the bilateral relationship.

Gokhale said there will be a Russia, India and China trilateral meeting on the sidelines of the G-20 Summit in Osaka, Japan later this month.

President Putin invited Prime Minister Modi formally to be the main guest at the Eastern Economic Forum in Vladivostok, Russia in early September, and he warmly accepted the invitation, Gokhale said.

"We will do serious preparation on our side that this participation at the EEC is meaningful," Gokhale quoted the Prime Minister as telling Putin.

The two leaders recognised that the new area of cooperation are Russian Far East and Arctic region.

Responding to a question, Gokhale said there was no discussion on any regional or international issue as the focus was entirely on how to make Prime Minister's visit for the next annual summit successful.

On his part, Putin said that in the course of the past years, the two sides have done a great deal to promote their inter-state relations.

"They have developed steadily, including through your personal efforts and your attention to the development of Russian-Indian relations," he was quoted as saying in a statement issued by Kremlin.

ALSO READ:PM Modi arrives in Bishkek for the SCO summit

"We have a very busy agenda ahead - and not just within the framework of our work here in Bishkek, but also at various other platforms that we plan to use for further communication. Apart from everything else, I would like to invite you to be the main guest of the Eastern Economic Forum, which will be held in Vladivostok in September," Putin told Modi.

Modi arrived in the Kyrgyz capital on Thursday for the SCO summit, the first multilateral engagement post his re-election. The SCO is a China-led 8-member economic and security bloc with India and Pakistan being admitted to the grouping in 2017.

In December last, Prime Minister Modi, President Putin and Chinese President Xi Jinping held a trilateral meeting, the second among the three countries after a gap of 12 years, on the sidelines of the G-20 summit in Buenos Aires during which they underscored the benefits of a multilateral trading system and an open world economy for global growth and prosperity.

Earlier in October, President Putin travelled to India for the 19th India-Russia annual summit during which he held comprehensive discussions with Modi on wide-ranging bilateral, regional and international issues.