New Delhi would be Pompeo's first stop and South Korea his last during the nearly week-long visit to the Indo-Pacific region, beginning June 24, that would also take him to Sri Lanka and Japan. 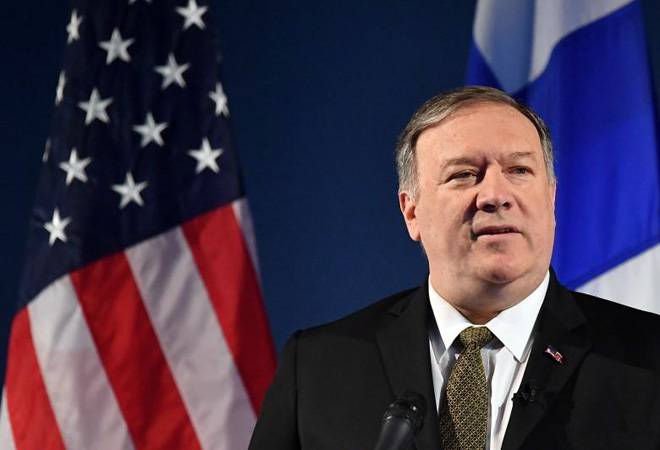 Before starting his trip, Pompeo will address the India Ideas Summit of US-India Business Council on June 12

US Secretary of State Mike Pompeo has said that his visit to New Delhi this month will be focused on advancing the "incredibly important" ties with India which is a significant part of President Donald Trump's strategy in the strategic Indo-Pacific region.

Pompeo would leave for New Delhi on June 24.

New Delhi would be Pompeo's first stop and South Korea his last during the nearly week-long visit to the Indo-Pacific region, beginning June 24, that would also take him to Sri Lanka and Japan.

Before starting his trip, Pompeo will address the India Ideas Summit of US-India Business Council on June 12.

"I'll be speaking to a group of Indian business leaders in preparation for the trip that I'll take in a couple weeks where I'll be visiting India, an important part of President Trump's strategy in the Indo-Pacific," he told reporters at the Foggy Bottom headquarters of the US State Department on Monday.

"I'm looking forward to the opportunity both to give the set of remarks about how it is our relationship is so closely tied economically, but also importantly the things that the United States and India can continue to do to build out what is an incredibly important relationship for both countries," Pompeo said.

State Department spokesperson Morgan Ortagus told reporters that Pompeo will travel to the Indo-Pacific region on June 24 through June 30 to broaden and deepen America's partnership with key countries to advance their shared goal of a free and open Indo-Pacific.

"The secretary's first stop will be in New Delhi, India. Prime Minister (Narendra) Modi's recent election victory provides an excellent opportunity for him to implement his vision for a strong and prosperous India that plays a leading role on the global stage," she said.

Prime Minister Modi during his recent visit to the Maldives underscored India's firm commitment to make the strategic Indo-Pacific an area for shared economic growth, saying it has been "our lifeline, and also the highway for trade and prosperity."

Pompeo will preview elements of a cooperative agenda during his remarks at the India Ideas Summit at the US Chamber of Commerce, she said.

His next stop will be in Colombo, where Pompeo will express America's solidarity with the people of Sri Lanka as they stand united against the despicable Easter Sunday terrorist attacks. He will also discuss promising opportunities for US-Sri Lanka cooperation based on shared commitments to a free and open Indo-Pacific region, she added.

Pompeo will then travel to Osaka, Japan, to participate in the G20 Leaders' Summit from June 28 -29, the first such gathering hosted by Japan.

On the margins of the summit, Pompeo will join Trump in meeting with Japanese Prime Minister Shinzo Abe to coordinate "on the final, fully verified denuclearization of North Korea", and discuss ways to strengthen trilateral cooperation with South Korea on "our unified approach towards North Korea" and other shared challenges, she said.

"The two leaders will also discuss ways to strengthen the United States-Republic of Korea alliance. President Trump and President Moon will continue their close coordination on efforts to achieve the final, fully verified denuclearization of the Democratic People's Republic of Korea," Ortagus said.

Also read: Bilderberg Conference 2019: What happens in the secretive meet of the world's most powerful people?

50 percent tariff on US motorcycles by India too high, not acceptable, says Trump