For 66 years the Bilderberg Conference, an unofficial conclave of the Western world's 100 most powerful people, has been meeting in secluded places under a complete media blackout. 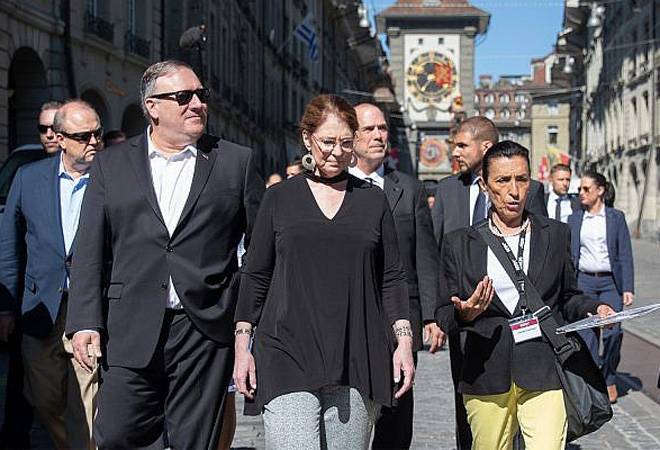 You probably have never heard of them, and there's a good reason for it. For 66 years the Bilderberg Conference, an unofficial conclave of the Western world's 100 most powerful people, has been meeting in secluded places under a complete media blackout. Invitees usually are from business, politics, intelligence and defence, with a smattering of newspaper editors who are sworn not to reveal who said what at the conference. On June 4, 2019, they concluded their 67th meeting in Montreux, Switzerland.

The security at these annual gatherings should give you an idea of how powerful the invitees are: air force jets fly overhead, commandoes ring the outer perimeter, and the local police are known to rough up anyone coming close to the conference venue.

Officially, the Bilderbergs do not exist. Only once in their history, after being harried by a small group of non-mainstream journalists, they were forced to issue a statement, saying they needed an off-the-record meeting to talk freely, without media distraction. But because these are the same people who meet regularly at Davos and G-8, what exactly are they talking about in hermetically sealed resorts?

These are not just any rich and influential people, they are the richest and most powerful people on the planet. Among the members of this club are George W. Bush, Bill Clinton, Paul Wolfowitz (former World Bank president and the godfather of the Iraq War), Henry Kissinger (who got the Nobel Peace Prize soon after he authorised chemical warfare against Vietnam), Tony Blair (best known for lying about Iraqi weapons of mass destruction), European royalty, CIA directors past and present, directors of the British secret service MI6, and other such characters.

You get the picture. This is a club of people who want to preserve Western supremacy ad infinitum.

Soviet expansion, the emergence of China, India and other former colonies as independent countries, and the bickering between Europeans and Americans worried many in the West. How could the West get back in the game?

A University of Huddersfield, England, review of British intelligence operations mentions the central role played by MI6 assets like Josef Retinger, a Polish fixer and drifter, who saw the need for a high-powered "talking-shop" to ease tension between British and American groups over Cold War disputes.

Retinger knew no politician would back his plans, so in 1952 he approached a former Nazi SS officer, Prince Bernhard of the Netherlands, and asked him to serve as honorary head of the organisation. After establishing a small European committee, Retinger and Bernhard turned their attention to the United States (US).

Born in the CIA

American Pulitzer Prize-winning author and columnist Kai Bird, writes in the book, 'The Making of the American Establishment': In late 1952, Retinger went to America to try the idea out on his American contacts. Among others, he met David Rockefeller, the late Chairman of the Rockefeller family-controlled Chase Manhattan Bank, and Bedell Smith, then director of the CIA. After Retinger explained his proposal, Smith said, "Why the hell didn't you come to me in the first place?"

Backed by endless supplies of CIA cash, on May 29, 1954, the first conference was held in the Hotel de Bilderberg (hence the name), a secluded hotel in Holland, near the German border.

Invitations were only sent to people who through their special knowledge or experience, their personal contacts and their influence in national and international circles could help to further the aims set by the Bilderberg Group.

Only once in its history has there been a no-show - in 1976, when the Virginia conference was cancelled after Bernhard was caught taking a $1 million bribe from US aerospace giant Lockheed.

Interestingly, Virginia is the most popular venue for Bilderberg Conferences; hardly a coincidence it is the home of the CIA.

Bilderberg is part of a triad which has two other members. The first is the Trilateral Commission, a private organisation that fosters closer cooperation among the US, Europe and Japan. It was established in 1973 when mutual relations between these three blocs were on a downward spiral. Interestingly, newly appointed Foreign Minister S. Jaishankar's son Dhruva Jaishankar is a member of this organisation.

Senator Barry Goldwater, the Republican Party's nominee for President in the 1964 election, explained the workings of this secretive organisation in his book 'With No Apologies': "The Trilateral Commission represents a skillful, coordinated effort to seize control and consolidate the four centres of power: political, monetary, intellectual, and ecclesiastical. What the Trilateralists truly intend is the creation of a worldwide economic power superior to the political governments of the nation-states involved. They believe the abundant materialism they propose to create will overwhelm existing differences. As managers and creators of the system, they will rule the future."

"I prefer land to niggers"

Dig deeper and you will discover that the Trilateral Commission is an off-shoot of the Council on Foreign Relations, the third member of the triad. Established in 1921, the Council has a murky history going back to Cecil Rhodes, the architect of Apartheid in South Africa.

According to the UK's Independent, the Western media rarely invokes the name of Cecil John Rhodes; his name is more associated with Oxford Scholarships than with murder. But it was Rhodes who originated the racist "land grabs" to which Zimbabwe's current miseries can ultimately be traced. It was Rhodes, too, who in 1887 told the House of Assembly in Cape Town that "the native is to be treated as a child and denied the franchise. We must adopt a system of despotism in our relations with the barbarians of South Africa". In less oratorical moments, he put it even more bluntly: "I prefer land to niggers."

When, in 1877, he first made his will, he urged his executors to use his fortune to establish a secret society that would aim to "redden" every area of the planet. He envisioned a world in which British settlers would occupy Africa, the Middle East, South America, the Pacific and Malay islands, China and Japan, before restoring America to colonial rule and founding an imperial world government.

"He was deeply impressed," writes his lifelong companion Leander Starr Jameson, "with a belief in the ultimate destiny of the Anglo-Saxon race. He dwelt repeatedly on the fact that their great want was new territory fit for the overflow population to settle in permanently, and thus provide markets for the wares of the old country - the workshop of the world."

It was a dream of mercantile Lebensraum for the English.

Rhodes used some of his vast wealth acquired from diamond mining to set up his Rhodes Scholarships and also to fund the Royal Institute of International Affairs in the UK, and in America, the Council on Foreign Relations. These institutes are ostensibly think tanks but in reality, are designed to steer the political processes of the Anglo-American bloc.

With funding provided mainly by the Carnegie Corporation, the Ford Foundation and the Rockefeller Foundation, the Council has some 5,000 members, and some of them have been key officials in many US administrations. It has influence with the CIA and the American armed forces as well and can count on Bill Clinton and George W. Bush as its backers.

Together, the Bilderberg Group, the Council on Foreign Relations and the Trilateral Commission have a degree of influence that is truly alarming. Collectively, they have the ability to bypass elected representatives.

Former AFP Editor James P. Tucker says Bilderberg and the Trilateral Commission are good at picking future American presidents. He says, "Actually, they like to own both horses in a two-horse race. Here is the line-up: Jerry Ford, Bilderberg; Jimmy Carter, Trilateral; President Bush the Elder; Trilateral and Bill Clinton, Bilderberg." In fact, Clinton was an obscure Governor from Arkansas when he attended the conference in 1991; a year later he was elected president.

The secretive meetings have given birth to many conspiracy theories. Some say Bilderberg is a group of kingmakers seeking to impose a one-world government. In a 1980 TV documentary, The Secret Government, journalist Bill Moyers dwelled on how the group is seeking to impose a supranational sovereignty in order to "shape the global economy and manage the flow of its capital".

Author Will Banyan in his book The Proud Internationalist reveals why people like Rockefeller seek absolute power: "It does not matter how much money one has. Unless it is employed to capture and control those organisations that produce the ideas and the policies that guide governments and the people who eventually serve in them, the real power of a great fortune will never be realised."

This is exactly what the character Gordon Gekko, in the iconic film 'Wall Street: Money Never Sleeps', tells a rookie trader: "It's never about the money; it's about the game between people."

The choice of Switzerland as this year's venue has grave portents for Iran as the country often represents US interests in Iran as a go-between. Also, Kushner and Pompeo's presence suggests the US might use the forum to drum up support for an attack on Iran. There is a precedent for this. One of the participants at the 2008 conference was Bassma Kodmani, a member of the Council on Foreign Relations. As the executive director of the Orwellian-sounding Arab Reform Initiative, an organisation set up in 2004 by the Council on Foreign Relations, her job is to pave the way for 'democracy' in the region. She was also a founding member of the Syrian National Council, which is a euphemism for a bunch of CIA-backed terrorists.

In an interview to The Guardian, Bilderberg expert Webster Tarpley said, "She's a NATO agent, a destabiliser, a colour revolution queen. The fact that Kodmani was there is a scary one for Syria."

What happened to Syria soon after was, to put it mildly, an absolute nightmare, with hundreds of thousands of Syrian citizens displaced or dead. The secular government of President Bashar al-Assad has managed to survive the pincer attack by the Islamic State and US-backed terrorists only because of a massive Russian military counter strike.

Considering the huge asymmetry in the military and economic power between the West and small individual nations such as Iraq, Libya, Syria, Venezuela and Iran, the West doesn't need approval from a talking shop to have a whack at them. Therefore, Bilderberg may not really be the evil cabal that it's cracked up to be. However, it doesn't hurt to have a forum where future plans and ideas can be sussed out by Western thinkers, years before they appear on anyone's radar. Since all actions germinate from thoughts, Bilderberg may have a catalytic role in the West's ultimate geostrategic aims.

The annual conference is also a pointer to the wealth of strategic thinkers the West possesses, incubates and brings together with clockwork regularity. New Delhi should learn a lesson from the West and organise something similar in keeping with India's growing economic and military stature. The era of seminars on secularism and poverty alleviation programmes is over; it's time to think global.

Equity assets give better returns than other asset classes in the long term: Swati Kulkarni of UTI AMC