In a blistering speech hours before Trump was to the deliver his acceptance speech to the Republican National Convention, Harris alleged that the president's policies have been a reckless disregard for the danger a pandemic would pose to American lives 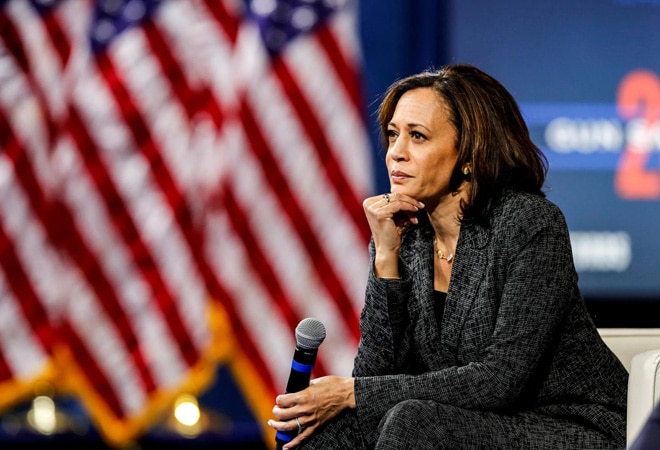 In a blistering speech hours before Trump was to the deliver his acceptance speech to the Republican National Convention, Harris alleged that the president's policies have been a reckless disregard for the danger a pandemic would pose to American lives. For the devastation it would do to our economy. For the damage it would do to communities of color who have been subjected to structural racism for generations. For the chaos that would upend our daily lives make it impossible for many of our kids to go to school make it impossible to live normally and with certainty, she said.

He never appreciated that a President swears an oath before God and country to protect America against threats seen and unseen. It's his duty. It's his obligation to protect us. And yet, he has failed. Miserably, she said. "Here's the thing, Donald Trump's incompetence is nothing new. That has always been on full display. But in January of this year, it became deadly. That's when the threat of a virus that would endanger the world first emerged. Trump dismissed the threat. Joe Biden sounded the alarm, she said.

It would be the beginning of a pattern that persists to this day. Trump telling us not to worry, that the virus will, quote, disappear, that a quote, miracle is coming. Joe Biden, saying we need a plan, a national strategy, a President who is willing to lead, willing to be a role model for our nation. For our children, Harris said. There was no immediate reaction from the president. He was scheduled to deliver his address to Republican National Convention. He and Vice President Mike Pence face challenge from former vice president Joe Biden and his running mate Harris. This was the first major policy attack by Harris against Trump after she was nominated by the Democratic Party as its vice-presidential candidate last week.

Harris alleged that Trump caved in when the US needed him to be tough on the Chinese government. On January 24th, he praised the transparency of the Chinese government. He said, quote, China has been working hard to contain the coronavirus. The United States greatly appreciates their efforts and transparency. It will all work out well. But they weren't being transparent. They blocked public health inspectors from the CDC, from getting the access and information they needed to protect American lives, she said.

Donald Trump stood idly by. And folks, it was a deadly decision. Instead of rising to meet the most difficult moment of his presidency, Donald Trump froze. He was scared. He was petty and vindictive, Harris said. As President, Joe Biden will put a plan into effect on day one, she asserted. Develop and deploy rapid tests with immediate results. Make sure testing, treatments, and ultimately, a vaccine reach all Americans, including communities of color, who have historically been left behind. Manufacture the medical supplies and protective equipment we need, she said.

And make them right here-in America, so we're never again at the mercy of China and other foreign countries to protect our own people, she added. A Biden Administration will put in place a nationwide mask Mandate-it's not a burden to protect each other. Harris alleged that before the virus hit, Trump made the country vulnerable. After it was struck, he failed to do what was necessary. As it continues, he's making it worse every day, she said.