Uber passenger who assaulted driver faces up to 16 years in jail, charged on multiple counts

If convicted on all the above counts, Arna Kimiai, could face $3,000 in fines with up to 16 years in state prison 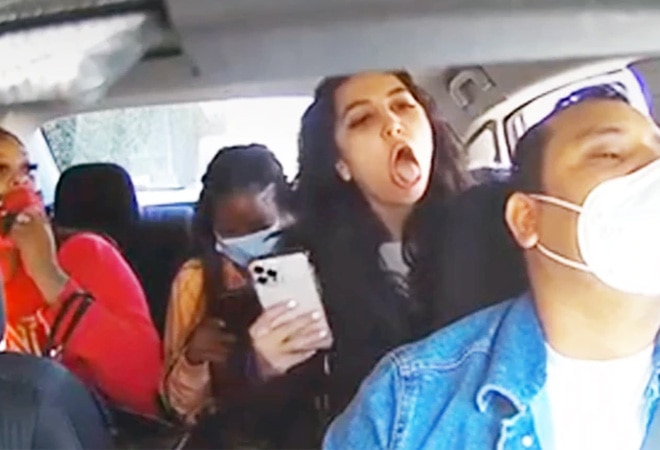 An Uber passenger, who horrified social media after she was seen coughing at and assaulting a San Francisco Uber driver in a video, could face up to 16 years in prison. Arna Kimiai, 24, was charged on multiple counts on Wednesday, March 17, the San Francisco District Attorney's Office told local media. One of the felonies she is charged with is for assault by means of force likely to produce great bodily injury against a transportation driver.

The other charge is for first-degree attempted robbery on a transit operator. In addition, Kimiai was also charged with a misdemeanour count of battery on a transportation driver and one count for contravention of a COVID-19 health order, CBS Bay Area reported. If convicted on all the above counts, Kimiai could face $3,000 in fines with up to 16 years in state prison.

The shocking incident came to light on March 7 when Subhakar Khadka, a 32-year-old driver, was assailed by a woman who along with two others hailed his vehicle. Khadka was coughed upon and assaulted by three women who also racially abused him after he denied them service for not wearing facemasks.

The attack, captured on Khadka's car camera, shows one of the women coughing in his direction before hunching forward to snatch his phone and then rip off his mask. The women can be seen berating the driver using expletives.

The Uber driver also said that another woman then pepper-sprayed inside the car and towards him after leaving the vehicle. Meanwhile, the San Francisco police affirmed that they are probing the matter and asking for help in identifying the women riders. Meanwhile, Uber has said it has suspended the account of the woman who hailed the ride.

In the footage, three women are seen sitting in the back seat of Khadka's vehicle. When he pulls over to tell them to wear their facemasks, the women can be heard telling the driver: "F*** the masks." As they continue to scream at Khadka, one of them bends forward to grab his mobile phone before ripping off his facemask.

UBER RIDERS COUGH ON, ASSAULT, PEPPER SPRAY DRIVER
Driver Subhakar Khadka, who is South Asian, says he believes he was targeted because of his race. He picked up 3 women in the Bayview yesterday afternoon on San Bruno Avenue. https://t.co/Tzr7kTfyKQpic.twitter.com/f8PiHDZ9CZ

He said that the argument started when he asked one of them to put her mask on, when she refused, he pulled into a gas station so that the woman could buy one. It was then that the women began with their rants insulting Khadka and hurling racial slurs. Following this, one of them even pepper-sprayed him as they left the vehicle.

The Uber driver, who moved to the US from Nepal eight years ago to support his family, said, "You guys are animals to treat other human beings like this."

"She pepper-sprayed inside my car, from the passenger window that was open a little bit, that was the only window open in my car," Khadka added.

"If I was another complexion, I would not have gotten that treatment from them. The moment I opened my mouth to speak, they realised I'm not among one of them, so it's easy for them to intimidate me," he told the channel.

"Since you were born and raised here in the United States, don't think the other person is less human," Khadka told the women.

Meanwhile, Uber said in a statement that the "behaviour seen in the video is appalling. The rider no longer has access to Uber." The cab aggregator also gave Khadka $120 in cleaning funds.