The storied institute from the East pips perennial favourite IIM Ahmedabad (IIMA) to the top rank in a photo finish.

Indian Institute of Management Calcutta (IIMC) has been ranked No. 1 in the 2021 edition of the prestigious survey, which also saw a record 305 institutes' participation.
BusinessToday.In

For the first time in several years, the BT-MDRA Best B-schools survey has unearthed a new winner. Indian Institute of Management Calcutta (IIMC) has been ranked No. 1 in the 2021 edition of the prestigious survey, which also saw a record 305 institutes participate in an exercise that took over three months. In a close contest, IIMC pipped IIMA by a mere 0.1 points (897.2 versus IIMA's 897.1).

Last year's top-ranker IIM Ahmedabad (IIMA) topped three of the five primary parameters this year (learning experience, living experience and Selection Process, Governance & Establishment), and IIMC topped in the other two (placement performance and future orientation). But it was IIMC's big score in future orientation that finally helped it topple the perennial favourite for the first time.

The other notable feature of this year's survey was the debut of another storied business school, IIM Lucknow (IIML), which finished at No. 4, behind IIM Bangalore (IIMB). Interestingly, the top four positions were taken by government institutes, namely the IIMs, and rank No. 5 was taken by a private institution, SPJIMR (SP Jain Institute of Management and Research) of Mumbai. Apart from the main ranking of the institutes, Business Today has also published ranks of schools based on each primary parameter, cities, zones, and return on investment (RoI). Separate rankings of private and government institutions have also been published. 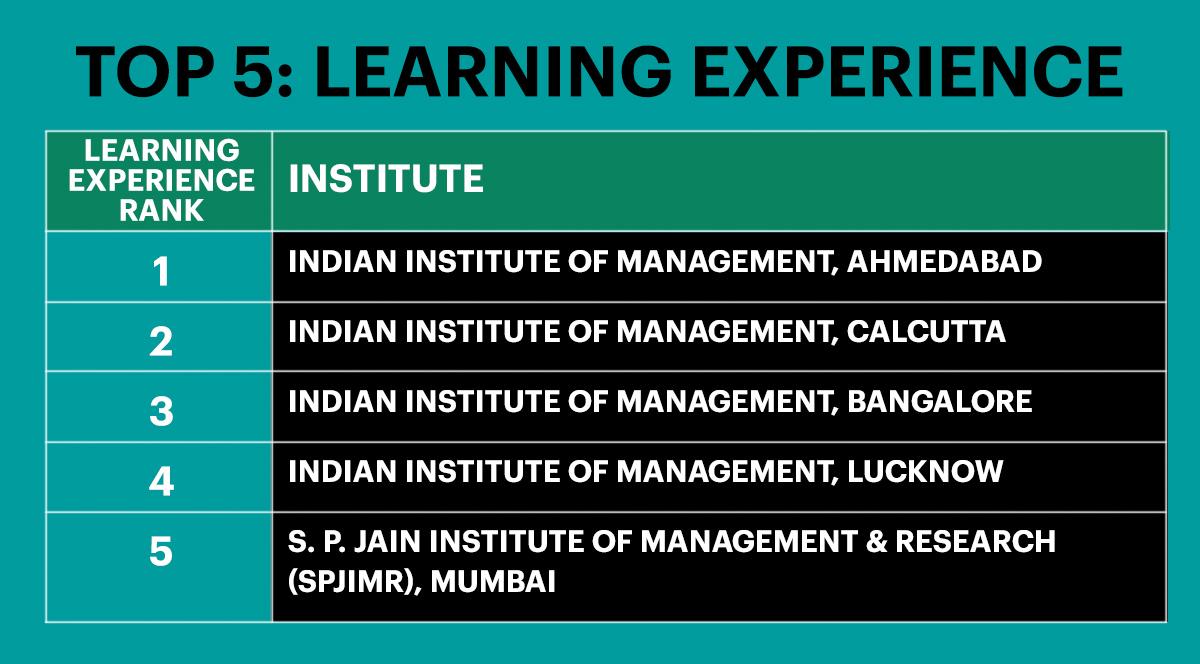 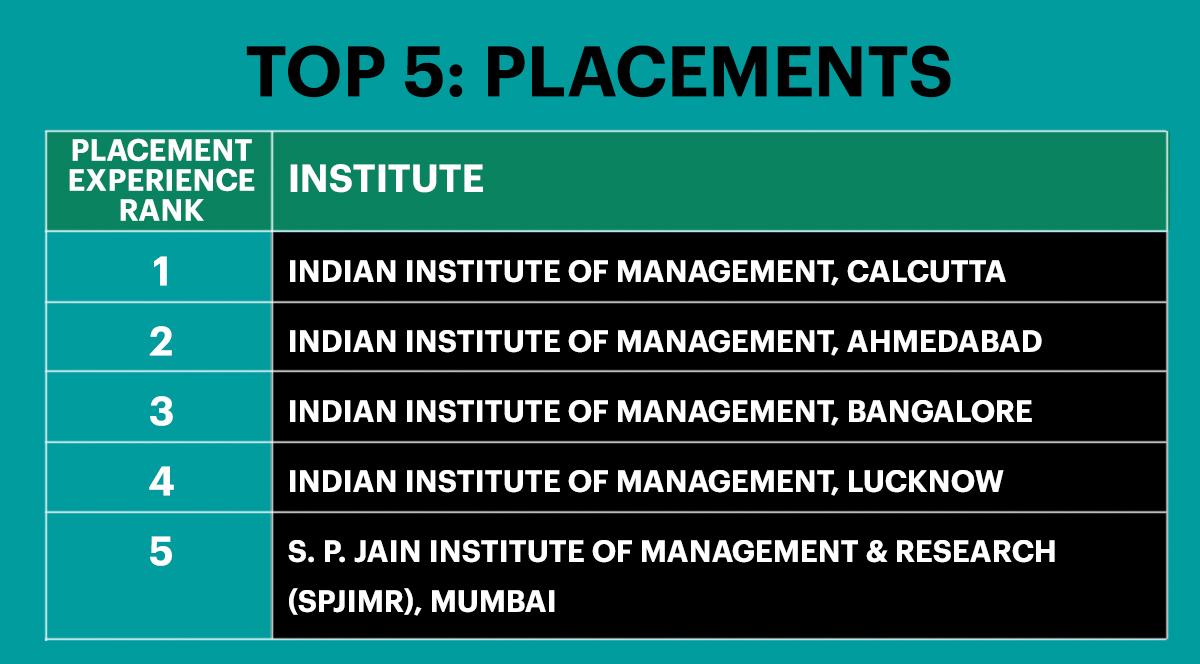 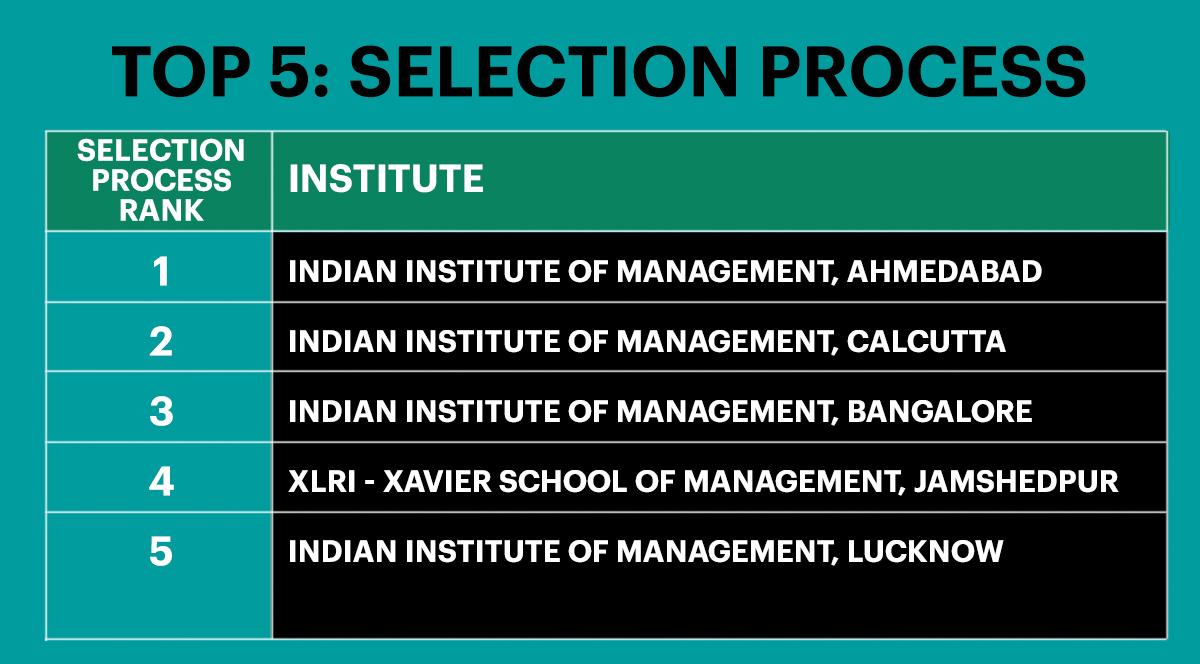 In terms of salary trends, top schools have seen little difference between the average salaries offered on campus this year compared to last year. The top 10 B-schools saw an increase of 4% in the average salaries offered, while the rest of the colleges in the Top 100 saw less than 1% jump in salaries. Course fees increased at the top B-schools, meanwhile, have increased by 3-4%.

Seen over a longer, period, though, both salaries and course fees have risen significantly. 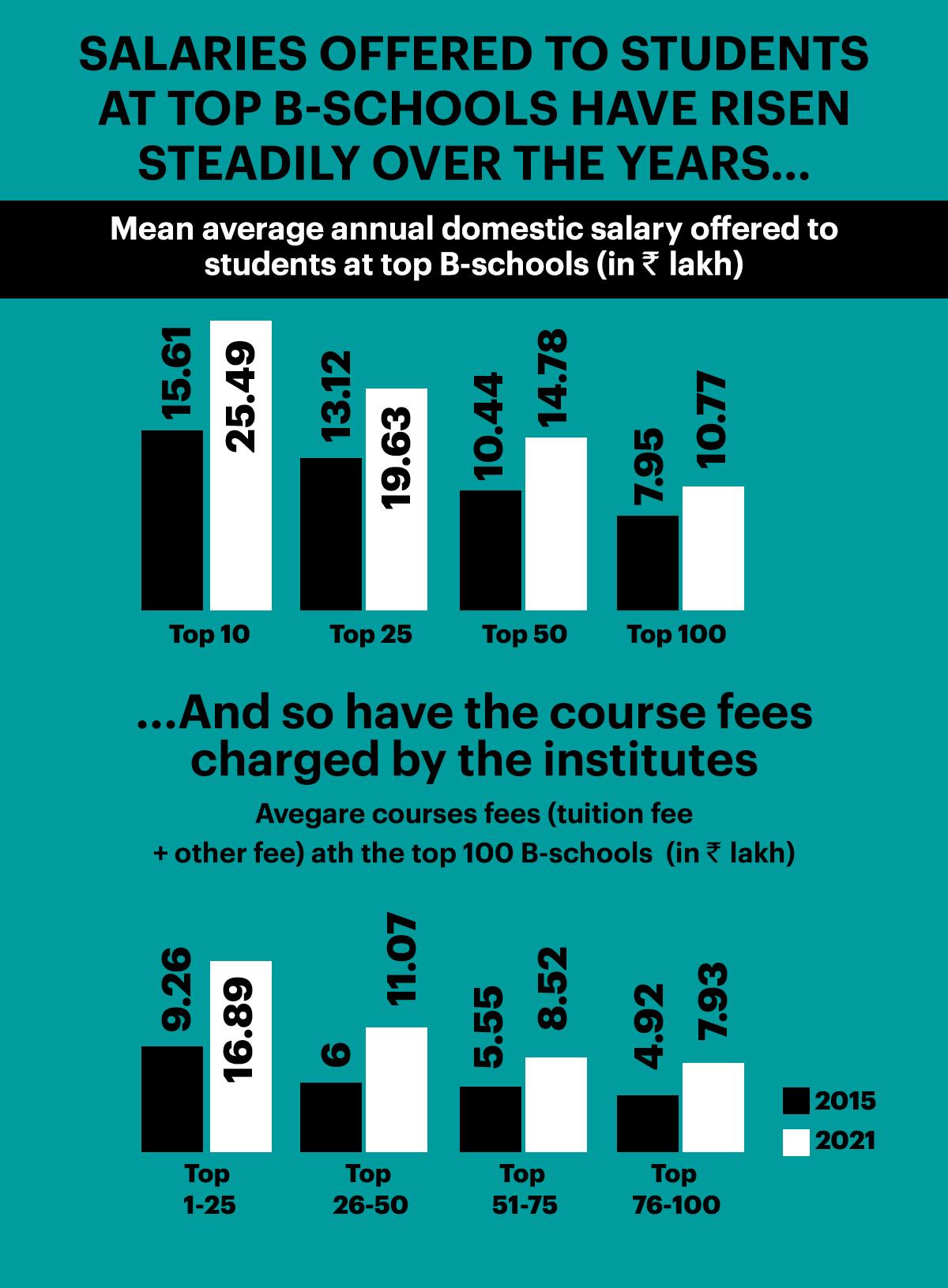 Not surprisingly, government institutes, which have lower fees, have shown much higher RoI for students investing in B-school education. The average RoI of government schools in the top 100 is 1.42, and for private schools, the number is 0.8. RoI is calculated as the Average Annual Domestic salary/Course fees (Tuition fee + Other fees) for the entire course.

The institute that had the highest RoI of the 305 that participated in the survey was the Department of Commerce, Delhi School of Economics, University of Delhi, which had an astounding RoI of 33.3. All the top five institutes with the best RoI are government institutes. The other big trend in business education this year is the distinct imprint of the pandemic on business school education. As industries and companies have moved en masse to digital methods of doing business, B-schools have had to course correct and add modules on artificial intelligence (AI), machine learning (ML) and other digital technologies to their MBA courses.

In the long run, such integration of industry needs will only help India produce more B-school graduates who are ready to join the workforce with digital skillsets in addition to management skills.

The BT-MDRA Best B-school Survey has established itself as the primary reference point for business education aspirants over the past nine years.

The process involves the aggregation of data from India's top B-schools through a detailed questionnaire spanning almost 20 pages.

The data is collected across five parameters (mentioned above), and 127 sub-parameters or attributes. This year, after the institutes submitted these details to BT and MDRA, back-checks were done through telephonic calls, confirmation through email, etc.

With physical visits to campus ruled out due to the pandemic, the research team virtually visited 52 institutes (on the basis of random selection) and verified the details submitted. All data submitted were for the current academic year.