Along with rice, the coverage area of many other Kharif crops, especially oilseeds, has decreased compared to last year, the Agriculture Ministry's latest weekly area coverage data shows.

Sowing areas for Kharif crops dropped more than five per cent compared to last year, while rice witnessed a 27 per cent drop as of July 1
Dipu Rai

Rice production in India, the second-largest grower, may face setbacks because of poor monsoon progress in June — it was deficient by eight per cent. This has forced farmers to delay sowing in many parts of the country.

Along with rice, the coverage area of many other Kharif crops, especially oilseeds, has decreased compared to last year, the Agriculture Ministry's latest weekly area coverage data shows.

Sowing areas for Kharif crops dropped more than five per cent compared to last year, while rice witnessed a 27 per cent drop as of July 1. Cumulative rainfall during June 1-30 is right per cent below LPA.

Only 15 of the 36 subdivisions received normal rainfall during June 1-July 3, 2022. The delay in monsoon advancement in the first two weeks of June slowed down the progress of Kharif sowing

The latest sowing data indicates that poor monsoon in growing areas may hamper rice production. So far, rice prices are stable. But any drop in harvesting could heat up prices domestically and globally. Currently, many countries are looking for alternatives to costly wheat.

Around 150 countries import Indian rice. The onset, duration, and quantity of rainfall in June and July shape the rice market — and other Kharif crops — which is an important factor in food security. 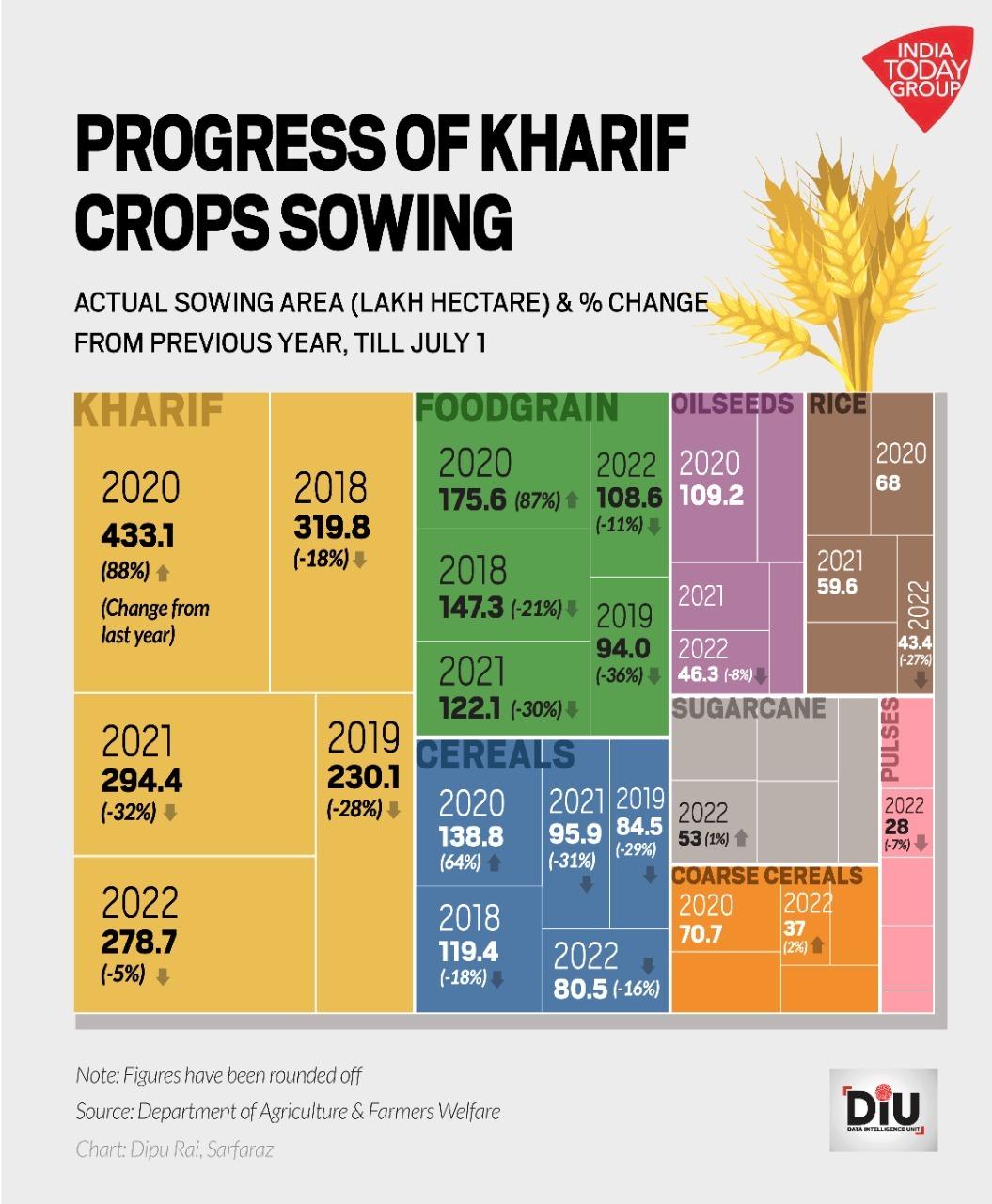 The sowing of Kharif crops continues to be sluggish. It was 278.7 lakh hectares as of July 1 against 294.4 lakh hectares in the previous year, almost five per cent lower. Areas sown under rice and coarse cereals were 27 per cent and 16 per cent lower than 2021.

Oilseeds faced a 5-18 per cent drop in active sowing area compared to last year as of July 1. On the other hand, sugarcane acreage has not changed greatly. Pulses and fibres, in contrast, reported an improvement in the ongoing Kharif season.

Sowing has been badly affected in Odisha, Chhattisgarh, Jharkhand, West Bengal, and Bihar — which produce nearly one-fifth of Kharif crops. As of July 1, Kharif sowing in these states reached about 16.44 lakh hectares, almost 12 times less than the average area. Initially, a bullish rainfall forecast had raised expectations of a bumper Kharif crop. But rainfall in June, the first month of the monsoon, was subpar. As a result, farmers delayed sowing.

The monsoon set in three days in advance in Kerala on May 29, against its usual onset on June 1. The monsoon has since advanced further to cover parts of Karnataka and Tamil Nadu well before the normal date. The all-India June rainfall was 152.3 millimetres (mm) against the normal of 165.3 mm, an almost eight per cent deficit.

The latest IMD data shows thirteen sub-divisions reported deficient (20-59 per cent below LPA) rainfall. Still, not a single sub-division reported large deficient rainfall (60 per cent or more below LPA). However, eight subdivisions received excess (20-59 per cent above LPA) and large excess (60 per cent or more above LPA) rainfall. July right now promises to be better for Kharif crops. Kharif crops are grown with the onset of monsoon in different parts of the country, and the crop is harvested in September-October. From paddy to coarse cereals and oilseed to cotton, crops grown during this season are important. Assam, West Bengal, coastal areas of Odisha, Andhra Pradesh, Telangana, Tamil Nadu, Kerala, Maharashtra, Uttar Pradesh, and Bihar are some of the most critical rice-growing regions. Punjab and Haryana, known for wheat farming, have also joined the league of important rice-growing states.

In the second week of June, the government announced the minimum support price (MSP) for this year. The government has offered nearly four to nine per cent more MSP than last year. For instance, the MSP on common paddy has been raised to Rs. 2,040 per quintal (5.2 per cent), while MSPs of pulses such as tur, moong, and urad have been hiked by 4.8-6.6 per cent.

June and July are the most crucial months for sowing Kharif crops. Unfortunately, June ends with a deficit, and now all eyes are on July rainfall data. Any shortage or spatially scattered or irregular rainfall may exacerbate the global food crisis.