Locusts attack in India: Farmers have been advised to play loud music to drive the insects away and save crops. Locusts don't attack animals or humans but can devastate crops and other areas of greenery

Farmers have been advised to play loud music to drive the insects away and save crops. Locusts don't attack animals or humans but can devastate crops and other areas of greenery.

According to Soumitra Dasgupta, Inspector General, Wildlife, the attack of the locusts this year is huge. "It is a once in a three-decade situation and timed very badly for us as we are already dealing with coronavirus," Dasgupta added.

Meanwhile, India has proposed to Pakistan and Iran for a coordinated approach in dealing with the situation. 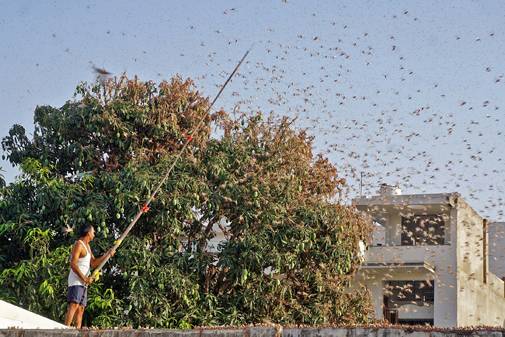 Here is the situation state-wise:

Farmers in Jabalpur have arranged water tankers and chemicals for spraying in order to drive away locusts from attacking farms. Besides, farmers in Sehore district have been beating utensils. In MP's Mandsaur district, swarms of locusts arrived on Sunday. However, scientists from the Locust Team, Agricultural Science Department removed 60 per cent of locusts by spraying disinfectant.

Locust swarms have arrived in Jhansi from Rajasthan. Besides, the swarms of locust have started heading towards Mathura as well.  Mathura administration has formed a task force to deal with any potential locust attack in the district. The district magistrate said 200 litres of Chloropyriphos have  been kept as reserve to prevent locust attacks. The farmers have also been advised to plough their fields as the insect prefers breeding in sandy soil. Locust attack has been reported from Ganganagar, in north Rajasthan.  The swarms of locusts entered Rajasthan from Pakistan earlier this month.  As per union Agriculture Ministry, Rajasthan is the worst-affected state. Some swarms of locusts have moved to Karauli and other nearby areas.  Jaipur and Dausa have now been cleared of locusts. Locusts have damaged oranges orchards and vegetable plantations in some areas of Nagpur and Wardha districts in Maharashtra. Agriculture workers started spraying pesticides and chemicals on plants and fields from truck-operated sprayers and fire extinguishers.

Moreover, in the last couple of days, four to five villages in the Vidarbha region have come under attack. Now, reports are emerging that a swarm of desert locusts may head towards national capital Delhi in next few days, if wind speed remains favourable.

Entomologists in the capital said that the city could suffer greatly as Delhi has a 22 per cent green area.