Private scheduled domestic airlines posted aggregate operating profits of Rs 467 crore in the first nine months of FY. However, they are still staring at a bleak financial performance as the above information was available only for five out of 12 private carriers. Though, if you add the operational losses of Rs 2,557 crore of the three national carriers, the total operating profits of scheduled Indian carriers turn red at Rs (-) 2,090 crore for the period between April- December 2019. These figures are as per the provisional data provided by the Indian carriers in a Rajya Sabha reply. The sample excludes private carriers such as Go Air, Air Deccan, Air Odisha, Air Heritage, Star Air, Vistara and Zoom Air which have not submitted the required information, as per the Rajya Sabha reply.

A quarterly snapshot reveals that these five private domestic airlines posted an operating profit of Rs 1,770 crore in the first quarter of this fiscal but slipped into negative territory by almost an equal amount, at Rs (-) 1,818 crore in Q2FY20 but saw a turnaround with Rs 515 crore operating profits in the December quarter. The combined operating profits of national airlines which includes Air India, AI Express and Alliance Air though remained in negative territory in all the three quarters of 2019/20- Rs (-)834 in Q1FY20, Rs (-) 380 in Q2FY20 and Rs (-) 1,342.7 crore in Q3FY20. The overall operating revenues of these scheduled carriers jumped from Rs 21,535 crore in the first quarter to Rs 23,183.7 crore in Q2FY20 and to Rs 24,375.1 crore in Q3FY20. The total operating expenses increased by Rs 4,606 crore, during the period. 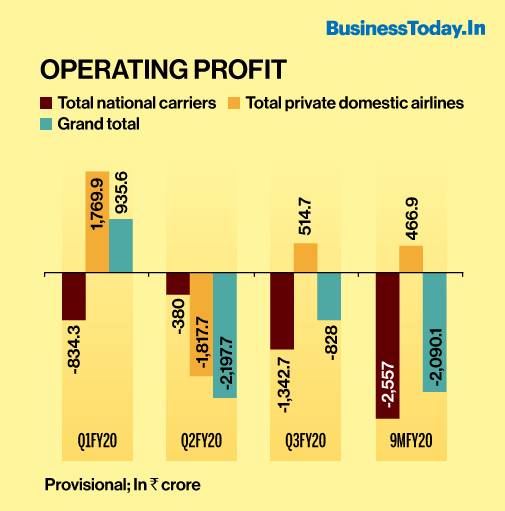 The country's aviation sector hit a rough patch as the combined operating profits of scheduled Indian carriers in 2018/19 worsened for the first time since 2015/16. Around 12 private carriers (excluding Jet Airways) and three national carriers posted aggregate operating loss of Rs 7,088 in 2018/19. The carriers posted cumulative operating profits of Rs 7,696 crore between 2015/16 and 2017/18. Some prominent loss-making airlines included GoAir, SpiceJet, Vistara and IndiGo with operating losses of Rs 897 crore, Rs 266 crore, Rs 846 crore and Rs 149 crore, respectively, in 2018/19, as per the provisional data (as on June 2019).

The poor show can be primarily attributed to the weak single-digit growth in passenger traffic which moved to its slowest pace in over five years. Domestic air passenger cumulatively grew by 3.24 per cent during April-December 2019 compared to 17.2 per cent growth in the corresponding period last year. The growth averaged around 19.6 per cent over the corresponding period in the past five years. One of the crucial factors, the prices of aviation turbine fuel actually fell during the period, the ATF prices in Delhi declined 1.2 per cent between April and December 2019. 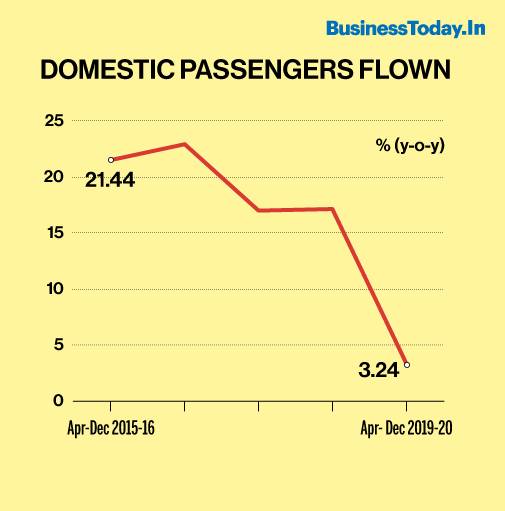 Go Air and Vistara whose quarterly information is still pending, as per the Rajya Sabha reply have seen an approximate rise of 29 per cent and 50 per cent in their passenger traffic during April-Dec'19 compared to April-Dec'18. But will their financial performance meet the same fate this year or a growth in their passenger traffic will help reduce the losses of the aviation sector remains to be seen.