For flights less than 500 Km or one hour, 50 per cent of seats on every flight will cost Rs 2500 per seat under the UDAN scheme.

Other carriers which have won the bids to fly to unserved airports in tier-2 cities include Air India's subsidiary Alliance Air, Air Deccan, SpiceJet, Air Odisha and Turbo Megha.

50 per cent of seats on every flight will cost Rs 2,500 per seat under the UDAN scheme. This will be applicable for flights where the distance is less than 500 km or one-hour.

Over 45 unserved and under-served airports would be connected under the scheme - UDAN (Ude Desh ka Aam Naagrik) that seeks to make flying more affordable.

"This will have a positive effect on the economy, in terms of employment and investment," Raju added.

India's domestic air passenger traffic grew at a record breaking rate of 23 per cent in 2016 -  amongst the highest in the world.

In a century of Civil Aviation in India, only 76 airports became operational with scheduled commercial flights. With UDAN, the government plans to connect 33 unserved airports.

Announcing the names of winning bidders and the routes, civil aviation secretary RN Choubey said 128 routes are being awarded to a total of five operators.

UDAN will stimulate the growth of regional aviation market in India, Minister of State for Civil Aviation Jayant Sinha tweeted.

Indian civil aviation industry is all set to welcome a new era of transformation as UDAN connects many new destinations, Sinha added.

The airports that would be connected under UDAN include Bhatinda, Puducherry and Shimla.

Under UDAN, the operators would be extended viability gap funding.

The amount is estimated to be around Rs 205 crore per annum for the operators chosen in the first round of bidding, Choubey added.

Minister of State for Civil Aviation Jayant Sinha said the scheme provides for various benefits including no airport charges and three-year exclusivity on the routes.

UDAN is expected bring the Indian aviation sector to 31 new cities. Here are the new routes. 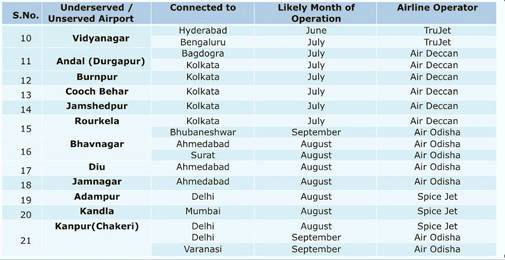