Yes Bank scam news: The painting which is a portrait of Rajiv Gandhi was painted by artist MF Hussain was bought by Yes Bank founder Rana Kapoor in the year 2010 for a whopping Rs 2 crore

The federal probe agency seized the portrait from Kapoor's house in Mumbai and took it to its Mumbai Zonal office where he is being kept in custody.

ED confiscated the painting of Rajiv Gandhi under the Prevention of Money Laundering Act (PMLA) and suspects it to be bought with the proceeds of crime.

The painting which is a portrait of Rajiv Gandhi was painted by artist MF Hussain was bought by Kapoor in the year 2010 for a whopping Rs 2 crore. The sketch was given to Rajiv Gandhi in 1985 at the Congress party's centenary celebration ceremony.

Back in 2010, Priyanka Gandhi had also written a thank you letter to Kapoor that reads, "Thank you for purchasing the portrait of my father, Shri Rajiv Gandhi painted by Shri MF Hussain which was presented to him in 1985 at the ceremony of Congress Party's centenary celebrations and is present in my ownership and possession."

Business Today has seen a copy of the letter. 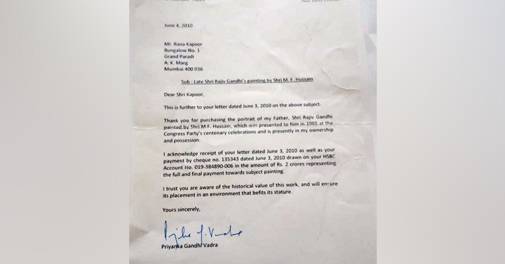 The ED had placed Kapoor under arrest after being interrogated for around 15 hours at the wee hours on Sunday. He has been sent to ED's custody till March 11. The probe agency had registered a fresh Enforcement Case Information Report (ECIR) on Saturday against Kapoor before placing him under arrest. The ECIR was registered following the CBI FIR against Kapoor, DOIT Infra Ventures LTD, Kapil Wadhawan and DHFL.

"The fresh complaint was registered only upon discovery and enough evidence of the two suspicious transactions which were thoroughly checked and verified through Kapoor, his family members, relatives and other beneficiaries involved," ED said in an official statement.

"The legal team worked till late night with Joint Director Satyabrata Kumar discussing legal issues and challenges. Kumar and the legal advisor left the office only at 4 am after Kapoor was placed under arrest," it added.

DoIT Urban Ventures Ltd is a company allegedly held by his family members and promoter-director of DHFL Kapil Wadhawan.