News
Jobs
Data Fudging: No data on unemployment means no attention, no remedy

From suppression of key statistics to fiddling with GDP and budget numbers, the Central government's data management has come under sharp attack. Economic statistics are vital to public debate and policy making. The first part of a two-part series looks at the implications of not releasing data on unemployment and farmers' suicide.

All opinion polls since 2017 have consistently thrown up two main concerns - unemployment and agrarian distress - barring national security which found place after the Pulwama terror strike and its aftermath.

Therefore, it is incumbent on any government to address unemployment and agrarian distress on high priority through evidence-based policies and strategies for which collection and analysis of economic statistics is critical. What, however, is on display is quite the contrary.

This is also in line with the household surveys by the Centre for Monitoring of Indian Economy (CMIE) which says unemployment rose to 7.2% in Feb 2019 and that the workforce shrunk by 7.5 million between February 2017 and February 2019.

Prudence would demand that the Central government took serious note of the PLFS, analyse the findings and set the stage for appropriate response. Instead, it chose to call it a 'draft' and junk it leading to the resignation of PC Mohanan, head of the National Statistical Commission - the final authority to clear the release this data - and another of its independent member. Mohanan said it was not a draft but the final report. There is a clear pattern to this behaviour of the government more of which will be seen later in the narrative.

The NSSO report is not the only one to be dumped. There are two other employment specific reports that the Central government's labour ministry brings out periodically - the Annual Employment-Unemployment Survey (EUS) and Quarterly Employment Report (QES). The 6th EUS report for 2016-17 and the QES reports after the October 2017 quarter have not been released - long after these were due - apparently because these too show unflattering job scenario.

Strange as it may sound, the government is instead presenting all kinds of irrelevant and unrelated economic statistics as evidence of job creation, like the growth in the number of registered members of the Employees' Provident Fund Organisation (EPFO). No less than the Chief Statistician of India (CSI) Pravin Srivastava, appointed to the office by this very government in October 2018, has stated clearly that this data is not about job creation but should be seen as proxy for formalisation of jobs. That should have chastened the rest but did not.

Similarly, growth in the number of subscribers to the National Pension Scheme (NPS) is cited as evidence. Everyone knows that the NPS is a voluntary scheme for the private sector and its growth can only mean greater awareness or adoption of it, rather than creation of jobs.

Other such unrelated data being offered are the sale of trucks and autos and the number of professionals like chartered accountants, engineers and doctors passing out every year. How these are evidence of job creation is anybody's guess.

Last month, the government declared that it would release the jobs created by the MUDRA loans - a refinancing scheme that re-routes the priority sector lending to non-corporate, non-farm small/micro enterprises. India Today has already shown that only 3% of MUDRA loans have the potential to create jobs; there is no direct evidence of any job being created. Not surprising that the government has put that report into deep freeze.

Suppression of relevant data on unemployment has done the obvious: The last budget (2019-20) did not acknowledge the problem or proposed any remedy. This means we are heading for more trouble.

So is the case with the farmers' suicide. Until a few years ago, the National Crime Records Bureau (NCRB) would religiously release such data every year. Now this has been stopped after 2015 without any explanation whatsoever. The obvious reason is that the government does not want the bitter truth to come out.

The NCRB has been releasing this data since 1995. Between 1995 and 2015, it reported 3,21,428 such deaths (an average of over 16,000 suicides a year) spreading across Maharashtra, Karnataka, Andhra Pradesh, Madhya Pradesh, Chhattisgarh and others.

The last NCRB report of 2015 shows that while the number of suicide has fallen (see the table below) as a percentage of the total suicide it has gone up. 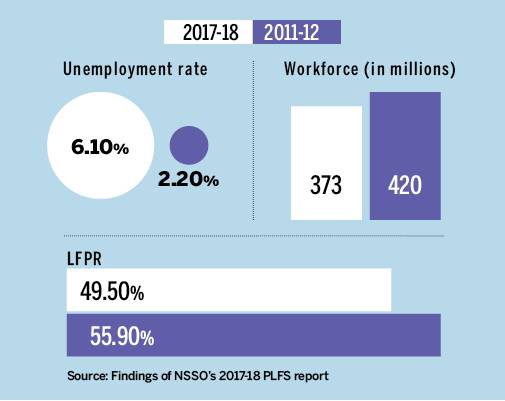 It also says that the primary reason for farmers' suicides is 'bankruptcy or indebtedness' (38.7%), followed by 'farming related issues' (19.5%) in 2015. How indebted are the farmers? According to the All India Rural Financial Inclusion Survey 2016-17 by NABARD, the average indebtedness of an indebted agricultural household is Rs 1.05 lakh.

But what did the government do? In the 2019-20 budget, the government announced Rs 6,000 for small and marginal farmers - a small fraction of Rs 1.05 lakh of indebtedness - but there was no mention of indebtedness or suicides. When the Congress promised loan waivers for farmers in the assembly elections in Rajasthan, Madhya Pradesh and Chhattisgarh, the entire BJP-led government at the Centre started criticising the party, even when eight of their own party ruled states, including Uttar Pradesh (2017), Maharashtra (2017), Assam (2018), Gujarat (2018) Jammu and Kashmir (2017), Chhattisgarh (2015), Rajasthan (Feb 2018 under Vasundhara Raje), Madhya Pradesh (Mar 2018) have declared loan waivers.

No data means no attention, no remedy

Questioning the government's opacity regarding economic statistics, 108 economists and social scientists from across the world said: "This is the time for all professional economists, statisticians, independent researchers in policy - regardless of their political and ideological leanings - to come together to raise their voice against the tendency to suppress uncomfortable data..."

Keeping with the strange times, 131 chartered accountants, some of them known government sympathisers, hit back at the economists and social scientists, dismissing the objections as "politically motivated and baseless" and that most "independent professionals have no doubt about the remarkable progress India has achieved in the last five years".

In the second part, we will see how India's growth story is built on doubtful data.

ALSO READ: Data fudging: Dressing up GDP and budget numbers does no good to economy