Unemployment rate rises to 14.5% in week ending May 16: CMIE

In past year, unemployment was highest in May at 21.73 per cent, when country was facing wrath of first coronavirus wave. In second Covid-19 wave, April turned out to be worse than expected when it came to jobs as states resorted to strict lockdowns

Unemployment rate shot up from 6.5 per cent in March to 7.97 per cent in April
BusinessToday.In

In the past year, unemployment was the highest in May 2020 at 21.73 per cent, when the country was facing the wrath of the first coronavirus wave. In the second Covid-19 wave, the month of April turned out to be worse than expected when it came to jobs as states resorted to strict lockdowns. 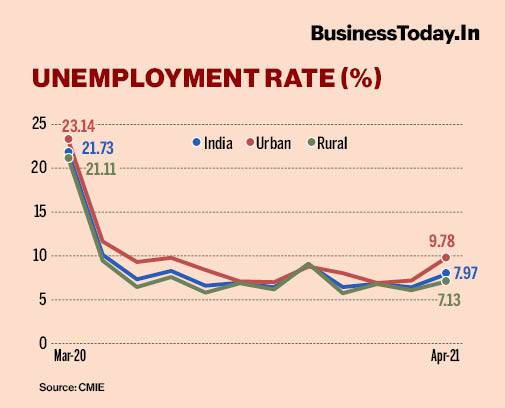 As per the CMIE, the lockdowns could have denied people from seeking employment and caused a fall in labour participation. It said the economy was not in a position to provide jobs to a large number of people.

As per the think tank, while the fall in the LPR could be attributed to the partial lockdowns, the fall in employment cannot be attributed to the lockdowns. "Most of the job losses are from the agricultural sector, which is not impacted by the lockdowns. Of the 7.35 million people who lost employment in April, 6 million losses were from the agricultural sector. April is a lean month for employment on the farms. The rabi crop is harvested by then and preparations for the Kharif crop usually begin only in May. Agriculture employed 120 million in March. This dropped to 114 million in April," it said.