Data sourced from CEIC website showed that India saw the steepest fall in exports in April compared to a group of 20-22 countries, whose April numbers were available -- most of which belonged to the Asia & Oceanic region

India's export and import growth plunged to historical lows in April with year-on-year (y-o-y) export contraction of 60.3 per cent compared to a decline of 34.6 per cent in March. The country was hit the hardest among 22 countries as it grappled with disruptions in both domestic and global demand and lockdown-induced logistics challenges. This has put India in an awkward predicament as many other emerging nations were not hit as hard.

Data sourced from CEIC website showed that India saw the steepest fall in exports in April compared to a group of 20-22 countries, whose April numbers were available -- most of which belonged to the Asia & Oceanic region. "The 60 per cent contraction in the country exports in April is alarming and is the direct consequence of the COVID-19 led lockdown not just in India but also in the partner countries that has hampered the movement of goods. The global economic slowdown has dented demand and to add to that the large-scale logistical disruptions and labour shortages in the country have been significant contributing factors that have impacted exports," said Kavita Chacko, Senior Economist, CARE Ratings. 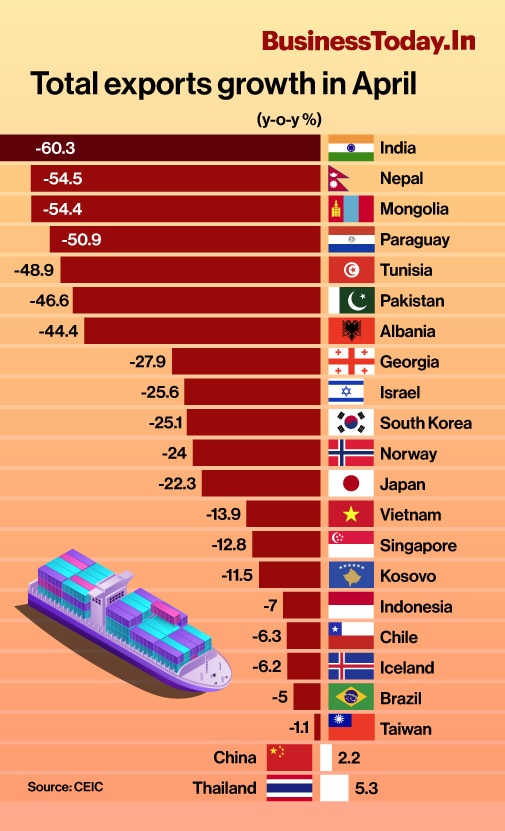 India's next-door neighbour Nepal quietly took the second spot with almost 55 per cent y-o-y de-growth while the other neighbour, Pakistan settled with nearly 47 per cent exports de-growth in April.

Japan, where the coronavirus impact was delayed compared to other South East Asian economies, saw its exports crashed by 22.3 per cent in April compared to 11.7 per cent fall in March. China, the initial epicentre of the coronavirus outbreak saw exports growth turning significantly positive in April after three months of sharp decline. It was the only other country after Thailand to record a growth in its exports during the month.

April, the month of global lockdown, saw world economic activity coming to a standstill and witnessed major indices of manufacturing and services across countries declining to record lows due to supply-side disruptions. The demand shock, thus, weighed heavily on commodity exporter countries as their currencies depreciated relatively more sharply.

Exports from goods and services currently contribute to almost 20 per cent of the country's GDP and Chacko believes that the extent of impact of exports on the country's economic growth would be contingent on the pick-up in global economic activity.

India's imports fell to 58.6 per cent in April versus a 28.7 per cent fall a month earlier. Thus, the overall trade deficit narrowed to $6.8 billion from $9.8 billion over the last two months.

The pick-up in exports is expected to be slow and gradual and would be linked to the containment of the global spread of the pandemic and the revival in global demand. "Exports from the country are likely to be pressured for the rest of FY21. Demand would be subdued given the sharp global economic slowdown. The financial stress of the domestic exporters, many of who are MSMEs, coupled with the labour shortages would pressure the country's exports. Although with the easing of the lockdown there could be an improvement," she added.

However, lower oil prices, at the same time, will save resources for domestic absorption for oil-importing countries like India.