SBI has revised its MCLR by 15 bps across all tenors with effect from August 10, 2019

State Bank of India (SBI), the country's largest lender, on Wednesday slashed home loan rates after the Reserve Bank of India (RBI) cut its key repo rate for the fourth time this year. Repo rate is the interest rate at which the RBI lends money to banks.

SBI said it has cut its MCLR (marginal cost based lending rates) by 15 basis points (bps) across all tenors with effect from August 10, 2019, a move which is likely to provide some respite to home loan borrower. When the cost of borrowing goes down for banks, they are able to lower their respective MCLR, which directly impacts home loans. 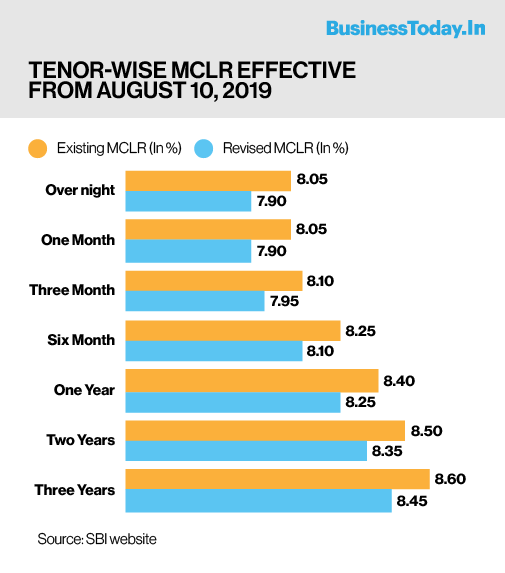 The announcement came within a couple of hours after the RBI slashed key policy rates by 35 basis points to 5.45 per cent from 5.75 per cent on Wednesday with immediate effect. With the fourth cut in a row, the repo rate stands lowest level in the past nine years. After the rate cut, EMIs on home loans and other loans are likely to come down significantly.

Earlier in April, SBI had cut the lending rates by 5 basis points across all tenors after the RBI lowered the repo rate by 25 bps from 6.25 per cent to 6 per cent.

From July 1 this year, state-run lender introduced a repo rate-linked home loan product. This means interest rate on this new home loan product gets revised automatically whenever there is a change in repo rate.

Among others, private sector lender HDFC Bank has reportedly announced a 0.10 per cent cut in lending rates across all tenors, effective Wednesday.