News
LATEST
Corporate
What companies can learn from their rivals' success

What companies can learn from their rivals' success

BT looks at three companies - one each from the real estate, auto, and aviation sectors - all of them trying to overcome difficulties, and what they can learn from a more successful competitor.

Our strength lies in on-time performance, low fares and hassle-free service: Aditya Ghosh, President, IndiGo
Rare is a company that admits to having learnt a trick or two from a competitor. More so, when it is not in great shape itself. Yet often there is a good deal companies facing tough times can imbibe from better-placed rivals. There are lessons galore in business strategy, leadership, communication, and conservatism during times of uncertainty they could pick up by closely observing their more successful peers.

This package looks at three companies - one each from the real estate, auto, and aviation sectors - all of them trying to overcome difficulties, and what they can learn from a more successful competitor. To round it off, Henrich R. Greve, Professor of Entrepreneurship at INSEAD, Singapore, writes a column on the subject, laying out, with global examples, the gains and the challenges for companies attempting to emulate their peers.

Vikas Oberoi's incessant doodling while meeting visitors in his office may give the impression of a man distracted. But his answers to questions - and his actions as Chairman and Managing Director of Oberoi Realty - reveal one with unwavering focus.

The 43-year-old has made some smart moves since taking over the reins of the company from his father in 1998. In the past few years, Oberoi Realty's revenue and profit have risen steadily with margins too staying healthy. It remains debt-free at a time when its competitors are reeling under a huge pile of debt. 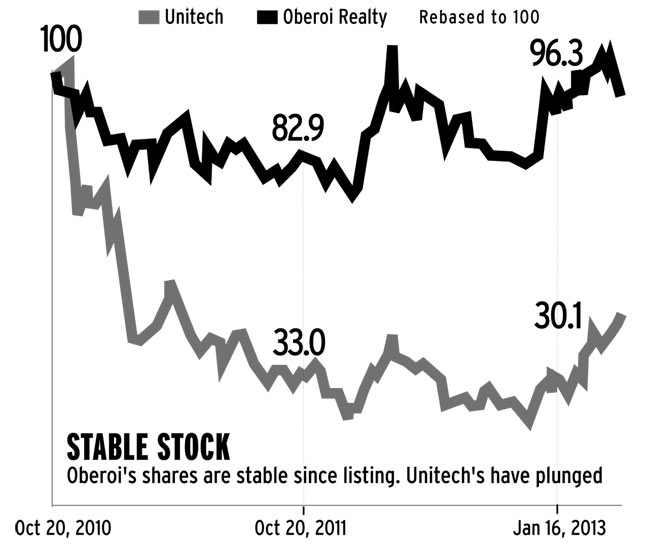 The loss of the No.2 spot is not the only problem for Unitech. Its current market value is barely a tenth of the $15 billion peak it touched in 2007. Revenue and profit have fallen for four years in a row through 2011/12, and are likely to drop this fiscal year as well. Its margins are under pressure, debt burden is high, and its reputation has taken a beating as it failed to finish projects on time.

What has Oberoi done right that Unitech did not?

Oberoi's healthy situation is due largely to well-timed land purchases and excellent project execution. It bought land when prices were low and stopped purchasing as prices went through the roof after 2005. For instance, between 1999 and 2005 it bought 83.88 acres of land in Goregaon, northern Mumbai, at Rs 106.8 crore. The current price is over Rs  20 crore per acre.

Timing is the key, says Oberoi. "When the market is going down, start buying land before it reaches the bottom. When you sell, you shouldn't sell at the absolute peak, but just before that."

The company added huge land reserves even when prices were rising rapidly. Its total land reserve rose to 13,900 acres at the end of March 2008 from 10,600 acre a year before, according to its annual reports.

"Even with enough cash in hand, the best thing Oberoi did was to avoid diversifying into an unrelated sector like Unitech and DB Realty did," says Kejal Mehta, analyst at brokerage Prabhudas Lilladher. Mehta is referring to Unitech's telecom foray in 2008 in a joint venture with Norwegian company Telenor. Unitech - along with several other companies including DB Realty - was later embroiled in allegations of corruption in the allotment of telecom licences. This eventually led the Supreme Court to scrap the permits in early 2 0 1 2 . Unitech Managing Director Sanjay Chandra was among those who were jailed. Unitech has previously denied all allegations of corruption, but declined to comment this time. Chandra is out on bail. The joint venture with Telenor has since been dissolved.

Oberoi Realty scores on several other counts. It has delivered projects in time. It is focusing on the high-end of the market. And it has not taken up too many projects simultaneously - it is developing only five, all in Mumbai. Unitech is executing 78 projects ranging from luxury apartments to low-cost housing projects. "The average execution cycle for Unitech is six years," says Vineet Verma, analyst at Nomura Equity Research. "Many projects it started around 2008 are yet to be delivered."

An important factor that has helped Oberoi Realty finish projects on time is its decision in 1998 to outsource construction work to engineering companies such as Larsen & Toubro. Many other developers, including Unitech, undertake construction on their own. When the market is going down, start buying land before it hits the bottom. When you sell, you shouldn't sell at the absolute peak, but just before that: Vikas Oberoi, CMD, Oberoi Realty
These construction companies, says Vikas Oberoi, offer economies of scale. "Larsen & Toubro, for example, will be doing some billion dollars worth of execution. So when they go to buy steel and cement, they can negotiate better prices," he says. "It also saves our time to concentrate on the core business of real estate development."

It is a piece of advice Unitech will ignore at its own peril.

For many decades, the brand Mercedes, epitomized the ultimate in automobile luxury for Indians - more so, because it could only be procured by importing it at staggering cost. Rivals Audi and BMW were never household names the way Mercedes was. Thus when Mercedes finally made its India entry in 1998, it was expected to effortlessly dominate the luxury car segment. But it did so only briefly. Once rivals Audi and BMW entered the country, both in 2007, it was a different story. BMW overtook it first and still remains No.1, while in April last year, Audi too surged ahead.

Where did Mercedes falter and what can it learn from Audi? The latter seems to have scored on two main counts: innovative pricing for one, and celebrity association and brand management for another. Audi realised that in India even buyers of luxury segment cars care about costs, and has thus provided a wider range than Mercedes. It brought in stripped down versions of its A4 sedan as 'corporate editions' which cost Rs 3 lakh to 5 lakh less than the top-end version. In June last year, it launched the Q3, an entry level SUV, a category Mercedes had been looking at for years but has yet to enter. Indeed, Debashis Mitra, Director, Sales and Marketing, Mercedes-Benz India, once admitted to Business Today that Mercedes lost market share for lack of a complete portfolio of products.

Audi has also introduced a financing scheme stretching over 84 months, instead of the usual 60, thus lowering the equated monthly installment buyers pay. The spike in sales growth as a result has varied between three and five per cent per month. Mercedes in contrast, is said to be offering heavy discounts to push its sales, without much success. "We give attractive financing offers, but no cash discounts," says Michael Perschke, who heads Audi's India operations. Mercedes could well recover if it learns the right lessons, since analysts believe the contest is still open. "Most luxury car buyers are first time buyers and ready to experiment," says Kumar Kandaswami, Senior Director at Deloitte. "The top position is not decided and may change in coming years."

In January, the newly appointed Tata Sons Chairman, Cyrus Mistry, missed an IndiGo flight from Mumbai. The low-cost carrier had the temerity to bar Mistry from boarding the flight because he reached the check-in counter late, says a person familiar with the incident. IndiGo executives refuse to comment, saying only that the airline operates on a strict timetable and that this is precisely what has made it popular among corporate bigwigs such as Wipro Chairman Azim Premji and Bajaj Auto Managing Director Rajiv Bajaj. But it illustrates the obsession with on-time performance that is the most defining characteristic of the country's largest lowcost airline by market share.

No doubt it takes a lot more to run an airline profitably - good customer service, competitive fares, high capacity use, and a tight control on costs - especially at a time when most carriers, including IndiGo's nearest competitor SpiceJet, are deep in the red. IndiGo, based in Gurgaon, scores on all these points. "Our strength lies in on-time performance, low fares and hassle-free service," says President Aditya Ghosh.

Analysts agree. "IndiGo's on-time performance has always been better than that of its competitors," says Rashesh Shah, analyst at ICICI Securities. According to data from the Directorate General of Civil Aviation, IndiGo's on-time performance in November 2012 at six metro airports was 93 per cent. SpiceJet, in comparison, stood at 82.2 per cent. IndiGo's flight cancellation rate was the lowest at 0.3 per cent. SpiceJet canceled 1.3 per cent of its flights. For the same month, IndiGo's average load factor - an industry term to measure aircraft occupancy - was 85 per cent versus SpiceJet's 75 per cent. IndiGo's market share was 27 per cent in December. SpiceJet, headquartered in Chennai, controlled 19.2 per cent. IndiGo's revenue and profit are also higher. 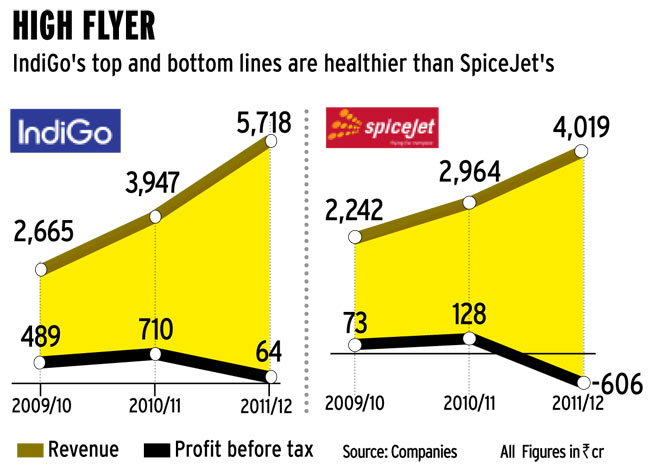 Industry experts credit IndiGo's success to a smart business move made by its promoters Rahul Bhatia and Rakesh Gangwal when the airline had just started. At the 2005 Paris air show, IndiGo placed an order to buy 100 Airbus A320s at a discounted price to be delivered till 2015. IndiGo, which began flying in August 2006, sells these planes to leasing companies as soon as they are delivered and then leases them back. In the process, the airline makes a profit and keeps its books free of debt. Buying a single type of aircraft also keeps maintenance and training costs in check.

SpiceJet has been buying aircraft in small tranches, and of different kinds. The small purchases mean discounts would have been lower, and maintainence and training expenses higher. SpiceJet employs 140 people per aircraft compared with 100 at IndiGo, indicating that the Gurgaon-based carrier utilises its staff more efficiently. All these are areas in which SpiceJet could learn from IndiGo.

SpiceJet too has sale and leaseback arrangements, but its profit from such deals has slumped to Rs 4 crore in the year through March 2012 from Rs 61.7 crore three years earlier. Overall, it posted a net loss of Rs 605.76 crore for 2011/12.

CEO Neil Mills blames the losses on the tough industry environment. "Till about last year, we had one competitor (read Air India) chasing market share at any cost, and another (read Kingfisher Airlines) chasing cash at any cost. Both of them dragged fares down to a level that was unsustainable," he says. "But in the past 12 months, a lot of discipline has come in about pricing fares at a sensible level."

SpiceJet's comeback efforts are showing results. For the quarter ended December 2012, it posted a net profit of Rs 102 crore. But the results could be a blip. "It is to be seen whether SpiceJet can sustain this performance for the next few quarters," cautions ICICI's Shah.