Retail prices of petrol have gone up by Rs 10.78 per litre in this year so far, while diesel prices are up by Rs 11.51 per litre. Centre's excise duty today accounts for Rs 32.90 and states' VAT for another Rs 21.81 for every litre of petrol in Delhi

With petrol prices breaching Rs 100 per litre and diesel also nearing that level, a clamour for a cut in taxes has intensified

A string of 43 hikes this year as compared to just four cuts has seen prices of petrol and diesel break all records in India this year. Petrol prices have now broken the psychological Rs 100 per litre mark in as many as 135 districts in the country, including all the cities in states like Rajasthan, Maharashtra and Madhya Pradesh.

In all, retail prices of petrol have gone up by Rs 10.78 per litre in this year so far, while diesel prices are up by Rs 11.51 per litre. At the start of the calendar year, petrol prices hovered at Rs 84 per litre in Delhi but have risen by 12.5 per cent so far, while diesel prices, which stood at Rs 74 per litre on January 1, 2021, have gone up by 15.4 per cent. It still lags behind the increase in international crude prices (Indian basket), which has gone up over 22 per cent from $54.79 per barrel in January to $ 66.95 per barrel in May. 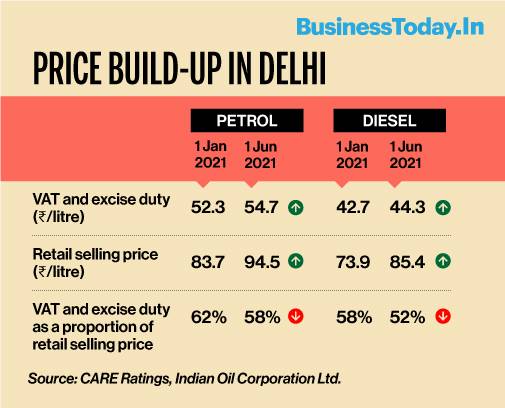 The trend of price hikes was paused in March and April, just after the election dates for five states -- West Bengal, Tamil Nadu, Assam, Kerala and Puducherry -- were announced on February 27. Instead, prices were reduced three times in March and once in April, leading to a fall in petrol prices by Rs 0.61 and 0.16 per litre, respectively, and diesel by Rs 0.60 and Rs 0.14 per litre, respectively. Prices were hiked again in May 16 times, with petrol rising by Rs 3.83 per litre and diesel by Rs 4.42 per litre. On June 1, petrol and diesel saw another hike, amounting to total 43 hikes in just over five months this year. Even with the rise in international crude prices, retail prices in India need not be so high across India. Petrol and diesel that are not part of GST attract excise duties from the Centre and VAT from states that make them one of the highest-taxed commodities in the country. In the last few years, these taxes have been raised on several occasions making the fuels one of the highest taxed in the world. Between FY15 and FY20, for example, excise duties were raised a record 12 times and lowered only twice.

In the summer of 2020, as the country went into a lockdown, the government once again turned to oil to shore up its revenues. Global crude prices turned negative for the first time in the US in April 2020. The price of the Indian basket also declined to a low of just $19.9 per barrel but consumers in India, locked in their homes, never got the benefit of such rock-bottom prices. On May 5, duties on petrol were hiked by Rs 10 per litre and on diesel by Rs 13 per litre. It was the steepest-ever hike in one go in transport fuel in India.

This has bolstered the government's fiscal report card, which has otherwise been undermined by low economic activity. Excise duty revenues jumped over 35 per cent to Rs 3,61,000 crore in 2020/21, against the budgeted estimate of Rs 2,67,000 crore. Part of this was collected through cess under the Central Road and Infrastructure Fund (CRIF), which the Centre does not need to share with states.

In the fiscal year 2021, the Centre had estimated it would pocket Rs 2,31,132 crore, 83.3 per cent higher than its budgetary estimate of Rs 1,26,076 crore, which it had presented in February last year. There was no spectre of coronavirus at that time. For the sake of comparison, in 2019/20, the government had collected a relatively modest Rs 90,252 crore under the CRIF.

With petrol prices breaching Rs 100 per litre and diesel also nearing that level, a clamour for a cut in taxes has intensified. It may have been possible if the economic recovery in the latter half of fiscal 2021 continued in the current year. But the second wave of the pandemic and its likely impact on growth means the government may again be hard-pressed for cash. Already, for 2021/22, it has budgeted an excise revenue of Rs 3,35,000 crore, an over 25 per cent rise over 2020/21.

"This is a vexatious issue in which no answer other than price cut will be able to please the public," Finance Minister Nirmala Sitharaman had said on February 20. "It is a question which I would like states and the Centre to talk about because it's not just the Centre that has duties on petroleum products, it also has the states charging. So, there is an issue that is layered and as a result that has to be a matter ideally for the Centre and the states to talk about."

Also read: Fuel demand plunges in May due to COVID-19 lockdowns, shows data