The government has given in-principle approval for strategic disinvestments of 23 CPSEs including subsidiaries, units and joint ventures with majority stake sale of the government and transfer of the management control

CPSEs put up for strategic disinvestment in 2019-20 include three subsidiaries and two joint ventures.
Niti Kiran

The Union government hopes to garner Rs 1.05 lakh crore from disinvestments in the current financial year, an increase of 31 per cent over the last year's target. Moving ahead with this plan, it has given in-principle approval for strategic disinvestments of 23 CPSEs including subsidiaries, units and joint ventures with majority stake sale of the government and transfer of the management control.

During Prime Minister Narendra Modi-led government's first term between 2014 and 2019, only last two years saw strategic disinvestments of five PSUs namely HPCL, REC, NPCC, HSCC and DCIL, earning Rs 52,829 crore. In 2017/18, the HPCL-ONGC deal alone raised Rs 36,915 crore, which accounted for nearly 37 per cent of the total disinvestment proceeds during that year. Proceeds from remaining four CPSEs in the next fiscal year contributed around 19 per cent to the total disinvestment amount of Rs 84,972 crore in 2018/19. 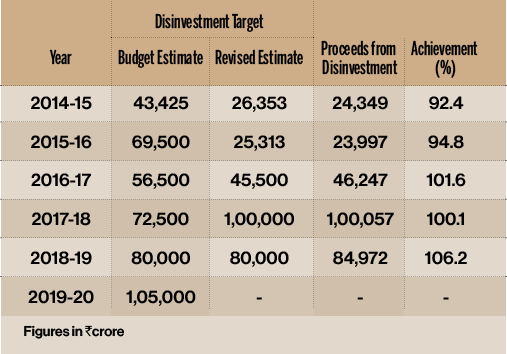 "Strategic disinvestment has been guided by the basic economic principle that the government should not be in the business to engage itself in manufacturing/producing goods and services in sectors where competitive markets have come of age, and economic potential of such entities may be better discovered in the hands of the strategic investors due to various factors, e.g. infusion of capital, technology up-gradation and efficient management practices. In addition, the government would also be able to monetise its investment in CPSEs," the Finance Ministry said in the Parliament on Monday.

The government did not consider profitability as a criteria for strategic disinvestment over the last two years. Of five CPSEs whose strategic disinvestment was successfully completed, three are listed entities. All of them were profitable for the last five years, as per the latest data available. CPSEs for which the government has given in-principle approval for strategic disinvestment in 2019/20 include three subsidiaries and two joint ventures. Air India and its five subsidiaries and one joint venture are also a part of this list. Four of these entities are listed on bourses too. Based on the latest financial information available (in some cases, financial data was dated even before 2015) for 18 companies on the list, seven entities are loss-making with an aggregate loss of Rs 5,481 crore, with Air India accounting for lion's share of 97 per cent. Companies such as Air India, Bharat Pumps and Compressors, Hindustan Fluorocarbons, Hindustan Newsprint and Projects and Development India have been in losses for over three years. The overall debt of 13 companies (whose latest data for FY18 was available) rose to Rs 56,490 crore in FY18 from Rs 49,892 crore in FY17. Air India contributed 98 per cent to the total debt in FY18. . The proceeds from strategic sale will depend on various factors including prevailing market conditions at the time of actual sale.