Chandrayaan 2: NASA says it was dusk when the landing area was imaged by its Lunar Reconnaissance Orbiter Camera, and thus large shadows covered much of the terrain; it is possible that the Vikram lander is hiding in a shadow, adds the space agency

Chandrayaan 2: NASA says it will try to locate and image the Vikram lander again when the lighting will be favourable.

The United States' premier space agency NASA (National Aeronautics and Space Administration) has said the Chandrayaan-2's Vikram lander had a "hard landing" on the Moon's surface. While releasing high-resolution images captured by its Lunar Reconnaissance Orbiter Camera (LROC) during a lunar flyby, the agency said the Vikram lander attempted a soft landing on a small patch of lunar highland smooth plains between "Simpelius N and Manzinus C craters" on September 7 before it lost contact with the Indian Space Research Organisation (ISRO). The agency, however, could not verify the exact location of the spacecraft. The images captured by LROC also do not pinpoint Chandrayaan 2 Vikram lander's location but it is possible that it "is hiding in shadow," said NASA. "The precise location of the spacecraft in the lunar highlands has yet to be determined. The scene above was captured from a Lunar Reconnaissance Orbiter Camera (LROC) Quickmap fly-around of the targeted landing site image width is about 150 kilometres across the centre," NASA said in a statement.

Our @LRO_NASA mission imaged the targeted landing site of Indias Chandrayaan-2 lander, Vikram. The images were taken at dusk, and the team was not able to locate the lander. More images will be taken in October during a flyby in favorable lighting. More: https://t.co/1bMVGRKslp pic.twitter.com/kqTp3GkwuM 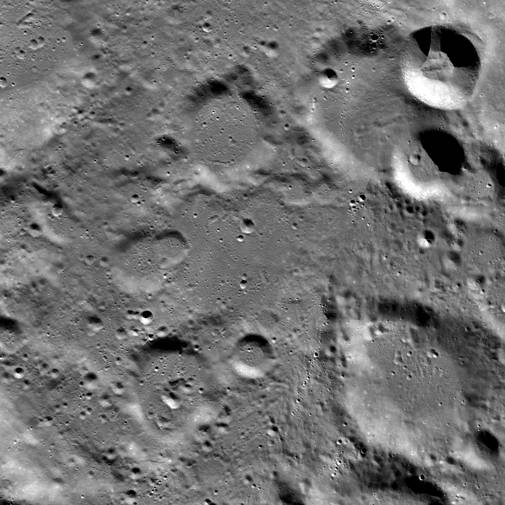 A view looking down on the Vikram landing site (image acquired before the landing attempt). Credits: NASA/Goddard/Arizona State University

"NASA's Lunar Reconnaissance Orbiter (LRO) passed over the landing site on September 17 and acquired a set of high-resolution images of the area; so far the LROC team has not been able to locate or image the lander. It was dusk when the landing area was imaged and thus large shadows covered much of the terrain; it is possible that the Vikram lander is hiding in a shadow," NASA said.

The space agency said the lighting would be favourable again when its LRO would pass over the site in October. It said the LRO would again attempt to "locate and image the lander".

ISRO chief K Sivan on Thursday said the Chandrayaan 2 orbiter was doing well but there had been no communication from lander Vikram. He added that a national-level committee was analysing what went wrong with the lander. Sivan added that once the committees submit their report, the space agency will work on a plan.

"Chandrayaan 2 orbiter is doing very well. All payload operations have commenced, it's doing extremely well. We have got no signal from lander but orbiter is working very well. A national-level committee is now analysing what went wrong with the lander," he said to news agency ANI. Vikram lander lost communication with the orbiter on September 7, moments before it was scheduled to land on the moon. Following days of silence from the other end, US space agency NASA had also joined the efforts to establish communication with lander Vikram. Out of the 38 global attempts of 'soft landing' on the lunar surface, only 20 have been successful. Just five months back, Israel's attempt crash-landed on the moon.