The output of eight core infrastructure sectors contracted by 2.5 per cent in October
BusinessToday.In

Contracting for the eight consecutive month, the output of eight core infrastructure sectors declined by 2.5 per cent in October, due to decline in production of crude oil, natural gas, refinery products and steel.

The production of eight core sectors had contracted 0.1 per cent in September 2020, as per the data released by the Commerce and Industry Ministry on Friday.

The cumulative growth during April to October 2020-21 contracted by 13 per cent. 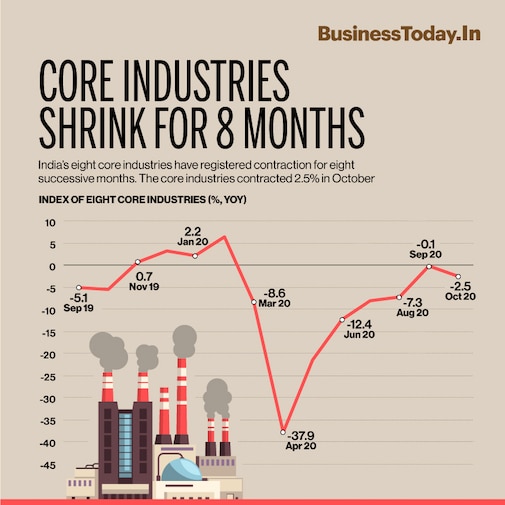 The output of crude oil, natural gas, refinery products and steel fell by 6.2 per cent, 8.6 per cent, 17 per cent and 2.7 per cent, respectively.

In contrast, the coal production grew by 11.6 per cent during the month under review compared to the same period last year. The output of fertilizers, cement and electricity grew by 6.3 per cent, 2.8 per cent and 10.5 per cent, respectively, compared to October 2019.

Final growth rate of index of eight core industries for July 2020 has been revised to (-) 7.6 per cent.