As per the World Gold Council's data, India has 618.2 tonnes of gold as holdings, which is 6.9 per cent of the share held in gold in total foreign reserves

While panic recently gripped the already slowed down Indian economy following media reports on India selling its gold reserves, the country has the 10th largest gold reserves in the world, revealed data released on Friday on the world official gold holdings.

As per the World Gold Council's (WGC) data, India has 618.2 tonnes of the yellow metal as holdings, which is 6.9 per cent of the share held in gold in total foreign reserves. United States (US) has the largest holding with 8133.5 tonnes, followed by Germany with 3366 tonnes and the International Monetary Fund (IMF) with 2814 tonnes.

Other countries having more gold holdings than India is Italy with 2451.8 tonnes, France with 2436 tonnes, Russian Federation with 2241.9 tonnes, China: PR Mainland with 1948.3 tonnes, Switzerland with 1040 tonnes and Japan with 765.2 tonnes. World Gold Council is an independent agency tracking and analyzing gold trade globally at the wholesale level. 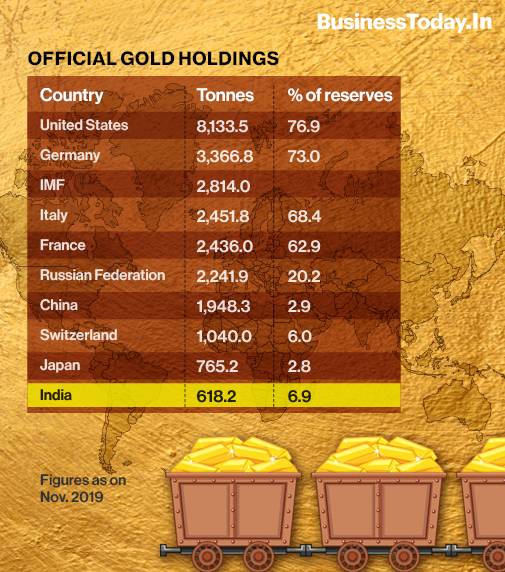 While panic gripped the markets on gold sale news by the Central Bank, RBI denied the gold sale news in a tweet on October 27. "Reports have appeared in certain sections of media that RBI has been selling/ trading in gold of late. It is clarified that RBI has not sold any gold or trading in it". The fluctuation in value depicted in the Weekly Statistical Supplement is due to change in frequency of revaluation from monthly to weekly basis and is based on international prices of gold and exchange rates, the bank clarified.

The central bank's gold reserves are valued at about $27 billion as of October 18. India's Central bank had purchased about 200 tonnes of gold from the IMF in 2009 and that was the biggest purchase when the IMF decided to sell 403.3 tonnes or one-third of its reserves.

Globally, 34,490.44 tonnes of gold is held as reserves and of this, 10776.1 tonnes are in the Euro area and 11437.1 tonnes in the Central Bank Gold Agreement (CBGA) signatory countries, covering gold sales by Eurosystem Central Banks, Sweden and Switzerland.

Also read: Have not sold any gold; change in revaluation frequency behind reserve fluctuation: RBI

Also read: Govt has tried to get gold holdings disclosed before, but not succeeded