Kashmir issue: Pakistan's embargo on trade with India comes at a time when Pakistan's economy is on life support from China, Saudi Arabia, UAE and bodies like the International Monetary Fund

Jammu and Kashmir issue: India has decided to maintain status quo on the suspension of trade with Pakistan.
Manoj Sharma/Mudit Kapoor

Pakistan's decision to downgrade bilateral trade and diplomatic ties with India in response to the revocation of Article 370 in Jammu and Kashmir makes no dent on the Indian economy. Instead, it's going to hurt Pakistan's crumbling economy. The reason is simple - Pakistan is way down in the list of India's trade partners: 48th to be precise. On the contrary, India ranks 6th in the list of its major importing partner countries as per Pakistan's ecomonic survey FY19. 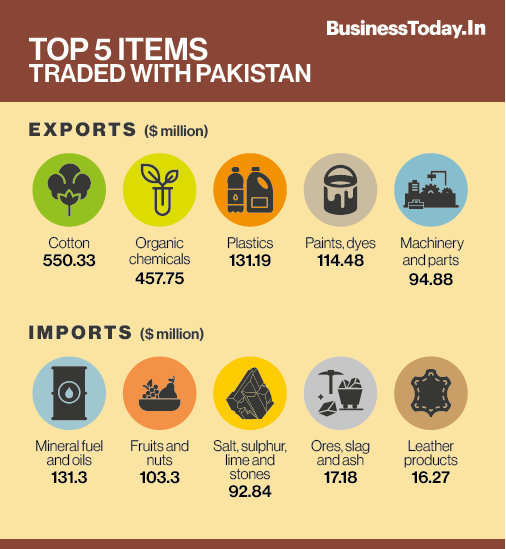 Compared with India's trade with countries like the United States and China, this is insignificant. India's trade with the United States stood highest at $87.96 billion in 2018-19, while neighbouring China's trade was recorded at $87.07 billion. India depends heavily on both the countries for both export and import. In 2018-19, India exported items worth $52.41 billion to the US, while its import stood at $35.55 billion. India's trade balance with China is also huge -- it exported items worth $16.75 billion and its import with China stood at $70.32 billion in 2018-19. 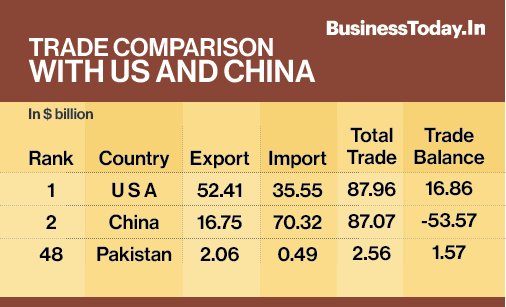 Along with the US and China, countries like UAE, Saudi Arabia, Hong Kong, Singapore, Iraq, Germany, South Korea, and Indonesia accounted for 49.62 per cent of India's trade (45.47 per cent exports and 52.29 per cent imports).

Pakistan's embargo on trade with India comes at a time when Pakistan's economy is on life support from China, Saudi Arabia, UAE and bodies like the International Monetary Fund. For  Pakistan PM Imran Khan's desperate attempt to sell buffaloes and luxury cars in 2018, escalating trade tensions with India is the least the country can afford right now. 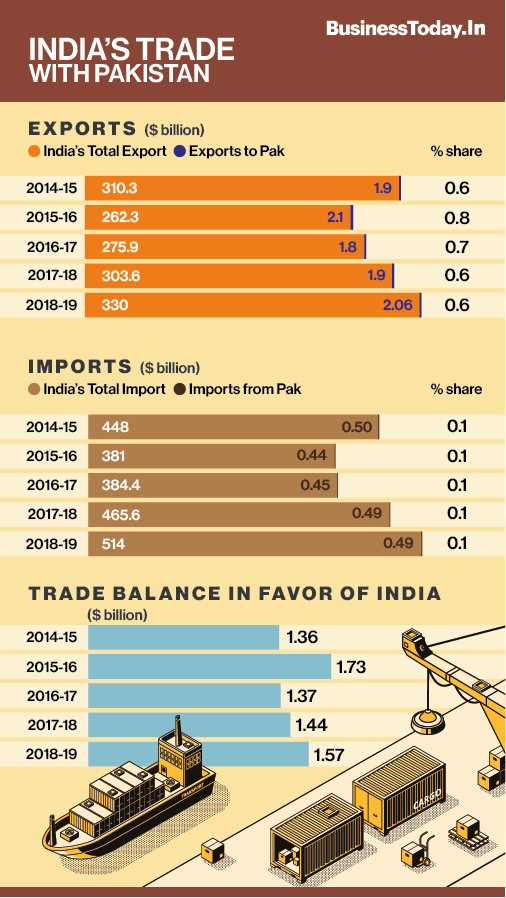 To those curious - yes, Pakistan has sold buffaloes to fill state coffers. Imran Khan's government sold eight buffaloes kept by his predecessor Nawaz Sharif at the Prime Minister's house as part of the austerity measures after coming to power.

Pakistan's foreign reserves stand at just $7.76 billion, even lower than Bangladesh's forex reserves worth $32 billion. Pakistan's GDP forecast has also been revised downward to 4 per cent. Pakistan's inflation stood at 8.9 per cent in June 2019.

Standard & Poor's this year lowered its credit rating to B- (speculative), six steps below the investment grade AAA rating. This makes it prohibitively expensive for Pakistan to raise capital in the overseas bond market.

Meanwhile, India remains unfazed as Pakistan downgraded ties on Wednesday. Reports say India will maintain status quo on the suspension of trade with Pakistan, which was put in force in February after the Pulwama terror attack that left 44 CRPF jawans dead. India had also withdrawn Most Favoured Nation (MFN) status for Pakistan and hiked import duties by 200 per cent.