The tweets, which have since been taken down, asked followers to donate to the PM National Relief Fund through cryptocurrency

A Twitter account of Prime Minister Narendra Modi's personal website was hacked early Thursday with a series of cryptic tweets being posted on the account by a group claiming to be John Wick. The account has since been restored. Confirming the same, Twitter said that it was aware of the activity and has taken the required steps to secure the compromised account. It added that it is "actively investigating" the situation.The account which goes by the handle narendramodi_in, was reportedly hacked at around 3:15 AM on Thursday.

The tweets, which have since been taken down, asked followers to donate to the PM National Relief Fund through cryptocurrency.

"Yes this account is hacked by John Wick (hckindia@tutanota.com), We have not hacked Paytm Mall," read one of the tweets posted on the account.

"I appeal to you all to donate generously to PM National Relief Fund for Covid-19, Now India begin with crypto currency, Kindly Donate eth to 0xae073DB1e5752faFF169B1ede7E8E94bF7f80Be6," read another tweet. 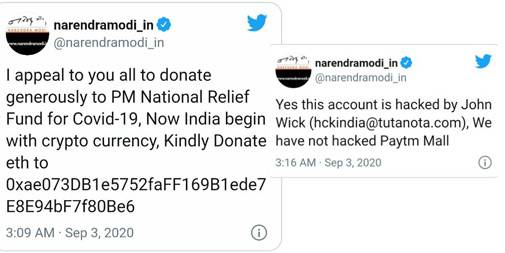 Following this, social media was flooded with hilarious memes and jokes.