Direct tax leakages happen in both categories of taxpayers. This is very well-known to the policymakers and law enforcers but not the ordinary citizens. Here is, therefore, an attempt to highlight such leakages.

A simple comparison of the data on corporate entities actually filing tax returns every year - released by the Income Tax Department (ITD) - and the number of "active companies" - as disclosed by the Registrar of Companies (RoC) under the Ministry of Corporate Affairs (MCA) - would reveal the gap between those who are filing returns, paying taxes and those who don't.

"Active companies" are indirectly defined by the MCA: Total number of registered companies in a particular year minus those that are closed, dormant, in-active or under the process of closure in that year. Thus, these are the companies carrying out normal business activities and are required to file tax returns as per the Income Tax Act - irrespective of whether they are making profit or not.

The comparison of the two sets of data shows a large number of companies are not filing their returns - as reproduced below. The gap has remained high for years. A downward trend is visible in the gap post-FY17, which is a positive sign but so is the case with the number of active companies - a cause of serious concern which may indicate a slowdown in the economy. 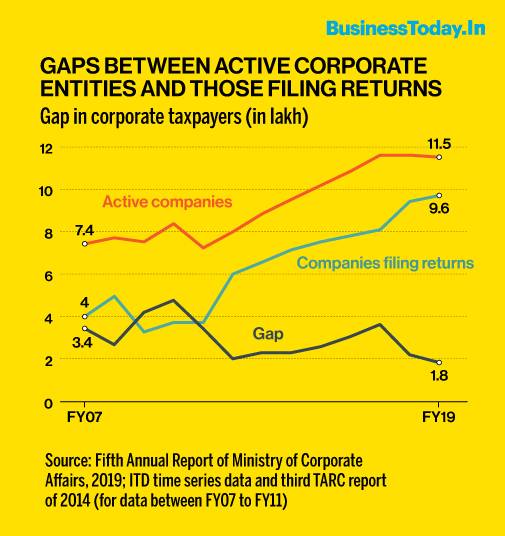 This is not something new or a discovery, but has always been known to the authorities.

The third report of the Tax Administration Reform Commission (TARC) of 2014 pointed it out too and expressed its disapproval. More recently, the Comptroller and Auditor General of India (CAG) report of 2019 highlighted this gap and commented that "ensuring compliance (tax) by identifying non-filers has not been effective". There is yet another aspect of the corporate tax regime.

About 61% of companies contributed "disproportionately lower amount of taxes in relation to their profits" in FY19 - said the 'revenue impact of tax incentives' statement of the Budget 2020-21 reproduced below.

The larger profit-making companies contribute relatively less because the effective tax rate is lower on them than the smaller profit-making ones since the larger ones benefit from more tax incentives and deductions - as the budget documents have been pointing out for years. Business Today detailed this in an earlier article.

The gap in individual taxpayers is not as easy to detect since the income tax authorities don't reveal the complete set of data on individual taxpayers. Therefore, reliance is placed on anecdotal evidence and bits and pieces of data that filtered out in the past few years.

The first one in recent times to draw attention to it was the former Finance Minister Arun Jaitley.

In his Budget 2018-19 speech Jaitley made two big points: (ii) The presumptive income scheme (PIS) for individual businesses and professionals, which was meant to improve tax compliance, had a little impact on actual tax collection even though the number of tax filers went up - "as turnover shown is still not encouraging", said Jaitley. In absence of such data in the public domain, long-term trend can't be mapped. 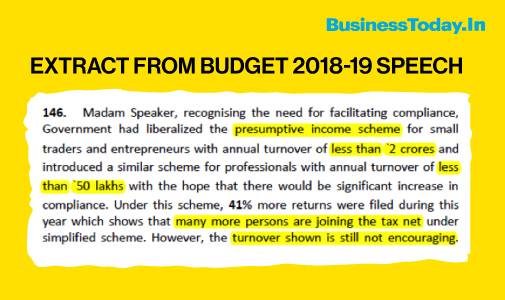 The third TARC report of 2014 did explain this phenomenon (higher presumptive tax filers but little actual gain in tax). It observed that the individuals and firms large enough to pay tax evaded it by opting for presumptive tax in place of regular tax "to appear being in the tax net yet not show their actual income or turnover".

Presumptive income scheme (PIS) is meant to provide relief to small traders and entrepreneurs with an annual turnover of up to Rs 2 crore and for professionals up to Rs 50 lakh. Such individuals pay tax at the presumptive rate of 6-8% on self-declared income and no further expenses would be allowed or disallowed, though they can claim certain deductions under chapter VIA of the Income Tax Act (exemptions relating to tax-saving investments like pensions, provident fund, life insurance premium or other market-linked tax-saving instruments). Such individuals are not required to maintain books of accounts - which means their declarations are good enough for compliance purpose.

Analysis of the ITD's direct tax data makes for an interesting study.

A map of the growth rates in net direct tax and nominal GDP is presented below. What is obvious from this graph is that the growth in direct tax shows two distinct patterns - (a) pre-FY09 phase when it is mostly higher than that of the nominal GDP and (b) post-FY09 when both move in close proximity.

Could the post-FY09 phase behaviour be due to higher tax incentives in the post-global financial crisis period of 2007-08? Or is it due to higher tax leakages? Could it be because of an exaggerated growth rate in GDP? Getting a definitive answer to this would require a rigorous investigation. A declining tax buoyancy factor would mean a weak response to the growth in GDP which is something to worry about.

The tax authorities have a Non-filers Monitoring System (NIS) to identify potential tax evaders. They do this through data mining and data analysis - using data available from various sources such as annual information return (AIR), centralised information branch (CIB) and TDS/TCS statements etc. Such information is not available to the public.

In 2019, a national daily quoted tax authorities as saying that the NMS had identified 20.4 million cases of 'non-filers' between 2013 and 2017, of which 2.5 million were of 'dropped filers' - those who had stopped filing returns.

In 2016, another national daily had quoted the tax authorities as saying that they had identified an additional 6.7 million potential non-filers who carried out high-value transactions in 2014-15 but did not file return of income. All these data would show, the number of tax evaders being identified by the tax authorities is growing over the years - not declining.

The CAG report of 2019 - the relevant part of which was reproduced earlier in this article - did point to this in the context of corporate non-filers and commented that "ensuring (tax) compliance by identifying non-filers has not been effective".

Three conclusions could be drawn from the above analysis.

One, the tax authorities are well aware of the leakage in direct tax.

Two, potential tax evaders - non-filers and dropped filers - are routinely identified by the tax authorities through their monitoring system in place. The numbers of such tax evaders are very high and growing over the years.

Three, what is missing is the follow-up action by the tax authorities.

The road ahead is, therefore, quite clear.