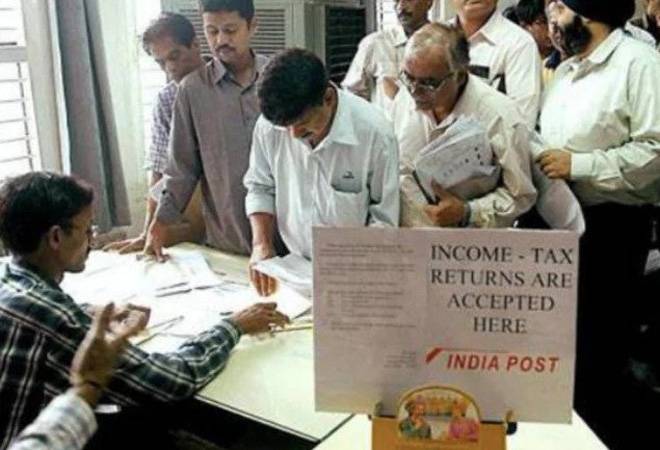 A recent statement of the Prime Minister Narendra Modi brought the focus back on shortcomings in India's taxation system. Some of the facts were not only revealing (not in public domain until then) but shocking too. Two of them stood out: (a) only 1.5 crore people pay income tax and (b) only a little over 3 lakh disclose annual income of more than Rs 50 lakh.

A closer scrutiny of relevant tax data shows there is indeed much to worry about the existing taxation system, starting with its very structure which seems heavily tilted in favour of those with higher income.

Following the Prime Minister's statement the income tax authorities revealed a few facts through a series of tweets on February 13.

The tweet relevant for the current purpose is reproduced below.

These numbers look like small changes compared to what is widely known.

Here is an extract from the Global Wealth Report to remove all doubts. 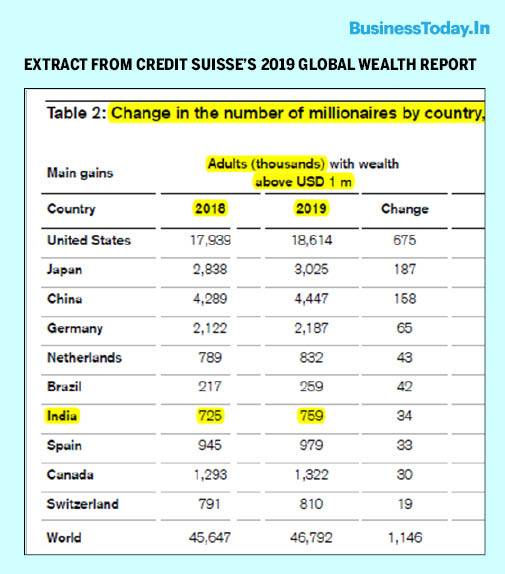 This is not the first time that such a discrepancy is revealed.

The third report of the Tax Administration Reform Commission (TARC) released in 2014 had emphasised on this point too. It said The Wall Street Journal had revealed in 2013 that India had 1.25 lakh dollar millionaires. The same year the Finance Ministry proposed a 10% surcharge on those who had declared annual income of at least Rs 1 crore (about $176,000 then). The ministry had also pointed out that there were only 43,000 such individuals "despite the fact that the number of millionaires is believed to be at least 3 times that".

There is another reason why the tax arrangements of individuals in higher income bracket should be looked at more carefully.

The same TARC report had warned that such individuals (it called them high net-worth individuals or HNWIs) may not be less tax compliant "but the scale and complexity of their personal and business tax arrangements need to be reviewed more effectively to examine their tax affairs".

It said many HNWIs used HUFs (Hindu Undivided Families) to spread their income and fall under the threshold to save tax. They were also known to launder money or receive gifts from abroad. The relevant observation is reproduced below.

An attempt in the Budget 2019-20 to increase surcharge by 10% on individuals with taxable income between Rs 2-5 crore and above was later withdrawn.

All this, however, should not distract from the fact that individual taxpayers, rather than corporate entities, have been bearing a heavier direct tax burden in India.

An analysis of the budget statements of 'revenue impact of tax incentives' - earlier called statement of 'revenue foregone' - reveals that corporate entities are benefitting far more from tax incentives and deductions given under the direct tax regime as compared to personal income taxpayers (individual/HUF). What a higher percentage of revenue foregone for corporate means is that the tax burden is far higher on smaller taxpayers (individual/HUF) - while prudence demands an equitable system in which those with higher capacity to pay contribute more to the exchequer.

This is, again, not something new or unknown.

An earlier assessment of revenue foregone in 2013 by the National Institute of Public Finance and Policy (NIPFP) - a finance ministry research body - had observed the trend and said: "It is tempting to conclude that the tax burden seems to be shifting to the small taxpayers".

This study analysed data from FY05 to FY13 after the practice of disclosing revenue foregone was started in the Budget of 2006-07 to bring greater transparency into the budget-making exercise.

In absolute terms, however, revenue foregone in personal income tax has closed the gap, surpassing corporate entities in FY20 (estimated) - as mapped in the graph below. But this estimate was made on the "basis of the tax expenditure figures of the financial year 2018-19", the budget document discloses and thus, does not take into account the corporate tax cuts to the tune of Rs 1.45 lakh crore announced in September 2019. Next year's budget is likely to provide a clearer picture. 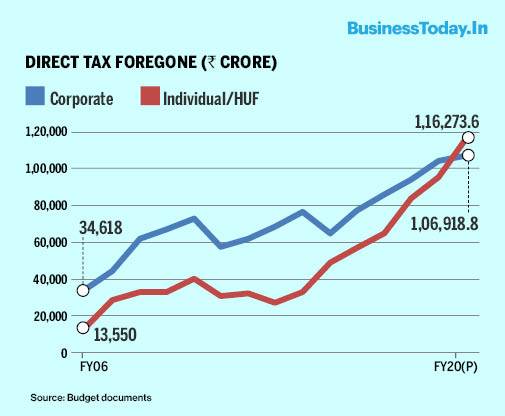 A similar trend is witnessed when direct tax foregone for corporate entities is analysed.

The budget documents have been, for several years, pointing out that smaller players (a) pay higher "effective tax rate" - the ratio of total taxes (including surcharge and education cess but excluding dividend distribution tax) to the total profits before taxes (PBT) expressed in percentage - and (b) they have a higher ratio of total income to PBT.

What both of these means is that "larger companies are availing higher deductions and incentives as compared to smaller companies", explains the Budget 2020-21.

Here is, for illustration purpose, a comparative state of effective tax rates and total income-to-PBT ratios for the previous four financial years.

The comparison is between corporates with Rs 10-50 crore of profit before tax (PBT) and those with that of more than Rs 500 crore - a comparison that the budget documents have been making for years. 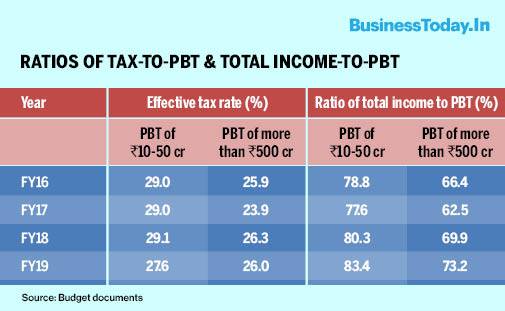 These are not the only discordant notes in the Indian tax system.

India abolished the wealth tax in the Budget 2015-16 - which was introduced in 1957 to reduce wealth inequality - on the plea that the cost of collecting it was more than the benefits derived. The same logic has been forwarded to not tax the agricultural income too.

The wealth tax was replaced by a 2% surcharge on the super-rich with taxable income of more than Rs 1 crore. 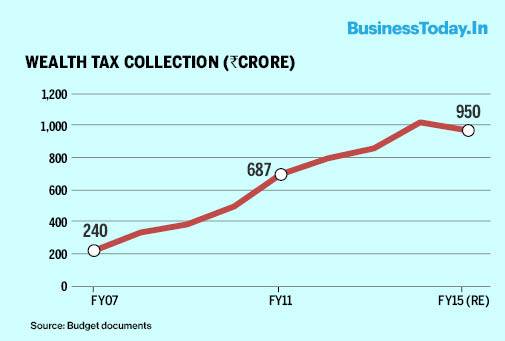 The change came months after the French economist Thomas Piketty published his historical study on inequality, Capital in the Twenty-First Century, that sparked a global debate on the issue. He highlighted how income has concentrated in the hands of a few, warned against its adverse consequences and proposed progressive wealth taxes to address the growing income inequality.

In absence of comparable data or studies in India it is not possible to know how the move to replace the wealth tax with a surcharge has worked.

But the ground realities have changed significantly since then, warranting a relook at it.

In 2017, Piketty and colleague Lucas Chancel published their study on income inequality in India, 'Indian Income Inequality, 1922-2015: From British Raj to Billionaire Raj?' It showed income inequality had worsened in the post-liberalised era and sought wealth tax and other redistributive measures to reverse it.

The Indian government's own studies have subsequently confirmed the worsening of financial well-being.

A few months earlier, the periodic labour force survey (PLFS) of the NSSO for 2017-18 had shown that the unemployment rate had touched a 45-year-high at 6.1%. Since then the rate has been climbing - it was 7.6% in December 2019 as per the Centre for Monitoring Indian Economy (CMIE).

Then came another shocker.

In December 2019, the government's principal think tank Niti Aayog published its SDG Index 2019 report showing that poverty, hunger and income inequality had gone up in 22, 24 and 25 states/UTs, respectively, out of 28 states/UTs that it mapped in 2019 - after having set a benchmark for such measurements in 2018.

For the last time, in September 2018, the 'Global Multidimensional Poverty Index 2018' of the UNDP-Oxford University had praised India for an extraordinary progress in reducing multidimensional poor by 271 million in a decade between 2005-06 and 2015-16. (In 2019, their report repeated the same claim.)

The issues highlighted so far call for an urgent and honest evaluation of the existing taxation structure in India and address anomalies to ensure equity in taxation by shifting the burden to those who have more capacity to pay - not less.

In that sense the government's recent move towards a new tax regime without incentives and deductions - as was the case with the 2019 corporate tax cut and new income tax rates for individuals proposed in the Budget 2020-21 - may be a move in the right direction.

But inversing the current tax structure and preventing leakages calls for more than an ad hoc approach to the policymaking. It calls for deliberations in and outside the government and public debates.