This is how Bharti Airtel can recharge its investors

Airtel is examining the option of a rights issue to existing shareholders or a private placement to institutional investors and promoters.

Telecom major Bharti Airtel, according to media reports, plans to raise Rs 12,000-15,000 crore by issuing fresh shares in fiscal year (FY) 2018/19. According to sources, it is examining the option of a rights issue to existing shareholders or a private placement to institutional investors and promoters.

Rival Reliance Jio Infocomm holds 43.83 per cent market share with 215.26 million subscribers followed by Bharti Airtel with 124.22 million wireless internet subscribers at the quarter end (QE) Jun-18. The company has seen a growth of 22.5 per cent in its subscriber base compared to Reliance Jio's 74.5 per cent, between QE June 2018 over QE June 2017.

The Sunil Mittal company reportedly is building its strategy to grow its war chest of about Rs 30,000 crore in three tranches to meet its capital expenditure. Earlier this year, the company had pegged capex at Rs 24,000-26,000 crore for FY19. In the last two fiscals, its capital expenditure stood at Rs 26,817 crore and Rs 19,874 crore, respectively. It remains to be seen as to which fundraising option the company would zero in on, but of late, the market has welcomed such offers. Talking of rights issue, it is a tool for a listed company wherein it can raise additional capital by giving its existing shareholders the right to subscribe to newly issued shares in proportion to their existing holdings.

These new shares are usually priced less than the prevailing market price.  Data collated from Prime database reveals fiscal year 2018 saw the highest amount, Rs 21,400 crore, raised through 21 rights issue over a decade. The current fiscal has seen four issues raising Rs 1,693 till November 2018. There are some more in the pipeline -- five rights issue -- where SEBI approval was received with an estimated amount of Rs 296.5 crore. Another six such issues with an estimated amount of Rs 281.9 crore awaits the regulator's approval. 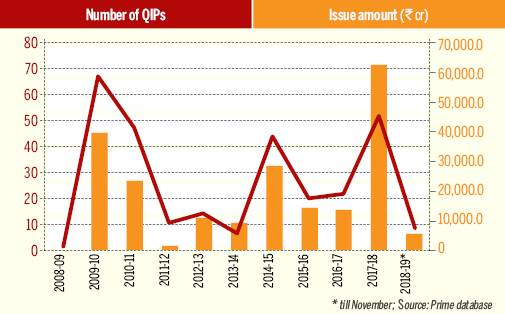 On the other hand, Qualified Institutional Placement (QIP), which is a fund raising instrument for the listed companies through the issue of securities to qualified institutional buyers, again saw an increased participation from the institutional players during the last fiscal year with 52 QIPs garnering Rs 62,520, the highest in last ten years. Of these, 10 QIPs were floated by banks. FY2018/19 has seen 9 QIPs raising an amount of over Rs 5,000 crore. There are over 150 QIPs in the offing.

Let's see if Airtel can recharge its investors if it exercises these options.