Ban on single-use plastic by July 1, is India Inc ready?

Currently, PET bottles that are used to package water do not fall under this category.
Milan Sharma

The government is all set to implement the ban on single-use plastic from July 1. Prime Minister Narendra Modi spoke about India’s move in this direction from the ramparts of the Lal Quila on January 26, 2019. Thereafter, in a notification that was issued on August 12, 2021, the government prohibits the manufacture, import, stocking, distribution, sale, and use of all identified single-use plastic items, which have low utility and high littering potential with effect from July 1, 2022.

Currently, PET bottles that are used to package water do not fall under this category. 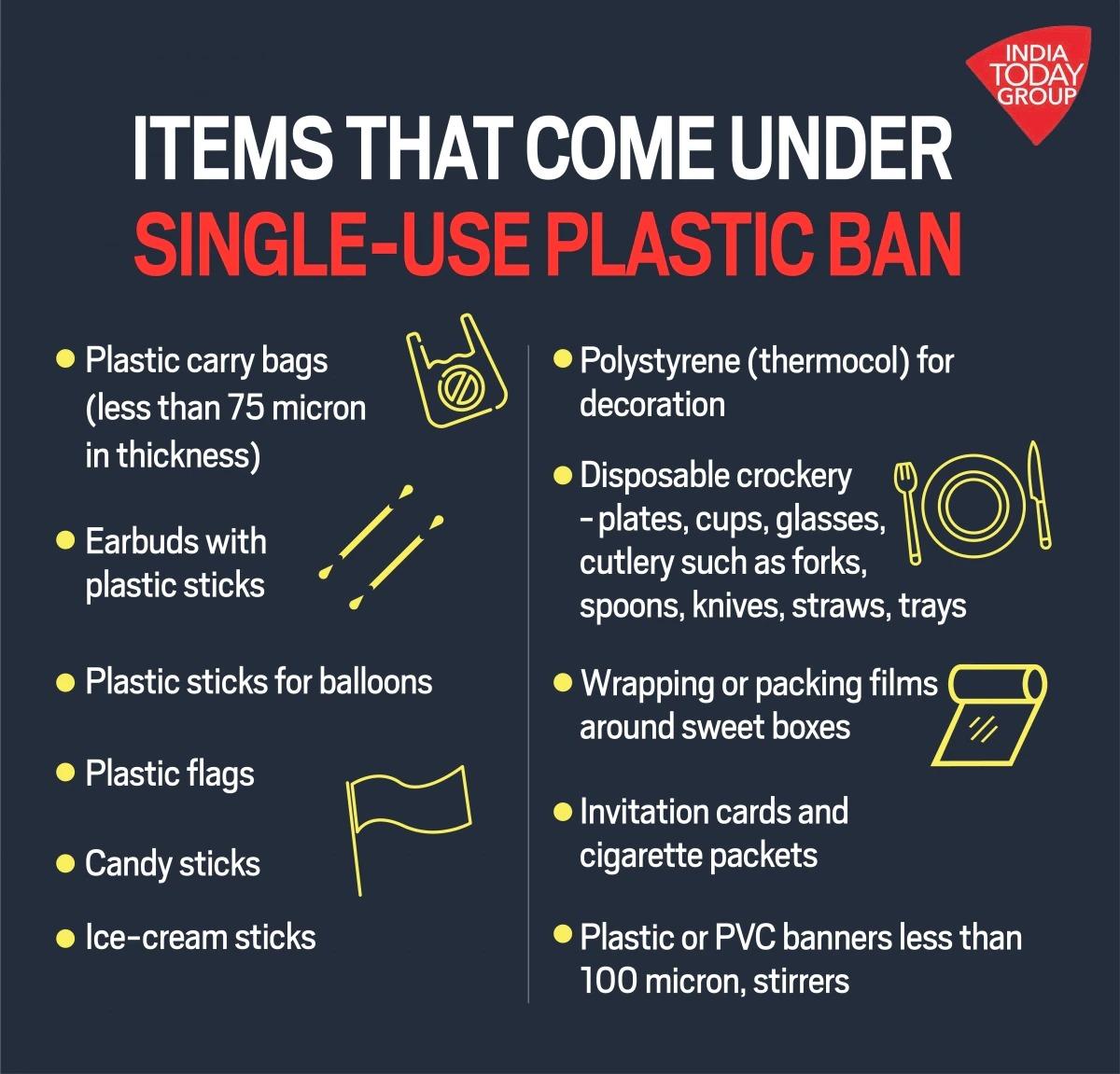 The ministry is looking at a three-pronged strategy for banning single-use plastic in India:

2. Low utility - These are plastic products that have the least amount of usage or utility after being used. For instance, wrapping plastic sheets is hardly utilised after the packaging is opened.

3. Availability of alternative - If other alternatives can be used in their place. For instance, paper bags, paper wrappings (which can be made from recycled material), bamboo spoons instead of plastic spoons, etc.

Sunita Narain, director general, Centre for Science and Environment, says the way ahead is to ensure that plastic items are recycled or disposed of safely. “For this, we need a three-pronged strategy,” she adds. “Firstly, all the plastic produced and used should be collected for disposal. Secondly, the waste plastic must be recycled or incinerated; it should not reach landfills or choke our waterbodies. Thirdly, the reuse or disposal has to be in a manner that is environmentally friendly and does not end up creating more pollution or health hazards. But most importantly, those plastic items that are difficult to collect or recycle should be eliminated from use. This is where the current ban, however limited, fits in.”

IS THE INDUSTRY READY TO COMPLY WITH SINGLE-USE PLASTIC BAN?

While the government agencies seem ready to bring in enforcement, is the industry ready to change?

The Confederation of All India Traders ( CAIT) has sent a communique to Union environment Minister Bhupendra Yadav to extend the last date of imposition of the ban on single-use plastic to one year from July 1, 2022, but has also urged to constitute a joint committee of senior government officials and representatives of stakeholder with a time-bound mandate of suggesting equitable alternatives to single-use plastic so that without any disruption, the country stop using single-use plastic.

The letter is the outcome of deliberations held on this critical issue by more than 100 trade leaders from all states of the country at a two-day national conference of CAIT being held at Nagpur in Maharashtra.

CAIT National President B C Bhartia & Secretary General Praveen Khandelwal said that "undoubtedly the pollution of the environment is a big threat to human civilisation and corrective steps are much needed to protect the environment. However, before any imposition of the ban, it is all the more necessary to keep equivalent alternatives ready to shift the usage."

Environmental researchers state that the current list of banned items does not include multi-layered packaging (MLP). CSE researchers point out that MLP is used in almost all fast-moving consumer goods, from chips to shampoos to gutka pouches.

The government says that all packaging material has been included as part of the extended producer responsibility (EPR) notification. Under this, the companies that manufacture or consume this material are required to take it back and send it for reprocessing. Annual targets have been fixed for companies on how much is to be recollected.

Narain points out that while this “sounds good on paper, there are huge problems in the way EPR has been designed or is being implemented. For instance, there is no information on the quantity of this plastic material or the waste the company generates. Not only is it based on self-declaration, but there is nothing available in the public domain to assess its accuracy. This means the target that has been set for each company is meaningless”.

Worse, says Narain, under EPR, “companies are required to recycle or reprocess the material they collect only by 2024. The question, then, is what is happening to the plastic waste that is being collected -- is it being stored or dumped?”

LOSS OF LIVELIHOODS IN INDIA

CAIT said that it should not be forgotten that, over a longer period, single-use plastic has emerged as a much bigger industry giving employment to lakhs of people in the country and having an annual turnover of more than Rs 60 thousand crores. Banks and financial institutions have a great stake in the single-use plastic industry and a situation of a complete ban without providing any equitable alternative will cause massive destruction in the working vertical of retail trade in India.

“Since traders are the first connection point for the consumers and the public, they will have to face the consequences, though the traders selling the products are acting merely as a component of the supply chain, making things available to the public. However, 98 per cent of single-use plastic is used by MNCs, Corporate Manufacturers, producers, e-commerce companies, warehousing hubs, industry and other types of production units either in their production line or packaging of finished goods,” said the CAIT communique to the environment minister.

“The traders are under compulsion to sell goods in whatever pack they receive from the manufacturer or source of origin. Unless and until these companies and manufacturing units are not compelled to stop the use of single-use plastic either in the production line or in the packing of finished goods, there will always be an occasion for the usage of single-use plastic at the consumer end,” it said.

WHICH NATIONS HAVE BANNED SINGLE-USE PLASTIC?

As of July 2019, 68 countries have plastic bag bans with various labels of enforcement.

Recently, Canada announced to ban single-use plastic in their nation from December 2022. The sale will be banned with effect from December 2023 and the country has also said it will stop exporting such plastic by 2025.

China issued a ban on plastic bags in 2020 with a phased implementation. The European Union issued a directive to ban single-use plastics on July 2, 2021.

Eight states in the United States have banned single-use plastic bags, beginning with California in 2014. Seattle became the first major US city to ban plastic straws in 2018, although environmentalists say these are just piecemeal efforts because the United States ranks as the world’s leading contributor of plastic waste, according to a congressionally mandated report released last year.

While speaking to the media, Union Environment Minister Bhupender Yadav said that control rooms would be set up to monitor and ensure the enforcement of the ban at the national and state levels.

“To curb the supply of identified items, directions have been issued at the national, state, and local levels. For example, all leading petrochemical industries do not supply plastic raw materials to the industries engaged in banned SUP production,’ informed the minister. Those found violating the ban can be penalised under the Environment Protection Act 1986 which allows for imprisonment up to five years, a penalty up to Rs 1 lakh, or both.

Violators can also be asked to pay Environmental Damage Compensation by the SPCB. In addition, there are municipal laws on plastic waste, with their penal codes. SUP Compliance Monitoring portal has also been created. However, massive awareness and advocacy are also important, believe the ministry officials.