Google is celebrating the 30th anniversary of World Wide Web by dedicating a doodle commemorating one of the biggest revolution in the technology world. 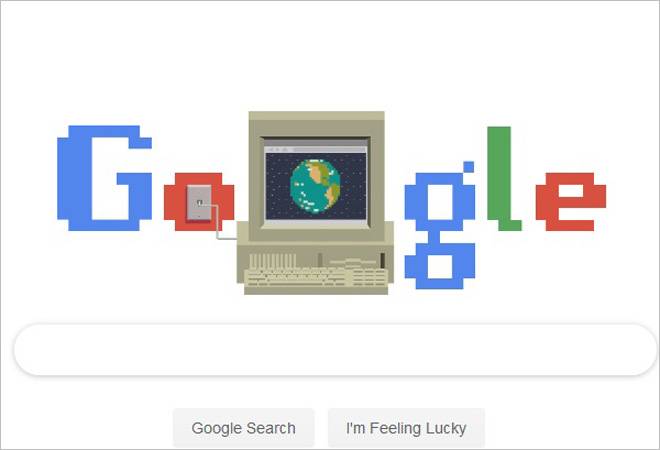 Google is celebrating the 30th anniversary of World Wide Web by dedicating a doodle commemorating one of the biggest revolution in the technology world.  On 12 March 1989, physicist Tim Berners-Lee submitted  a proposal for information management system to help his colleagues while employed at CERN, in Switzerland.

Sir Tim Berners-Lee, while working in particle physics lab, CERN, was frustrated that he had to log on to different computers every time he wanted to access different information, instead of from his personal computer allotted to him by his office. Hence, his extraordinary idea was to create a common language that would open hyperlinks among all the networks.

Sir Berners-Lee then developed a flow chart into a working model and in year 1989, he created all the HTML language and HTTP application - the architecture of WWW.

By 1991, the Web started running all the files and in April 1993 it was made public. The Web became popular after the launch of search engine Mosaic in the same year.

What is World Wide Web?

The WWW you see in your browser's address bar when you access a URL is not the internet, but is a newer invention than the internet.

The internet is a giant network of computers that are united by their ability to communicate and exchange information through a network. So when you go online, your computer is in touch with millions of other computers that are connected to the network - called internet.

However, the Web is way of accessing the internet that is built upon HTML, HTML Text and hypertext transfer protocol. WWW is essentially an application that uses internet to share information in text, videos or any other form.

Any page that begins with http://www is a part of World Wide Web.

Sir Tim Berners-Lee on 30 years of the Web:

Sir Tim Berners-Lee celebrated the birth anniversary of Web by expressing joy and said that he hopes the Web has developed. "How far we've come, but also an opportunity to reflect on how far we have yet to go," wrote Sir Berners-Lee in his letter. "Against the backdrop of news stories about how the web is misused, it's understandable that many people feel afraid and unsure if the web is really a force for good. But given how much the web has changed in the past 30 years, it would be defeatist and unimaginative to assume that the web as we know it can't be changed for the better in the next 30. If we give up on building a better web now, then the web will not have failed us. We will have failed the web," said Sir Tim further.

The Google Doodle on WWW illustrates the technological revolution with an animation of Google written in block graphics. In the centre of Google doodle is a rotating globe on a desktop monitor that is plugged on to a socket. Thirty years down the lane, the Web has changed the lives of billions in many ways. Today, there are more than two billion websites online and the Web has made lives easier by serving variety of purposes.