India and Russia inked as many as 10 pacts, including defence deals worth around $4 billion, as their leaders undertook an extensive review of bilateral cooperation, especially in the field of nuclear energy.

The venue of the meeting between the two leaders was shifted at the last minute from Hyderabad House to 7, Race Course Road - the official residence of the Prime Minister - in view of the large-scale protests after the gangrape incident.

After his talks with Putin during his brief visit of nearly 18 hours, Singh said: "We also discussed regional and global issues, on many of which there is a marked congruence in our approach. The development of our nuclear energy programme has been a key pillar of our strategic partnership." 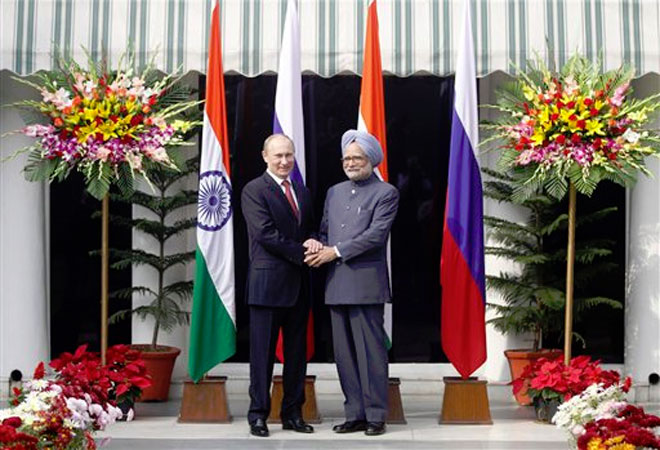 The Prime Minister noted that construction of Unit 1 of the Kudankulam NuclearPower Project was now complete and power generation will commence shortly. He also said India looks forward to the completion of Unit 2 next year.

"Negotiations for the construction of Units 3 and 4 at Kudankulam have made good progress. We intend to continue implementing the Roadmap for cooperation in the nuclear energy sector that was signed during President Putin's visit in 2010 as then Prime Minister of Russia," Singh said.

About their discussions on regional and international issues, Singh said: "India and Russia share the objective of a stable, united, democratic and prosperous Afghanistan, free from extremism, terrorism and external interference. We reviewed the ongoing developments in Afghanistan, and agreed to work together against threats posed by extremist ideologies and drug trafficking".

The pacts include MoU on Cooperation in Science,Technology & Innovation, cultural exchange programme and MoU to promote direct investment which envisages investments upto $2 billion in important bilateral projects or companies, privatisation and other opportunities. 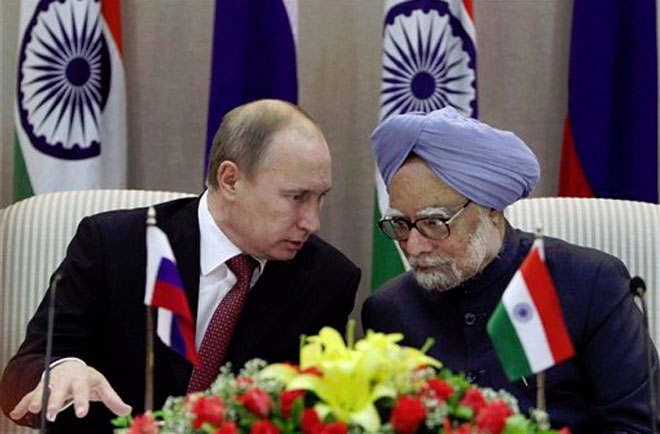 "Russia is a key partner in our efforts to modernise our armed forces and enhance our defence preparedness. A number of joint design, development and production projects are underway in high technology areas. We expressed satisfaction that these projects are progressing well," the Prime Minister said.

"We have asked our inter-governmental and business level groups to recommend specific steps for enhancing bilateral trade and investment flows," the Prime Minister added.

Noting that science and technology cooperation between the two countries remains robust, he said they welcomed the operationalisation of the India-Russia Joint Science and Technology Centres which can assist the development and commercialisation of promising technologies, including nano-technology, bio-medicine and super-computing.

"I particularly welcome the agreement on cooperation in using the GLONASS satellite navigation system that has just been signed," Singh said.