At 0.6 km construction per day, clouds over Jun 2022 completion target of freight corridor

The construction seems to be progressing at an extremely slow rate with only 100 kilometers constructed between January and May, translating into per day construction of slightly more than half a kilometer

The government aims to have an exclusive network of high capacity freight movement tracks through the project (Source: PTI)

The Indian Railways' dedicated freight corridor project, which has seen multiple implementation delays since construction began almost a decade ago, may find it difficult to meet the June 2022 commissioning target.

The government aims to have an exclusive network of high capacity freight movement tracks through the project.

However, the latest progress report compiled by the Dedicated Freight Corridor Corporation of India Ltd (DFCCIL) for the Prime Minister's Office (PMO) indicates delays on multiple fronts like construction of road over bridges, road under bridges and major bridges on the upcoming network of the freight corridors spanning a total of 3,381 kilometer.

The construction seems to be progressing at an extremely slow rate with only 100 kilometers constructed between January and May, translating into per day construction of slightly more than half a kilometer.

Both the corridors are being constructed at a cost of Rs 95,238 crore with funding from multilateral agencies -- World Bank and Japan International Cooperation Agency (JICA).

As per the progress report, even though only less than a year is left for the revised commissioning target of June 2022, the financial progress so far is 71 per cent till May this year. "All contracts of EDFC and WDFC worth Rs 56,952 crore have been awarded and cumulative contractual progress till May'21 is Rs 40,477 crores (71 per cent)," said the progress report.

Also, only 311 major bridges on the alignment have been completed till May this year out of the total 540 bridges, thereby logging an achievement of 58 per cent.

Only 93 out of the total 302 road over bridges (RoBs) have been completed on the network, while the progress is comparatively better on road under bridges (RUBs), where 1,105 out of the total 1,582 have been constructed. This is a marginal improvement from December last year, when 251 major bridges were constructed on the corridor, and 966 RUBs and 84 ROBs were already in place.

It may also be noted that only an additional 100 km have been constructed till May this year on the corridor since the inauguration of the 650-km stretch by Prime Minister Narendra Modi in January this year. The 100-km section that has been completed is the Ganjkhwaja-Chirailpathu section near Deen Dayal Upadhyaya junction on the EDFC.

PM Modi inaugurated the 351-km Khurja-Bhaupur section of the EDFC and 306-km Rewai-Madar section of the WDFC in quick succession in December last year and January this year.

In August last year, the prime minister had held a review meeting on the project. Railway Ministry had attributed the delays to lack of support from state governments after which Modi directed the ministry to regularly monitor the project to ensure timely implementation.

The completion target of the project has been shifted multiple times since 2016 and it has seen massive cost escalation due to the delays from the original estimates of Rs 21,140 crore in 2006 to the current capital cost of Rs 95,238 crore. 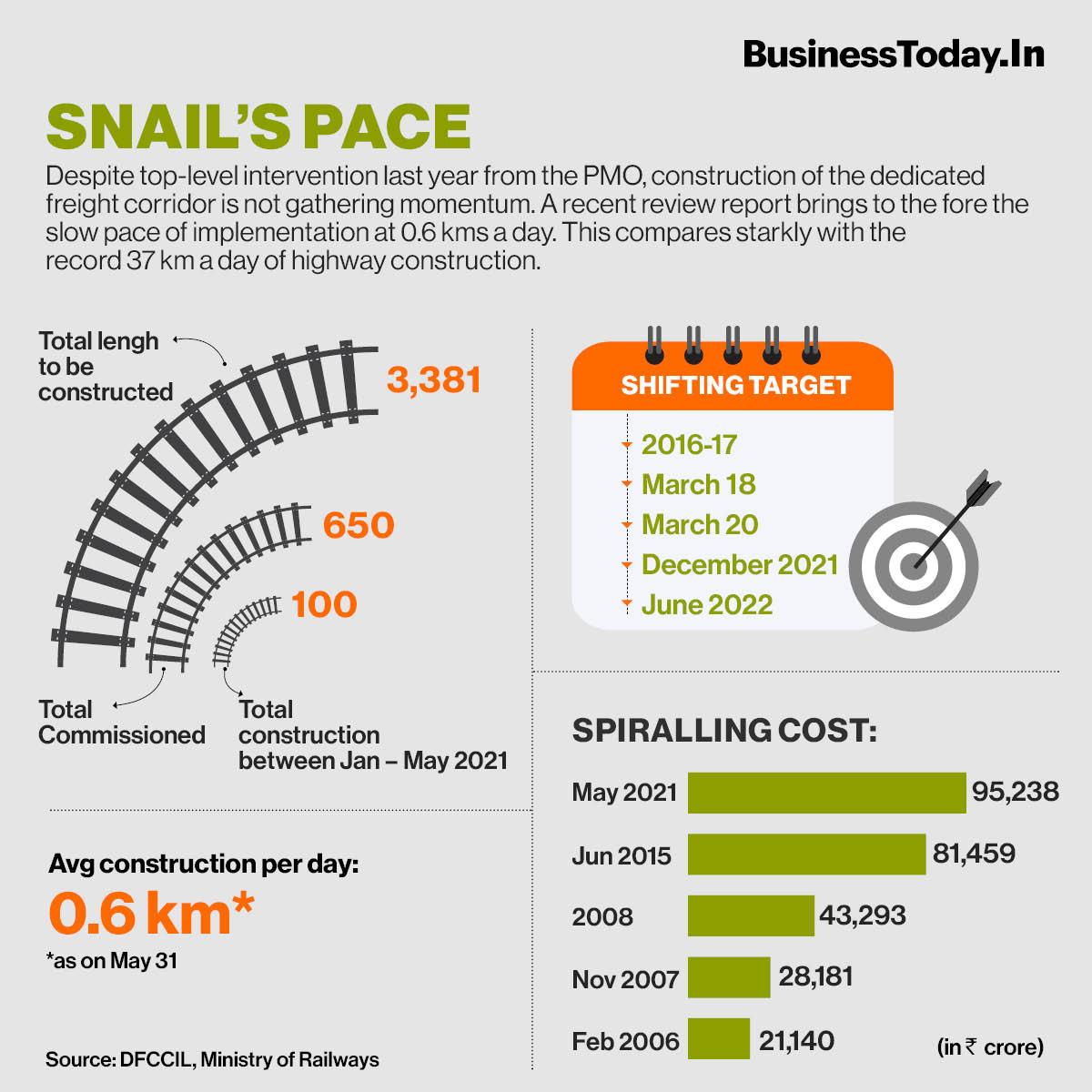