Under his leadership, Reliance Industries has become the first Indian company to cross the $200 billion (INR 15 lakh crore) market cap driven by retail and telecom operations. Within four decades of operation, Reliance Industries becomes the 57th most valuable firm in the world according to Hurun Global 500 Most Valuable Companies 2021.

Raking second on the list is Adani Group Chairman Gautam Adani, whose wealth rose 261 per cent to Rs 5.05 lakh crore. He jumped two places to secure the second position on the list. The Adani group has a combined market capitalisation of Rs 9 lakh crore, and except Adani Power, all listed companies are valued at more than Rs 1 lakh crore. 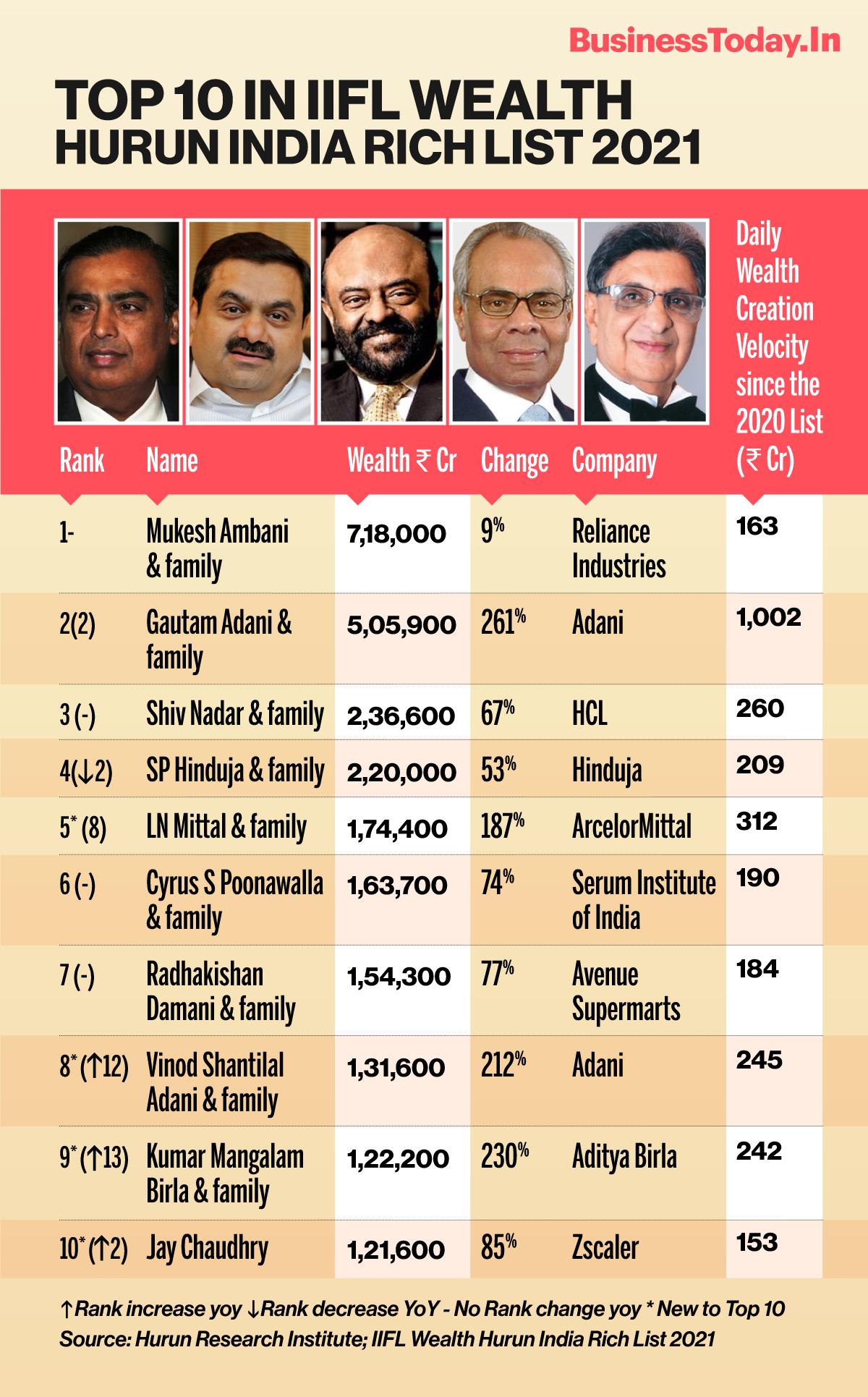 "Gautam Adani is the only Indian to build not one, but five INR 1 lakh crore companies," said Anas Rahman Junaid, MD and Chief Researcher, Hurun India. Shiv Nadar & family maintained its third position with a 67 per cent increase in their wealth to Rs 2.36 lakh crore. "HCL's limited exposure to COVID affected segments such as travel, retail and hospitality resulted in a 67 per cent increase in his wealth," said the Hurun report. For the 12 months ending in December 2020, HCL became only the third Indian IT company to break through the $10 billion revenue mark.

SP Hinduja & family saw a 53 per cent change in their net wealth at Rs 2.2 lakh crore. Their ranking dropped two places to 4th this year.  The brothers are based between Mumbai, London and Geneva.

Number 6 on the rich list is Cyrus S Poonawalla & family. There was no change in their ranking this time despite the company making billions of dollars in deals with regard to Covid-19 vaccines. His company is provided 92 per cent of Covid-19 vaccines delivered in India.

In June 2020, Poonawalla debuted the Top 100 in Hurun Global Rich List. His son Adar was one of three Indians featured along with Prime Minister Modi in the recent Time Magazine's 100 Most Influential People 2021.

Radhakishan Damani & family saw a 77 per cent change in their wealth to Rs 1.54 lakh crore. However, their ranking in the list also remained unchanged. Since its IPO in 2017, his Avenedue Supermarts' share has risen over 500 per cent.

Himachal Pradesh born IIT alumni founded the cyber security firm in 2007 and currently owns 42 per cent of the Nasdaq-listed firm, which has a market cap of Rs 2,81,000 cr.