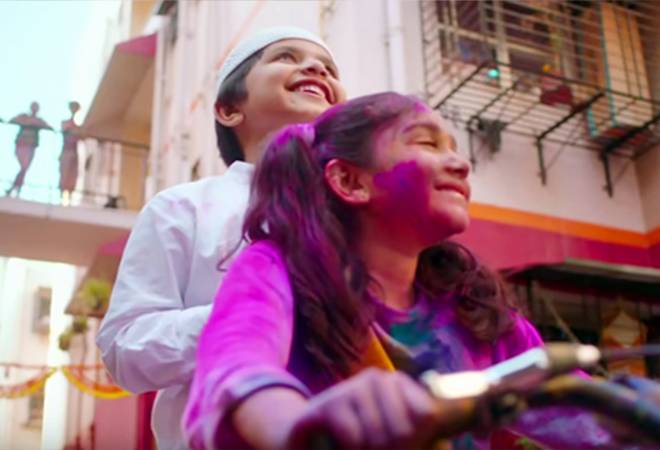 Days after Hindustan Unilever was panned for its Kumbh Mela advertisement, social media has directed its rage on detergent brand Surf Excel. The ad and its resultant hashtag #BoycottSurfExcel have been trending on social media over the weekend. The ad in question is the detergent brand's Holi campaign that shows the bond between a Hindu girl and a Muslim boy.

The ad shows a small girl in a white t-shirt riding a bicycle and urging kids of her neighbourhood to throw colour water balloons on her. As she rides her bicycle through the lane, kids throw balloons on her, spattering colour all over. Once they run out of balloons, she signals her friend to come out. The friend turns out to be a Muslim boy who is wearing an impeccably white suit. She takes him on the bicycle and drops him at the nearby mosque where he has to go and pray. The ad is closed with the brand's popular tagline, "Daag achche hain"(Stains are good) .

While a section of social media is lauding the company for its message of peace and love between the two communities, Surf Excel has faced incessant backlash from another section. Calls to boycott the detergent emerged following tweets that said that ad promoted love jihad and that the ad shows that Namaaz is more important than Holi. Some users also asked Surf Excel to make an ad on Muharram where a Muslim boy is shown protecting a Hindu girl to the temple. One user said, "Surf Excel ad is humiliating Muslim girls to the core... it is directly saying that a Muslim male child needs help of a Hindu girl for doing his prayer. This is shaming and humiliating all Muslim children."

Ordered and refused SurfExcel... just to teach lesson to UniLever.... Shame on UniLever for promoting thier sale through Live Jihad pic.twitter.com/9CSEixHydz

If they want peace then why they make this ad. They have no rights to disrespect any religions festival.#Shameless#SurfExcel

#BoycottSurfExcel One of the worst Ad ever by Surf Excel. It should be rolled back and @HUL_News should apologize for hurting sentiment of our religion.#BoycottSurfExcel

However, a lot of people have also tweeted in favour of the ad and questioned how anyone can not support this message of love and peace. "Well done #SurfExcel for promoting religious harmony in these times! Great ad too. Ignore the haters," tweeted actor and producer Konkona Sensharma. "He who objects this ad by Surf Excel is nothing but against the idea of India. Hatsoff who created this beautiful film (sic)," tweeted Congress leader Sanjay Nirupam.

Well done #SurfExcel for promoting religious harmony in these times! Great ad too.

He who objects this ad by #SurfExcel is nothing but against the idea of India.

Hatsoff who created this beautuful film.#JaiHindhttps://t.co/YysT5d3W13